The next steps for Next Issue 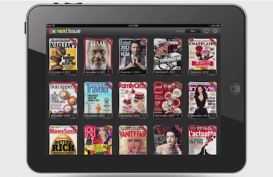 The Netflix of magazines – Next Issue – is coming to Canada. However, unlike the video streaming service that inspired it, subscribers here won’t have to perform internet connection gymnastics to access good content.

The service comes in the form of an app for Apple, Android and Windows tablets and PCs, and it offers unlimited access to more than 100 magazines, including big international names such as Sports Illustrated, Oprah Winfrey’s O, GQ, Esquire, Wired, Time and so on for $9.99 a month, or $14.99 if weeklies are included.

Joining them on Oct. 15 will be Rogers Media publications including Maclean’s, Canadian Business, Chatelaine and others. Americans will get access to the Canadian magazines on that date, which is also when the service launches for Rogers’ customers. The rest of Canada gets Next Issue on Dec. 15.

The upsides of the venture are many. For consumers who already subscribe to a magazine, it’s a fantastic service at a great price. With individual subscriptions running a couple of dollars per month, Next Issue offers tremendous value since it’s only a few dollars for more content than anyone could ever want.

I subscribe to Wired, for example. There are plenty more magazines I’d like to buy, but that one publication pretty much eats up how much I’m willing to spend per month on that particular category of goods. Next Issue changes that since a few extra bucks gets me access to all those magazines I’d like to read, but am not willing to pay full freight for. I imagine that will be the case for many readers too.

Ken Whyte, president of Next Issue Canada – a joint venture between Silicon Valley-based Next Issue Media and Toronto-based Rogers Media – says that’s exactly the intent. I asked him why I shouldn’t just ditch my Wired subscription and sign up to the app instead. “I think you should,” he said. “It’s great value. There’s thousands of dollars of great magazines on there.”

The service benefits publishers too, he says, because each magazine gets a cut of Next Issue’s monthly fees based on “dwell time,” or how long subscribers look at them. Readers might thus sign up to get access to, say, Maclean’s and Canadian Business, but they could also end up putting money in Time‘s pockets. That’s revenue that wasn’t there to start with.

“There’s a tendency by people to use Next Issue to sample magazines, the average is close to 20 per user,” he said. “It really spreads the audience across more brands. It brings in people who just weren’t inclined to subscribe to a print magazine.”
Advertisement

I tried the app out and it really is as simple as it’s made out to be. Magazines are organized alphabetically; you simply tap on the ones you want to add to your personal collection, then tap again on each individual one to access its full library. New digital issues hit at the same time as printed versions, or earlier, and some – like Wired and Esquire – have interactive features such as embedded videos.

Once they’re in your library, individual issues can be downloaded and read offline. That’s an important feature, since many people like to read magazines in places where there is no internet connection. I do the majority of my reading on planes, for example. (Coincidentally, it’s great to see that aviation authorities are finally going to allow the use of electronic devices during takeoff and landing.)

Next Issue chief executive Morgen Guenther says the app is going to get some big upgrades by the end of the year, with the ability to search magazines as well as Netflix-like recommendations being added. An iPhone app is also in the works.

Perhaps the biggest winner from all this are Canadian magazines and the people who write for them (guilty as charged). Many of the publications will be available in the United States for the first time, representing a dramatic expansion of their potential readership. And the best part is, Next Issue subscribers in the United States get access to these Canadian magazines for no extra cost. Publications such as Chatelaine and MoneySense stand to attract many new readers as a result.

This is unusual when it comes to any sort of Canadian cultural product, and especially when it involves a Canadian telecommunications company. Whyte said as much during his opening remarks on Thursday when he referred to the launch as historic.

“We’ve had an attitude of cultural protectionism, but the outlook has changed. Canadians want to see our magazines stand with the best in the world,” he said. “We are going global as a Canadian content company.”

All of that notwithstanding, there are plenty of criticisms of the service. Gigaom writer and former Globe and Mail community editor Mathew Ingram, who has written more than anyone I know on the issue of media adapting to the internet, thinks it’s a bad idea. Next Issue just doesn’t fit with how readers are consuming content, he wrote last year after the service launched in the United States:

This trend, where users of services like Twitter and aggregators like Flipboard or Zite or Prismatic rely on their social graph and increasingly intelligent algorithms to find the content they want, just doesn’t fit with the model that Next Issue has in mind — where readers stand and look at the front covers of specific magazines and then drill down into one, then come back to the newsstand and choose another, and so on.

As he commented on Twitter on Thursday, the model won’t save the magazine business: it will “maybe slow the decline a bit, which I suppose is better than nothing.” Some people might pay for Next Issue, just as some are paying for paywall subscriptions for newspapers, but that won’t stave off the larger problem that the model of money-for-stories is somehow fundamentally broken.

That could very well be the case for newspapers, but I’m not so sure it applies to magazines. As Ingram writes in a related post, people will apparently pay for all-you-can-eat entertainment such as Netflix or Spotify, but not for news. Magazines, however, rest somewhere between the two. People generally seek them because they feature longer, more in-depth stories, which are typically consumed during leisure time. As leisure activities, they can therefore almost be considered entertainment. So maybe people are willing to pay for them?

There’s also the question of whether people want to read magazines on a screen. If they’re at leisure, after all, don’t they want something physical and tactile with which to relax their screen-weary eyes? That’s a fair comment, but it’s at odds with the suggestion that people are seeking out content through their social graphs. That’s all done online — on screens. So yes, if there are people who want to read long articles, there probably are many who want to read them on tablets.

The issue so far – which Next Issue firmly addresses – has been one of value; no one has made it really appealing to pay for digital magazines before. Funnily enough, these are not criticisms that get leveled at Netflix, despite the two services being very similar. By many accounts including its own, Netflix is having a dramatic effect on piracy, with chief executive Reed Hastings recently saying Bittorrent traffic has declined by half in Canada since the service launched here three years ago. People can still get movies and TV shows for free, and plenty do, but many others have bought into Netflix’s value proposition.

By the same token, people can still get much of the content featured in their favourite magazines for free, but it’s the same situation as with Netflix. Having it all in one attractive and easy to use place is convenient. Millions of people are paying for Netflix, even when a lot of its content – at least here in Canada – isn’t all that great. That’s not an issue for Next Issue.