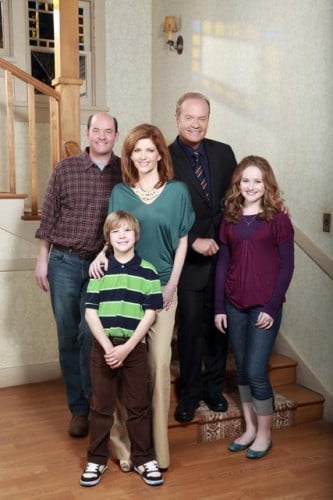 Two comedy pilots for this season that didn’t exactly thrill me were what we might call the Back To You pair: The Middle, a single-camera quirk-com starring Patricia Heaton, and Hank, a multi-camera quirk-free comedy with Kelsey Grammer. The former incorporates too many clichés of its genre, like the abrasive tone, the voice-over narration, the wacky flashbacks, and the determination to give almost every character some kind of wacky dysfunction. It may get better, but it may not, since this is exactly the type of show that tends to burn itself out fast.

The latter is just a bog-standard comedy with an equally clichéd subject (a rich guy adjusting to not being rich; a guy moving back to his old home town), cursed with dull jokes and the usual dull direction from James Burrows, who has been coasting on his reputation for something like eight years now. It seems to depend on its topicality to sustain it — except that it’s no longer particularly topical. In real life, Grammer’s Hank wouldn’t have been forced to move to his old home town and adjust to a middle-class lifestyle, he’d have been bailed out and kept in charge of his company. And as I said in another post, the discussion of Obama’s “Yes We Can” slogan just screams “written in 2008.” Which is why trying to be topical and up-to-date rarely works, because a lot can change in a few months. (This doesn’t apply as much to topical allegory, like V, because the allegorical symbols don’t have to stand for any one thing, and the producers can adjust the writing to keep up with the times. But when a show has nothing going for it except topicality, it’s screwed as soon as anything changes anywhere in the world.)

One of the many problems with the pilot of Hank was the opening scene, which was so dull that I wouldn’t be surprised if they change it by the time it airs. It began with a prologue, showing Grammer and his wife moving out of their old apartment; they spend the scene delivering exposition by telling each other things they already know. It reminded me of an important rule I just made up arbitrarily: if a sitcom pilot begins in a different city from where the show will actually take place, simply for the purpose of showing us where the hero used to be before he moved to the main location of the show, beware. It’s not an absolute rule, of course; the makers of a show like this could rightly point out that The Beverly Hillbillies was one of the biggest hits of all time, and that show began with a prologue in the mountains.  But sometimes, when a show has only a litle over 20+ minutes to tell its first story, and spends a chunk of that time on a set and location we will never see again, that could be a sign that there’s a bigger storytelling flaw in the show, or that the network didn’t have enough confidence in the concept to just let it begin at the beginning.

This even applies to shows that don’t start the pilot in the wrong city, but do start it on the wrong set. One of the reasons the pilot of The Big Bang Theory gave the impression of a show with a lot of problems and major flaws to work out (and a show that had been revised a lot before airing, which it was) was that it began not on the main set, but in a building we would never seen again on the show. The most confident-looking comedy pilots, the ones that give the impression of shows that know what they’re doing from the beginning, usually begin on the main set and drop the main character directly into the show’s world, like Diane walking into the Cheers bar.  Even on How I Met Your Mother, a show which uses narration and time-jumping and stuff, the first scene in “our” time (after the first few seconds where Older Ted talks to his children) takes place in Ted’s apartment, and the next scene takes place in the bar. If the show catches on we’re going to be spending most of our time on these sets; we might as well see them immediately.

FILED UNDER: Hank The Middle