The problem with Trudeau's ladies night

Quit treating all women as one special interest group 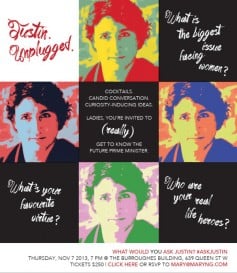 Last night I had the pleasure of attending Justin Unplugged (not to be confused with Justin Bieber Unplugged at the Apollo): the heavily criticized $250-a-head Liberal party women’s fundraiser and Q&A that made national headlines for its perceived sexism. In case you missed it, the event’s detractors took aim at the #askJustin PR campaign on Twitter yesterday: namely at the event’s Andy Warhol inspired Evite portraying Trudeau as a teeny bopper heartthrob—not a serious political candidate. The Evite, which could also pass as an early 90’s Bar Mitzvah invitation, poses questions such as “what is your favourite virtue?”, “who are your real-life heroes?” and “what is the biggest issue facing women?” “Ladies,” it reads, “you’re invited to (really) get to know the future Prime Minister.”

Addressing about a hundred women and a few men at the historic Burroughes Building on Queen St. West last night, Trudeau was lighthearted about the mini-scandal that had occupied his day. He sat proud and cool against the backdrop of an exposed brick wall. “Oh Justin, what a terrible thing you’ve done” he joked, mimicking those who disapproved of the invitation. Trudeau couldn’t see what all the fuss was about. “I mean it’s just an invite to a fun event,” he told me later. And neither could the night’s beleaguered organizers who had spent all day, presumably, answering the media’s questions about sexism. “The fact that an invitation could cause women to think there was sexism involved in this event was really upsetting to me,” said Lindsay Mattick, a Liberal volunteer who oversaw the invitation’s design. “This was an event designed by women for women.”

It was. Pinot Grigio flowed freely, the candies (Starburst, Smartfood, gourmet macaroons) sat virtually untouched and the playlist was right out of Skins (Lorde, Phantogram etc.) It was like no political event I have ever been to. The lighting was flattering. Some of the chairs were upholstered in cowhide, and the coat check was efficient. A Turkish Canadian woman told me that she knew Justin Trudeau was going places when she saw him MC an event for the Dalai Lama many years ago. Another woman with long blonde hair, in a black, shimmering floor length dress and stilettos defended the allegedly sexist event invitation. “There will always be the critics,” she said. “It was supposed to be a bit tongue and cheek, self-referential.” Liberal volunteer Suzanne Cowan lauded the #askJustin segment. “Open mic night with a leader of the party?” she asked. “I don’t think Mulcair and Harper are doing those kinds of things.”

“This is about reaching a new audience and trying something different,” said Christina Topp, the party’s fundraising director. “The relaxed atmosphere is fantastic.”

Maybe it’s a bit too relaxed.

When it came to the #askJustin segment, we didn’t ask Trudeau questions to his face as we would in a regular Q&A. Instead, we wrote our questions down anonymously on little monogrammed #askJustin cards and placed them into a glass receptacle, health class style. And in true health class style, the unseemly questions were eventually sorted out (I know this because my “team Edward or team Jacob?” question didn’t make the cut). Can you imagine a room full of men at a political gathering stuffing anonymous missives discreetly into a box?

One of the event organizers, Amanda Alvaro sat beside Trudeau and read him the list of curated questions, the most difficult being which foreign state do you admire most. Everything Trudeau said was met by the audience with a deep and near universal sigh, or sometimes, hearty laughter. But as usual there was little political meat in his remarks. They felt rehearsed: platitude and deflection heavy. Trudeau will eventually have to ingratiate himself with those of us who don’t think he’s so pretty. And it may not be easy.

It is easy though, to dismiss the women of Justin Unplugged as self-inflicting sexists; fan girls blinded by their crushes on the handsome leader of the Liberal party. But to do so would be grossly unfair. Yes their flyer is mildly sexist. It’s a bit obnoxious and makes many of us cringe. If you want to get really critical, it sexualizes both candidate and voter and dumbs them down as well. But these women stand by their product and their event—at which everyone seemed to have a really awesome time. (They also raised just under $30,000 for a charity, the LPC affiliated Judy LaMarsh Fund, that supports women in politics). So what’s really the problem here? If these women aren’t offended by their fun and flirty take on political gatherings why should we be? What’s the big deal?

The big deal, in the end, is that one small group of women, by no real fault of their own, is representing an entire gender. Imagine if the event had still raised money for a women’s cause, kept its flirtatious tone but advertised itself as gender neutral. People would continue to make fun of it, no doubt, but chances are that few of them would get angry or call sexism. For now, perhaps we should all consider this:

Women (surprise, surprise) are different from one another and when some women—the kind who like Cosmos, say—speak for the kind who like scotch—things get sour. Nobody likes to be spoken for, and women have progressed to a point in this country where we no longer need to speak for one another. Yet we keep on doing it. We operate like a special interest group when we aren’t one. We have less and less in common every year—a good thing and a testament to progress in general. Maybe the problem then isn’t sexism at women’s events. Maybe it’s the events themselves.