An unofficial collection of the PM’s freely available writings, for all your educational or objectionable purposes 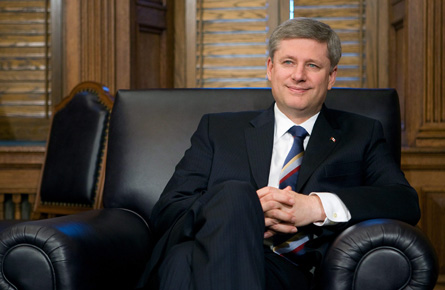 Interestingly enough, Stephen Harper’s Parliamentary bio does not list him as minivan-driving middle class hockey dad, but as an “author, economist, lecturer.” Unfortunately, the Prime Minister lacks the easily accessible paper trail of his primary rival. Though there are a few good reads to be found.

There is, for instance, Our Benign Dictatorship, a meditation on Canadian democracy co-written with Tom Flanagan in the 90s. There is also the Alberta Agenda proposal (the so-called “Firewall letter”), an open letter sent to Ralph Klein in 2001. Not to mention the famous (infamous?) speech to the National Council on Policy in 1997.

His Parliamentary page lists two books—his 1991 Master’s thesis and his 2003 agreement with Peter MacKay to establish the Conservative Party of Canada. Two articles for Time magazine are mentioned, but neither seem to be accessible through Time’s website. His writing for Report magazine appears to be available, if you have a subscription to High Beam. Reprints of various speeches published in Policy Options are available by searching that archive. His essay for William Gairdner’s After Liberalism is available if you buy the book. Copies of his speeches while with the National Citizens Coalition are not available. Copies of his speeches as Prime Minister are here.

Before becoming Prime Minister, Mr. Harper penned numerous letters, op-eds and the like for the National Post and Globe, but those pieces don’t appear to be online (unless, say, you work for a national magazine and have an account with Infomart). The Post, in particular, has a large stash of the Prime Minister’s writing and would likely stand to generate significant web traffic by making such stuff available (just saying).

Otherwise, you can fiddle around with the Internet Archive in search of whatever remains from oneconservativevoice.ca and stephenharper.ca. Or sacrifice hours to reviewing old copies of Hansard.