The royal baby: What's in a name? 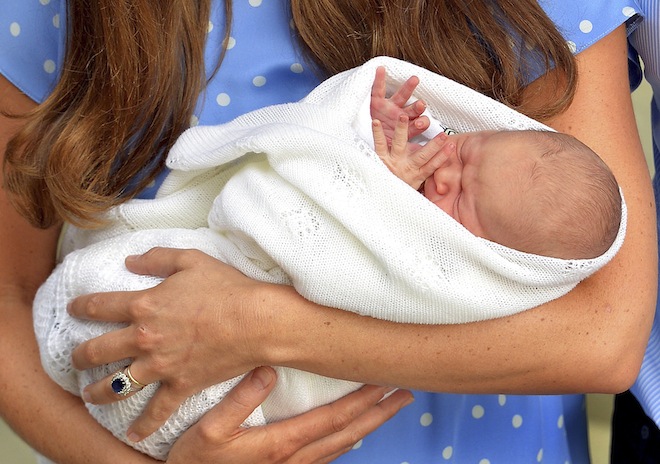 If the three names bestowed upon the newest member of the house of Windsor sound familiar, that’s because William and Kate, sticklers for tradition and family, picked names that resonate in the long history of the British monarchy. HRH Prince George Alexander Louis of Cambridge is the son of William Arthur Philip Louis (Prince William), the grandson of Charles Philip Arthur George (Prince of Wales) and the great-great-grandson of Albert Frederick Arthur George (George VI).

George had always been a firm favourite of betting agencies throughout Kate’s pregnancy, in part because it’s one of the most common recent monarchical names—of the last 11 sovereigns, six have been Georges. And it’s the last, George VI, who is likely the inspiration for the choice, for he is the Queen’s beloved father. Known as Bertie to his family, he took the throne in 1936 after his eldest brother, Edward VIII abdicated. Taking the name of his late father, the stable, stolid George V, his struggle to tame his stammer, and his dutiful acceptance of a throne for which he was woefully unprepared, won him the loyalty of a generation scarred by the Depression and the abdication crisis. The workload and pressure during the long Second World War broke his health. He died in 1952, aged 56.

Though George is the patron saint of England, the name didn’t grace a monarch until 1714, when the Hanovarians took over Britain with George I. When the new baby comes to the throne as George VII, he’ll follow in the steps of a mixed bag of monarchs: George III suffered through bouts of madness—though known as the man who lost the American colonies, he’s also the monarch that Prince Charles respects the most—while George IV was a flamboyant, artistic spendthrift.

While the second name, Alexander, hasn’t graced a king, its female form, Alexandra, is the second name of Queen Elizabeth II and the first name of the Danish beauty who married Edward VII. And Alexander is a common name within the family of the new baby’s great-grandfather, Prince Philip, who was born into the Greek royal family. And that’s also the case when it comes to the babe’s third name, Louis, which is almost certainly named after Philip’s uncle, Lord Louis Mountbatten of Burma, and his grandfather, Prince Louis of Battenberg. Both were Royal Navy officers, rising to the title of admiral of the fleet. And in the case of Lord Louis, he was a mentor to both Philip and his oldest son, Charles. He was assassinated in 1979 by the Provisional IRA while on a boating trip with his family. His mother-in-law, grandson and an employee were killed.

In the end though, the latest royal George has been bestowed history-laden names and will grow up in palaces and castles. He will shape his own destiny.