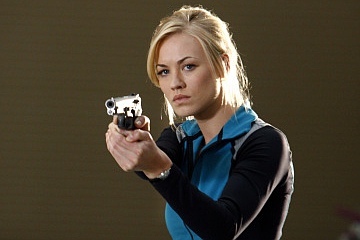 There’s a new batch of “will Chuck be canceled?” talk because of NBC’s decision to pick up a similar lighthearted spy show from J.J. Abrams. Personally I don’t think this pickup will have much effect one way or the other, since NBC has known for some time that they were likely to buy the Abrams project. They have undoubtedly factored that into their decision making, and yet Chuck has continued to be, while on the bubble, at least a potential candidate for a pickup. All the Undercovers pickup means is that they now officially have another spy show, but that actually gives them more options for Chuck, not fewer — they can advertise the shows as cousins, or pair up the struggling Chuck with Undercovers, which may have more hit potential.

I figure that, being an Abrams production, Undercovers will make Chuck look like a model of good stand-alone storytelling by comparison; I’m not really looking forward to seeing this subject get smothered in conspiracies and ongoing double-crosses. Yet I still get the feeling that it may have a chance to be more satisfying than Chuck, if only because of the decision to build the show around a spy couple that actually has a relationship, and a reason for liking each other. That, along with the fact that she has actual family relationships and such, may give Gugu Mbatha-Raw the chance to apply a fake American accent to something resembling a real character. And that would be a big improvement over Sarah on Chuck, who increasingly seems to me like the show’s weak link.

Having said that, I’m not really blaming Yvonne Strahovski. Not much, anyway. I don’t find her very interesting, with her blank stare and voice; she doesn’t make a spectacular impression when Sarah masquerades as other people, and she’s repeatedly out-classed by the female guest stars on the show (and it’s not like Kristen Kreuk is some kind of amazing super-talent who blows everyone else off the screen). I think it’s fair to assume that the show could have built Sarah into a stronger character if Strahovski had added more in performance; lots of characters start out bland and get better as the writers see what the actor can do.

But there is simply no telling how good or bad of an actress she is, or how much she could have added to her character: she doesn’t have a character to play. As written, Sarah is Fantasy Girl, the projection of every nerd dream, whose personality (such as it is) exists only to place her where the plot needs her to be: she must be attracted to Chuck, so she is given certain traits and personal issues that make this halfway plausible. The biggest trap a show like this can fall into is to create a heroine who is defined solely by her relationship to the hero, and I think Chuck usually falls right into that trap.

This would not be a major problem if the show was totally focused on the hero, with everyone else playing second banana to him. But Chuck has chosen to make the romance, and the Chuck-Sarah relationship, a huge part of the show. She’s not 99 from the first three seasons of Get Smart, the klutzy hero’s beautiful Dr. Watson; the show really wants us to care about where they’re going as a couple. But I personally (it goes without saying that this is my personal reaction, not what anyone else needs to believe) can’t care about her, because I don’t think she emerges as a person with interests and motivations of her own. The way to make Nerd Fantasy Girl into a real person is, usually, to give her non-romantic relationships of interest (i.e. Penny’s relationship with Sheldon on The Big Bang Theory, which almost single-handedly saved her from being an NFG), but I feel like Chuck has tried to do that and not really succeeded, particularly when it comes to her rather perfunctory relationship with Casey.

Update: Some plausible points from a Sarah-defender who argues that the character (and the performance) has depth that I have missed, just not obvious depth.

Yvonne shows more with a smile and glance than almost any actress I’ve seen on television. And if you were actually paying ATTENTION to that you’d realize this is a much more complex character than what she appears to be on the surface.

And it’s PRECISELY because of who Sarah is: She’s a woman who’s life was spent with no REAL identity of her own. She was a pawn in her father’s scams and almost her entire childhood was spent being other people. Then right away she’s thrust into the CIA, where once AGAIN her life is spent being other people. Sarah is NOT a character that’s accustomed to putting her feelings out there. We know it from dialogue from Bryce in Season 1 that she’s not good about being up front about herself, and the first time she DID take that chance and put her feelings all out on the line, Chuck burned her (3×01). Her behavior in Season 3 was a direct extension of that as she withdrew into herself.

I’m not personally sure that “subtle” is the appropriate mode for a show like this, but as I say, it’s a plausible point.