Colby Cosh on pie slices and the boundaries commission

It is my duty pursuant to section 21 of the Electoral Boundaries Readjustment Act to lay upon the table a certified copy of the reports of the Federal Electoral Boundaries Commissions for the provinces of New Brunswick, Saskatchewan and British Columbia. These reports are referred permanently to the Standing Committee on Procedure and House Affairs.

The Speaker of the House of Commons, Andrew Scheer, uttered these words Monday. As it happens, one of the reports he plopped down before the House touches closely upon the interests of his other (secret?) identity as Member for Regina-Qu’Appelle. The proposed riding map for Saskatchewan is by far the most controversial of the 10 now approaching finalization. It’s so controversial that one of the three commissioners appointed to draw the map refused to sign off on it, filing a minority report instead.

This is thought to be the first time that a Canadian boundaries commission has split irreconcilably in this way. It’s a nasty failure, since the whole point of a boundaries commission is to use logic to arrive at a broadly acceptable nonpartisan consensus. A conscientious government would be careful to avoid trouble of this sort from the outset, but apparently nobody saw it coming.

The problem isn’t partisanship as such. For the past few decades Saskatchewan’s federal riding map has had a unique “pie-slice” nature whereby there are no constituencies wholly within either of the two major cities. The good folks in southwest Regina, for example, have voted in the Palliser riding, alongside residents of Moose Jaw, since 1996. Voters in the northeast of the city are in the Regina-Qu’Appelle riding, mixing their votes with those of a half-dozen small towns like Indian Head and Wynyard—the latter being almost 200 kilometres away by road.

This arrangement was originally tolerated on the premise that in Saskatchewan there are no meaningful differences of culture or interest between the city and the country. All are one under the sign of the wheat sheaf. This seems to have become a perverse point of provincial pride, much like the lack of a sales tax in Alberta; the boundary commissioners were told often at public hearings that there is no such thing as “urban Saskatchewan” for political purposes. Two of the panelists dismissed this argument, snortingly, and created five new all-urban ridings, three in Saskatoon and two in Regina. The third member of the commission, David Marit, feels so strongly about the truth of the argument that he is willing to jeopardize the whole mapmaking exercise by refusing to sign a unanimous report.

What the people making this argument really mean, naturally, is that the “pie-slice” system has allowed rural Saskatchewan and the satellite cities to dominate or at least counterbalance Regina and Saskatoon in federal elections. Dissenter Marit is the president of the Saskatchewan Association of Rural Municipalities; I suppose he would have us believe he wants the big cities to remain divided for some other purpose than “divide and conquer.” But, of course, anybody who followed the 2011 election knows how the rural tail ends up wagging the urban dog under the existing system. The New Democrats picked up 32.3% of the vote provincewide, but this translated to zero seats in Parliament; the Liberals, with 8.6%, recaptured Ralph Goodale’s Wascana seat quite comfortably.

I took a look at the poll-by-poll results from the election, counting only the Regina and Saskatoon votes within the mixed ridings. These totals exclude advance and mobile polls. 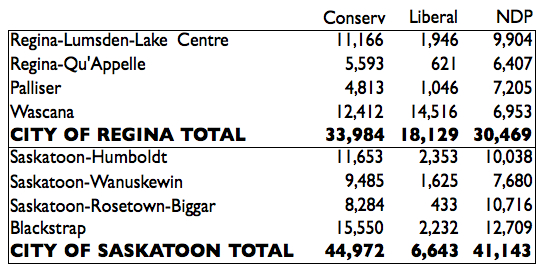 As you can see, within the major cities the New Democrats are very competitive indeed with the Conservatives. (Though it’s also worth noting, lest any myths of extreme injustice and skulduggery flourish, that the Conservatives do seem to have “won” both metropolises.) Palliser MP Ray Boughen, a former mayor of Moose Jaw, would have gotten his clock cleaned if not for the Moose Javian votes. Farmer Nettie Wiebe, the NDP candidate in Saskatoon-Rosetown-Biggar, won a majority in the city and got beaten narrowly (for the third time in a row) on the strength of rural votes. And, sure enough, Speaker Scheer got fewer votes within Regina than the NDP’s Fred Clipsham.

It remains to be seen how well Thomas Mulcair’s “Western strategy” will ultimately work out, but in essence the Conservatives will start the 2015 campaign a couple seats down in Saskatchewan by virtue of the new electoral map alone. That is assuming the Conservatives in the Procedure Committee don’t use David Marit’s dissent as a pretext to go after the new map with a fat blue pencil. Vigilance is urged.