The Simpsons Was Actually Right About Jim Carrey 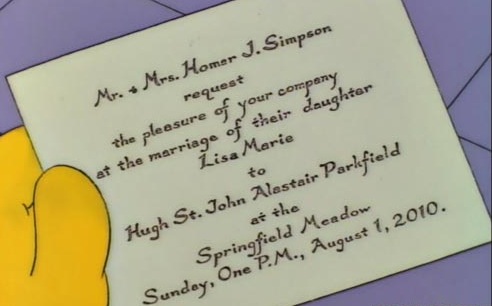 August 1, 2010 was a pretty important day: it was the day Lisa Simpson almost got married to Hugh, the Englishman who confused us all by being voiced by Mandy Patinkin rather than Hugh Grant.

I was going to ask for opinions on the 2010 predictions contained in that episode, but it turns out someone has already done them: 11 predictions about 2010 that The Simpsons got right, and 11 predictions they got wrong. However, I’m going to disagree about # 3 on the “wrong” list. Maybe Jim Carrey hasn’t made 40 classic films, but the joke in 1995 was that people in 2010 would take the “Ace Ventura” star seriously. And, in fact, we pretty much do take him seriously now, thanks to his romp through dim cinematography and non-linear storytelling in Eternal Sunshine of the Spotless Mind. So unlike the British bailing the U.S. out in World War 3, it’s plausible that some couple, somewhere, is discussing the magic of Jim Carrey.

The next question is, when we get to 2030, the year “Bart To the Future” apparently takes place, will we be talking about things that episode got right or wrong? My prediction is that we won’t be talking about it quite as much, because that episode was terrible. But that prediction, like predictions of crying short-circuiting robots, may not come to pass.