The Strangest Re-Tool Of Them All 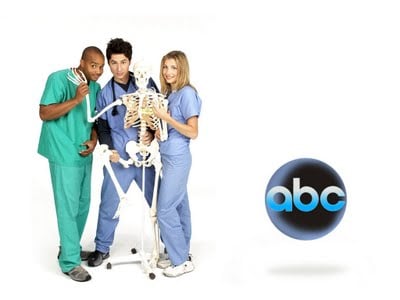 After Alan Sepinwall posted this interview with Scrubs creator Bill Lawrence, there was some discussion of whether any show had done this before: make so many drastic changes — in cast, premise, and setting — that it’s essentially a spin-off show with the same title. There are very few, it turns out. Jason Mittell came up with The Practice, whose final season David E. Kelley basically turned into a season-long backdoor pilot for Boston Legal. Apart from that, nothin’. There have been other shows that re-vamped as drastically as Scrubs, but they always changed the title to indicate that this was not the same show. So when everybody had left All in the Family except Archie and it became the story of him running a bar with a bunch of new characters, it became Archie Bunker’s Place. Three’s Company married off Jack Tripper and dumped his two roommates; it became Three’s a Crowd. Even with three out of four Golden Girls running that hotel with Don Cheadle, it had to be retitled The Golden Palace. But though Lawrence says he wanted to do the same with Scrubs, calling the new season “Scrubs Med,” ABC said no. Stephen McPherson, head of ABC, said it had to remain under the same title because “he wants to keep the brand.”

What this shows is that Scrubs, ABC and television are all in kind of a weird position. Scrubs is not a true hit show and never has been, but it always does just well enough with a demographically-desirable audience that it’s in a network’s interest to keep it around (or at least the network that owns it, ABC; NBC dropped it because there’s not as much in it for them). In the past, when a show had run this long and had ratings comparable to Scrubs‘, a massive re-tool was obviously a desperation move, and changing the title was the best idea for one of two reasons. Either the parent show’s ratings were sinking so badly that it was a good idea to make it clear that this was a different show — potentially pulling in those who hadn’t watched the original — or the producers wanted to change the title for fear of damaging the brand of the original. (The Golden Girls would suffer in syndication if the Golden Palace episodes were part of the package.) But ABC doesn’t expect Scrubs to get good ratings, just good enough to fill a spot while they’re looking for new comedies; it’s a very old, effective utility player. And as Lawrence mentions in the interview, its syndication shelf life isn’t huge, so the issue of the re-tooled episodes hurting the brand isn’t really that important.

Or at least, the damage that this season could do to the Scrubs brand is not as important as the short-term boost ABC can get from the reliable if unspectacular Scrubs brand. Fifteen years ago, Scrubs‘ performance would make it a struggling show that the network would only bring back if it pretended to be some other show. But by current standards, its performance is good enough that the network has an interest in pretending it’s still Scrubs, when it really isn’t.