The United Colors of Todd Akin 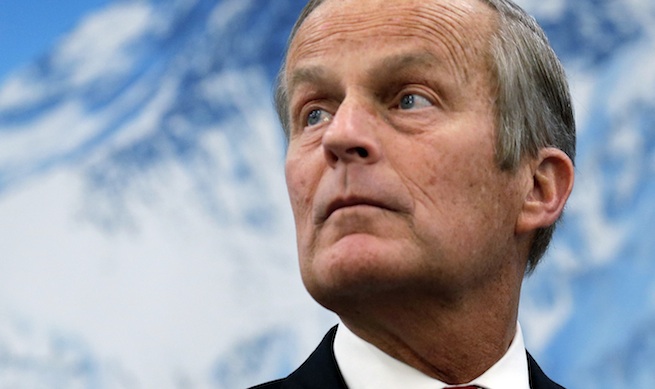 It was hard to imagine at the height of  Todd “legitimate rape” Akin’s mass pillorying, that the Missouri congressman would survive his senate race. The Republican establishment all but abandoned him, Romney asked him to step down, and even Ann Coulter called him a “selfish swine” for his annoyingly strong convictions. What his decision to remain in the race will do for Romney’s chances is unclear, though his name–and now, Richard Mourdock’s— is pretty much synonymous with the dreaded “War on Women.” Akin’s own chances at victory, however, aren’t as damaged by his bogus science as everybody thought they’d be.

“Akin went from a low of 38 per cent support in one poll, conducted in the days after his comments drew national scrutiny, to just a 2-percentage-point deficit in one independent poll released last weekend. One Republican internal poll has Akin and McCaskill tied.”

It’s also rumoured that a number of his old friends (the National Republican Senatorial Committee perhaps?)  are slithering back just in time for the election, with some last minute millions. And the Missouri Republican Party recently helped him out with a $300,000+ ad buy:

See below, one of the weirdest campaign ads ever made (though not as weird as this one) in which a multicultural/multi-generational group of women gush about how much they love Todd Akin, and one of them, about how much grocery shopping sucks in communist Russia…

The United Colors of Todd Akin

If Akin does manage to win the race, the joke is on the Democrats: In August, the Washington Post argued that the Democratic party was instrumental in Akin’s Senate GOP Primary victory. The Dems assumed his opinions were so out there, that were he to win the primary, incumbent Democrat Claire McCaskill would be a practical shoe-in for the Senate. So according to the Post, the Dems “spent $1.5 million trying to help Akin win his 3-way primary.” In other words, they created their own political version of the Producers. Apparently, they ran anti-Akin ads like the one described below, that deliberately made the candidate more appealing to conservative voters, and more likely to win the GOP primary in Missouri.  From the Post:

“‘Todd Akin calls himself the true conservative, but is he too conservative?’ asks the narrator of the ad, which is approved by McCaskill’s campaign and paid for by the DSCC. The narrator goes on to note the negative posture Akin has taken toward President Obama, before concluding, ‘it’s no surprise Todd has been endorsed by the most conservative leaders in our country – Michele Bachmann and Mike Huckabee.'”

That’s not a mild attack ad. That’s a full on endorsement for Akin, which means that if he does in fact beat McCaskill next week, he’ll have some thanking to do across the aisle. And Planned Parenthood will at least in part have its own party to thank for the impending “War on Women”