The Year of the Mall Cop 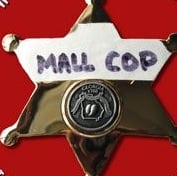 Days after Paul Blart: Mall Cop demonstrates that we still can’t get enough of the “Funny name, wacky job” formula, Fox announces that one of their new comedy pilots is Walorsky, the story of… a fat, lazy guy working as a mall cop. The pilot must have been pitched to them and written before Paul Blart came out, so the question is, does the simultaneous development of two mall-cop-related projects indicate:

a) Nostalgia for the endangered world of multi-story shopping malls;

b) Budget-cutting consciousness that setting most of the story in a mall cuts down on the number of locations you have to scout, or

c) Belief that “mall cop” just sounds funny? (And, unlike “Male Gigolo,” it’s not a redundancy.)

The other news out of Fox’s recent batch of pilot announcements is that while (like all networks) they’re trying to increase their quota of half-hour comedies, Fox president Kevin Reilly claims that the network needs to move away from multi-camera shows — after flops like Back to You and Do Not Disturb — and back to the broad, cartoony, quirky single-camera comedies that gave the network its comedy identity in the early part of this decade. It’s not a bad strategy considering that Fox has traditionally been most successful with comedies when they do whatever the other networks aren’t doing (giving us Married… With Children at the height of the Cosby boom; giving us Malcolm in the Middle when everyone else was trying to come up with the next Friends).