They Are Two Mild and Lazy Guys!

And you Oscar hosts are . . . Steve Martin and Alec Baldwin 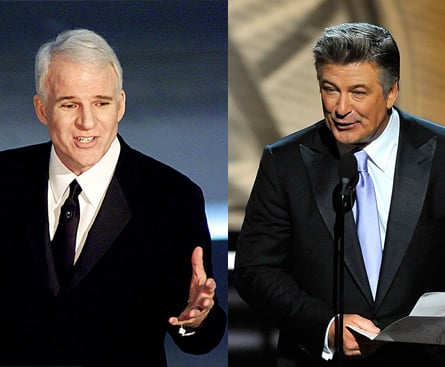 The Oscars really are on a retro kick. First they reinstate the old practice of having 10 Best Picture nominees, and now they’re going to have more than one host for the first time in years. If the team of Steve Martin and Alec Baldwin works out well for them, who knows? We might see them go back to having three or more hosts like they’ve had some years. The last time they didn’t use one single host was 1987, when the show was hosted by Goldie Hawn, Chevy Chase, and Paul “Crocodile Dundee” Hogan. It was a different time.

Part of the theory behind this is that one person who might not be strong enough to carry the show as a host might do well when teamed up with someone else. Martin did all right as a solo host, but even then he had exhausted much of his cool cred, and now he is solidly established as a star of terrible movies. He seems to be most effective when paired up with someone good, and Baldwin is certainly good; also, being on 30 Rock, Baldwin may be a bigger name than Martin for a younger audience.