They should replace Charlie Sheen with Randy Quaid

Okay, so here’s a brief run-down on what happened with the very run-down Charlie Sheen today:

– In an interview with crazy radio host Alex Jones, the crazy actor said crazy things, but for the first time, ripped into the show’s creator, Chuck Lorre, calling him by his original Jewish name as an apparent slur (“Chaim Levine” — one wonders what Sheen would think when people use his real name to imply that his ethnicity is something to be ashamed of) and calling him a “charlatan.”

– Reached by TMZ and given an opportunity to clarify his statement about his boss, Sheen doubled or maybe tripled down, saying “I violently hate Chaim Levine” and going on a rant that ended with him saying “you can tell [Chuck Lorre] one thing: I own him.”

– CBS and Warner Brothers had been planning to re-start production on Two and a Half Men on Monday, albeit in a very precarious way. (There were reports that they were planning to do the show without an audience because they can’t depend on Sheen to work for an entire evening in front of hundreds of outsiders.) Shortly after the second TMZ interview, they announced that the show would be shutting down production for the rest of the season, with only 16 episodes filmed and no more in the can.

– Sheen responds to the shutdown with an open letter calling Lorre a “contaminated little maggot [who] can’t handle my power and can’t handle the truth.” 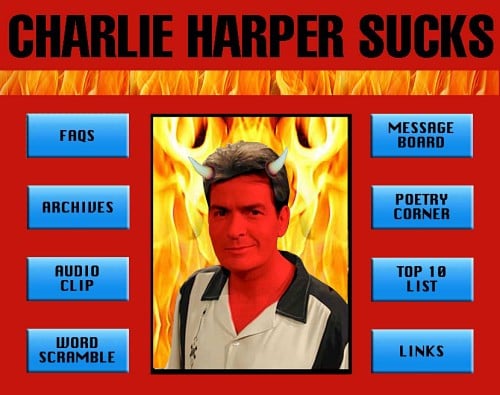 To the extent that you can make any sense out of Sheen’s rage against his boss (who defended him pretty consistently until recently when the show’s ability to stay in production was seriously threatened), it seems like he’s enraged at a) The fact that he was forced to go into what is laughingly termed “rehab” and give up a few paychecks this season, and b) The fact that the creator finally used his vanity cards to take a few shots at him.

It does seem like Sheen was almost deliberately trying to provoke something like this. Crazy isn’t the same thing as stupid, and his comments seem calculated to make it impossible for the show to re-start as planned — it’s either him or Lorre, and since he has two other shows that are set for long runs, CBS needs Lorre more than it needs Sheen. That’s why this is turning out differently than Lorre’s Grace Under Fire and Cybill, on both of which the star turned against him and got him fired.

Why Lorre attracts crazy stars is something I’m not even going to try to figure out, except to note the irony: he’s spent years being bitter about his treatment by diva female stars (Roseanne, Cybill, Brett), even writing it into a CSI episode with Katey Sagal as a sitcom star who gets murdered. So he turned to guy-centric shows and now has found out — or should have found out, anyway — that Charlie Sheen is worse than three Cybill Shepherds.

The worrisome thing about CBS’s decision to cancel the season (losing lots of money and depriving the crew of one-third of the money they were counting on) is that it suggests that they’re hoping Sheen will eventually come back. Think about it: if they were just going to get rid of Sheen, they wouldn’t cancel the season, they’d just order the writers to write him out. Which is what they probably should do, at this point. The shutdown may be necessary, since I don’t know the terms of his contract, but I’d much rather see them go on without him; in fact, given how tired the show has become and how bad Sheen looks, the show might be more interesting (for a few episodes anyway) if we saw them write him out and, I don’t know, throw the whole episode to Holland Taylor or Melanie Lynskey or Conchata Farrell or the many excellent under-used actors they have on hand.

That may be, as I say, impossible, or maybe it would have the potential to hurt their bottom line more than it helps. (If they do five more episodes without Sheen and the ratings tank, it makes it harder to bring it back next year with or without him.) And let’s not forget Jay Leno: some people have iron-clad contracts that make them impossible to fire no matter how much the network would like to.

Could they replace him? Sure. It’s been done. Everything seems to circle back to Miller-Boyett eventually, but remember Valerie Harper? If Tom and Bob were still at Warner Brothers they’d already have replaced Charlie with Sandy Duncan and brought in three adorable moppets now that the kid is grown up. And if there ever was a sitcom character who could plausibly be killed off between episodes, it’s Charlie Harper. I mean “he’ll be dead soon” is an actual line from the show.

Suggested Sheen replacements are already becoming a fun pastime. One of my favourite suggestions, albeit impractical, is to have Michael J. Fox replace him. As a more practical suggestion, I’d stump for that other Spin City guy Alan Ruck, who is a terrific actor (seen him on Justified?) and hasn’t done enough sitcom work lately. But this is all just fantasy at the moment; nobody knows what the network and producers are going to do. Neither do they. That’s why they’ve shut down.

This comes after a Monday when a Two and a Half Men repeat — I said a repeat, not a new episode — was the most-watched program on a night when everything else was new. Charlie Sheen in reruns beats everything else in first-run; that’s how phenomenally popular his show continues to be. And since he pretty much is the show, you can see why panic has set in. The network was counting on this to be its flagship comedy for a few more years; that’s why they felt confident enough to move Big Bang Theory to another night. Now unless they can somehow get him back to work, which is looking less and less likely, it’ll never be that popular again. If, say, Mark Harmon gets tired of his job and decides to pack it in after another year or two, the network will be exposed as being where NBC was in the late ’90s, superficially strong but overly dependent on a few aging hits.

On the other hand, it’s possible to re-group and re-tool if you have a character to elevate to stardom. (That’s why Happy Days‘ ratings actually went up after Ron Howard left; the producers put extra emphasis on the inexplicably but genuinely popular Scott Baio.) Men has done a really poor job with its supporting characters, though; nobody gets used enough except Sheen and Cryer. Even if they wanted to, say, beef up Holland Taylor’s part and make her the lovable sociopath, they haven’t really done enough with her to make that work. A show that bothers to develop its “bench” will be in better shape than a show that piles almost all the material onto the stars, the way Men did. The Office is going to have huge problems without Carell, but apart from the fact that Carell gave them ample time to plan, they are essentially an ensemble show and can (and will) ask their regular cast to carry more of the load without much trouble.

Speaking of stars being hastily written out, here’s a clip from the Frasier episode which was quickly rewritten with Niles — as in, Frasier’s story was literally given to Niles, with the excuse that Niles was filling in on Frasier’s show — when Kelsey Grammer was in rehab. (After Grammer came back he filmed a few segments for the episode so he wouldn’t be left out altogether.) Jon Cryer could handle that, but I’m not sure the viewing audience could.