Today in Alberta: Rachel Notley will be sworn in as premier 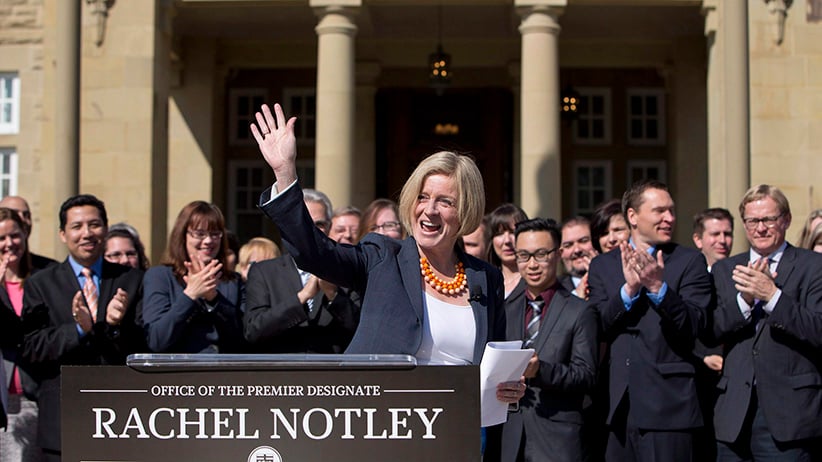 EDMONTON — New Democrat Rachel Notley becomes Alberta premier today when she and her cabinet are sworn in on the grounds of the legislature in Edmonton.

It will also be the official end of the 44-year Progressive Conservative dynasty.

Notley has promised a family-friendly affair instead of the usually staid ceremony at Government House. She has said her cabinet will have 12 ministers, including herself, and will get to work quickly — the legislature is to resume June 11 to choose a Speaker and a throne speech is planned four days later.

That is to be followed by the introduction of several bills before the house rises for the summer. The New Democrats aren’t planning to table a full budget until the fall. The NDP ousted the Tories from power by winning a 54-seat majority in the May 5 election. Notley said last week that it’s important to take time to make sure the budget is done right.

“There will be a great deal of work done (on the budget) over the summer,” she said Wednesday.

Besides Notley, there are three experienced NDP members returning to the legislature and they are almost certain to be named to senior positions. Notley has already appointed former party leader Brian Mason house leader.

What you need to know about Rachel Notley

The rest of her caucus consists of rookies. The youngest is 20; the oldest 68.

Notley is down one member since the election. She suspended Deborah Drever from Calgary Bow on Friday over controversial photos. Drever is to sit as an Independent.

The cabinet’s inaugural meeting is to be this week in Calgary.