Tonight Was Melrose Night And The Excitement Was Palpable 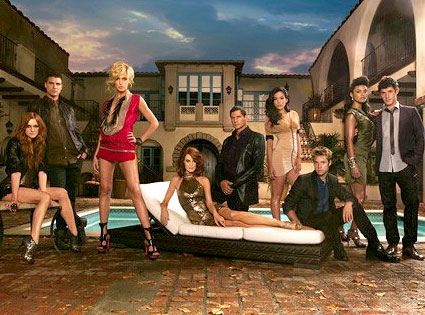 Tonight was the premiere of the new Melrose Place, and I’ll be interested to hear what the reactions are. I had a negative reaction to the pilot, finding that it wasn’t fun enough to make the trashiness work, and that the most loathsome characters were the relatively “nice” ones. (In particular, the filmmaker-wannabe who won’t grow up and his wonderful girlfriend. They say cute things and watch cute videos and they’re just a horrible example of what Hollywood thinks of as a cute couple. The only time I had any affection for the guy at all was when it looked like he might take up a career in blackmail.) I guess other people were more favourably disposed to it. But as for me, what I said a few months ago still sums up my view of this pilot.

One additional thing I will say about the pilot is that I think that, like most attempts to create a new prime-time soap, it doesn’t quite grasp the difference between a prime-time soap and a regular prime-time serial. Networks keep trying to revive the elements of the Dynasty, Dallas, Melrose Place type of soap, with their backstabbing, shifting alliances, and divisions between characters who are good (but corruptible) and bad (but not so different from the good ones in what they want and what they’re willing to do). But they seem to treat these subjects to the type of structure, pacing and cutting that is common to most serialized shows, even the higher-class ones.

And while serialized non-soaps have a lot of roots in soap opera, they’re not exactly the same thing. A serialized drama is a show that traces people through a big over-arching story arc. It’s meant to convey the feeling that this is all part of one story and it’s building up to some kind of conclusion. A soap opera is the storytelling equivalent of a perpetual motion machine. It is not supposed to build up to a conclusion, or even suggest the possibility of a conclusion, and its characters are not usually supposed to grow or change except in highly melodramatic, spectacular ways. Its purpose is to engineer excuses for characters to come into conflict, threaten each other, be betrayed by each other, or sleep with each other (sometimes all at once), and so it proceeds on a scene-by-scene basis. Each scene provides a (hopefully) satisfying confrontation and also leaves us with something that points the way forward to another conflict/confrontation to come. Lost and Friday Night Lights have soap elements, but they also have stories to tell, and the soapy moments are (hopefully) at the service of the story. On a soap opera, the story is a mechanism for delivering big confrontation set pieces.

The techniques used on the new Melrose Place seem to be those of the serial drama, including the CW’s own shows like Gossip Girl — especially the use of short scenes and other devices meant to get a lot of storytelling done in a short time. Quite apart from time limitations, short scenes keep the story moving forward and create a sense of speed and momentum. Which is fine, if the story is the most important thing. But on a trashy/fun soap like Melrose is trying to be, the stories are intentionally silly and don’t need to be moved forward quite so much. What’s really important are the angry, name-calling, threat-filled conversations, which almost seemed to be tossed off as afterthoughts. It looked to me like there was an attempt to keep the really cheesy stuff offscreen, or at least dilute its impact in some way (like by putting it in a fuzzy-looking flashback).

The original Melrose had one thing going for it  in comparison to the new version: it really felt like a soap opera. Even the flat lighting and static camerawork helped there, but what helped most of all was the leisurely pace; it would slow down and linger over the big moments of screaming, sell-outery and Locklearian evil. No music, no flashy cutting, just medium close shots of people realizing they’d been betrayed and Locklear trying not to gloat too obviously about her successful betrayals. That’s what soap opera is all about, the big melodramatic scenes; they are to the soap as the car chase is to the action-adventure show. And the new prime-time soaps sometimes seem to be like action shows that cut away from the car chases too early.

A better visual/pacing guide for today’s prime-time soaps might be something like, believe it or not, Mad Men — not a soap opera, but Melrose needs that kind of slower pace and willingness to take its time over dialogue scenes. The dialogue scenes are the key moments of any soap; try to overwhelm them with flash and speed and there’s not much payoff.