I want to thank regular Inkless readers for their forbearance as I cough up a medium-ambitious article for our print edition. Blogging today was light and blogging tomorrow will probably not be copious. I do, however, want to pass this along. 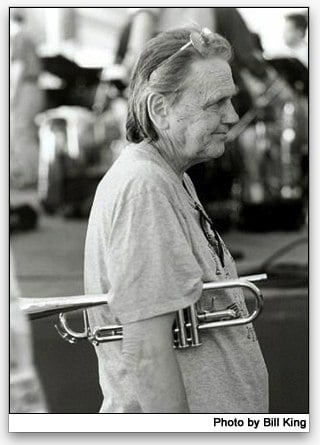 This email arrived over the weekend from Phil Dwyer on Vancouver Island:

“I’m wondering if you heard about Arnie Chycoski. I guess you have been busy (duh) so maybe not, but he passed away on Wednesday morning. … It’s a huge loss in terms of his influence and level of respect in the community and many of the musicians I know are hit hard by his death on a few different levels.”

To a non-musician, a jazz big band can look pretty much like an undifferentiated mass, a three-tiered layer cake of brass and wind. But in fact a good big band’s horns are highly specialized, never more so than in the case of the lead trumpeter. His job is to put the top note on sometimes impossibly tall chords, to reliably deliver notes far higher than the horn was frankly designed to produce, to give a band much of its cut and urgency. It is an unbelievably delicate business. The distance between the right note and an exposed mistake is measured, where mouthpiece meets lips, in fractions of a millimetre. Very few have ever been better at it than Arnie Chycoski.

In the early 1980s, when Rob McConnell took his Boss Brass big band out of Toronto’s jingle-and-soundtrack studios and started gigging around town, and then across North America, as a showcase for Rob’s brilliant jazz arrangements, three things were immediately clear about his trumpet line. In Sam Noto he had one of the finest bebop soloists anywhere. In Guido Basso he had a debonair balladeer beyond peer. And in Arnie Chycoski he had the most ferocious lead trumpeter among mortals (Maynard Ferguson is thereby exempted). If you go back and listen to those infernally complex yet unfailingly good-natured McConnell arrangements on album after album, you hear how important Chycoski’s high-note work was in defining the sound of the band.

The comparison to Ferguson, while unavoidable, is highly misleading because there was none of Ferguson’s penchant for lovable showboating in Chycoski. He was simply a professional: quiet, gentle, unfailingly generous with younger colleagues, fearsomely consistent in his performances. He was content to stay at the back of the band and, every once in a while, slam out three or four notes that would make everyone’s jaw drop.

The last note of a Boss Brass tune was often a short note at the end of a fast ascending run. When everyone else in the band chopped the note off quickly, Chycoski would let his linger just a little longer, way up over everyone else, near dog-whistle frequency, as if to say yes, you really did hear it. His colleagues called that extra-long top note the “Toronto quarter note.” Lesser lead players in other bands learned to imitate it. So if you spent much time listening to the Boss Brass, you got used to having the sound of Chycoski lingering after the tune was done, which is a pretty good metaphor for the way the memory of him lingers now that he is gone.

Born in Vancouver, a Toronto resident for decades, Arnold Orest Chycoski retired to Victoria and died last Wednesday at Providence St. Peter Hospital in Olympia, Washington. He was 72.