Toronto: Too big for the Grey Cup? 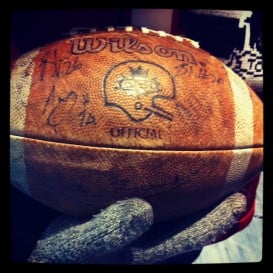 Yesterday at noon, I walked into a Boston Pizza in downtown Toronto, in the middle of the Grey Cup street festival. Everyone was watching American college football.  One guy yelled at the TV repeatedly. At Ohio state players: “that’s how we do it.” At Michigan players: “Take it b-tch.”

I sat down at the bar next to a man named Greg Weston, a Torontonian who grew up in Kingston. He was wearing a Saskatchewan Roughriders hat. When he was eleven or twelve, he says, his family had a very important house guest. “There used to be a program where families would take players in [on the road], and we hosted a player for a few days,” he says. “Walter Bender. Played for the [Hamilton]  Tiger Cats, then was traded to the Rough Riders.” Weston and Bender hung out and ate dinner together every night.

He’s been a Roughriders fan ever since.

And he thinks there’s a specific reason–besides the fact that there were no CFL games on TV that day– why the Canadians in Boston Pizza were a lot more excited about an American college football game on TV than the big-league Canadian one coming up.

“Toronto, we’re a bunch of wannabees,” he says. “We like American football better. I have to say I am not the biggest CFL fan. I’m a die hard NFL fan. We go for what’s bigger and better and when the [Buffalo] Bills come to town we get excited about that. Let’s face it. A lot of people here for the Grey Cup are Stampeders fans.”

He has a point. If you’re in Toronto and you’re not within a three block radius of the Roger’s Centre and you’re not a CFL fan, you might not even know what the Grey Cup is, let alone that it’s taking place in your city.  Hockey fan or not, it’s impossible to avoid the Leafs (no matter how much they stink.) Avoiding the Argos is almost effortless.

Steve Sommerfeld is probably as big a Calgary Stampeders fan as they come. He was also in Boston Pizza that day, in full Stamps regalia (jersey and cowboy hat) drinking a pint; though he wasn’t paying much attention to the college game on TV.  “I went to the mall yesterday  dressed like this,” says Sommerfeld, “and the guy [at the store counter] says ‘what are you in town for?’ And I say ‘a football game’ and he didn’t know.”

Sommerfeld and his friends say they love Toronto, but acknowledge that other, smaller, cities are probably better suited to host the Grey Cup. And they’d know, as they’ve upheld the same tradition for the past seven years: going to the Cup together and always taking with them, a “lucky football” signed by the entire 2004/05 Stampeders roster. I followed the group of guys–three out of four of whom were in full Stamps gear–out of Boston pizza, where they passed their lucky football back and forth all the way down Front Street, into another bar (also showing American college football.) I don’t really remember what happened next…

This was one of the only quotes I could make out my tape recorder the next morning:

“Nobody worries about pipelines from B.C. We just party.”

On my way here (I am currently at the Grey Cup, in the Roger’s Centre Press box) a lone TTC employee kept yelling “Argos” on my subway car. The refrain? “Shut up.”

Things are different here. We (the Argos) are winning, everybody’s happy (save my Stampeders friends) and if the next two quarters are anything like the first ones, this city will know victory for the first time in forever.

If they’re paying attention that is…