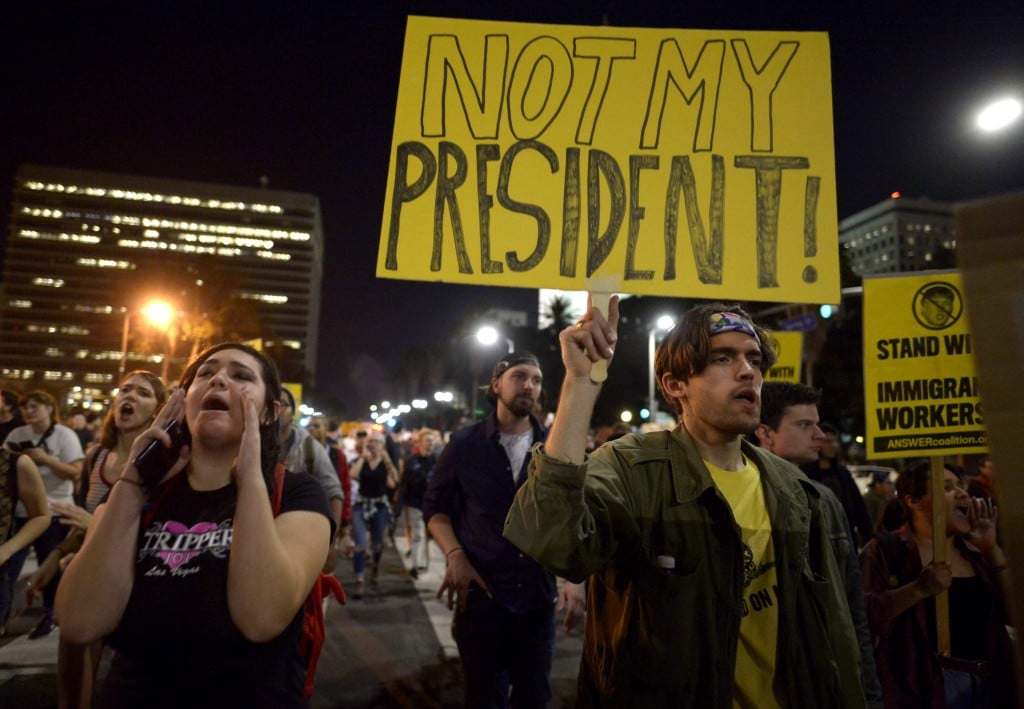 Nov. 11, 2016: Donald Trump lists his transition team, which reads as much like an exercise in loyalty as it does in aptitude. Meanwhile, the protests don’t stop—though Trump changed his tune on Twitter to address them.

Here’s our daily Trump Bulldog, rounding up what you need to know about what happened on this day as President-elect Donald Trump prepares for the White House, and vice versa.

Now that the meetings with President Barack Obama and Speaker of the House Paul Ryan are behind him, Trump announced his transition team.

New Jersey governor Chris Christie is out as the chairman of the team in favour of vice-president elect Mike Pence. Christie, reeling from the aftermath of the Bridgegate scandal, will still be part of the executive committee alongside former House Speaker Newt Gingrich, former New York City Mayor Rudy Giuliani, neurosurgeon Ben Carson (who unsuccessfully ran for the Republican nomination), retired Lt. Gen. Michael Flynn and Alabama Sen. Jeff Sessions, who has long been in favour of cracking down on immigration.

Other notable names involved in Trump’s transition team include his children, his son-in-law (and close confidant throughout the campaign) Jared Kushner, Breitbart chairman turned Trump’s campaign chairman Steve Bannon, Republican National Committee Chairman Reince Priebus, Florida attorney general Pam Bondi (who infamously didn’t pursue an investigation into Trump University around the same time Trump himself made a $25,000 donation to her re-election campaign) and PayPal co-founder Peter Thiel (who was the first openly gay person to speak at the Republican National Convention, and also bankrolled Hulk Hogan’s lawsuit against Gawker than eventually bankrupted the media organization.)

A passion for protesters

Anti-Trump protests continued for a third night across America, including reports of violence breaking out in Portland, Oregon.

On Thursday, Trump quickly blamed the media for inciting the action of “professional protesters”…

Just had a very open and successful presidential election. Now professional protesters, incited by the media, are protesting. Very unfair!

… before changing his tune in another tweet Friday morning.

Love the fact that the small groups of protesters last night have passion for our great country. We will all come together and be proud!

Meanwhile, in a local radio interview, Oregon senator Jeff Merkley offered this advice for the president to deal with the protests: “He needs to get rid of his cell phone and quit tweeting stupid things.”

None of the above

Sure, Trump won the presidency and Clinton won the popular vote, but the real winner of the 2016 election was apathy. A total of 126 million votes were counted, which means 55 per cent of voting aged Americans cast a ballot this year, a 20-year low for U.S. elections.

Compare that to 64 per cent who showed up in 2008 when Barack Obama defeated John McCain.

So while there will be no shortage of people loudly criticizing the new president-elect, perhaps not enough of them heeded President Obama’s prior advice: “Don’t boo. Vote.”

The pollsters got this election spectacularly wrong—even wunderkind Nate Silver from FiveThirtyEight.com—but one professional prognosticator who got this election right (and has been right ever time since 1984) is American University professor Allan Lichtman.

He made his prediction less on polls, but more on his “13 keys” which ranks true/false questions like if a candidate has charisma, if there is social unrest, or if the economy is in a recession. And now that he’s right yet again, this time about Trump winning, he has a new prediction for the president-elect: he’ll be impeached.

“They [Republicans] don’t want Trump as president, because they can’t control him. He’s unpredictable,” Lichtman told the Washington Post. “They’d love to have Pence—an absolutely down-the-line, conservative, controllable Republican. And I’m quite certain Trump will give someone grounds for impeachment, either by doing something that endangers national security or because it helps his pocketbook.”

What formula does Lichtman have for this prediction? This time, there are no keys. “It’s just my gut.”

An ask from WIkiLeaks to Obama

WikiLeaks played no small part in helping Trump get elected. With access to stolen emails after a Clinton’s aide email was hacked, the organization had a daily leak of Democratic insider chit-chat meant to undermine the Clinton candidacy.

But now that Clinton has lost, WikiLeaks is essentially asking for a favour from Barack Obama: pardon Edward Snowden and Chelsea Manning, two prominent whistleblowers who are either living in exile (Snowden) or serving a 35-year prison sentence (Manning).

President Obama has a political moment to pardon Manning & Snowden. If not, he hands a Trump presidency the freedom to take his prize.

Obama has already granted 760 commutations this year alone, but pardoning these two would make by far the biggest headlines.