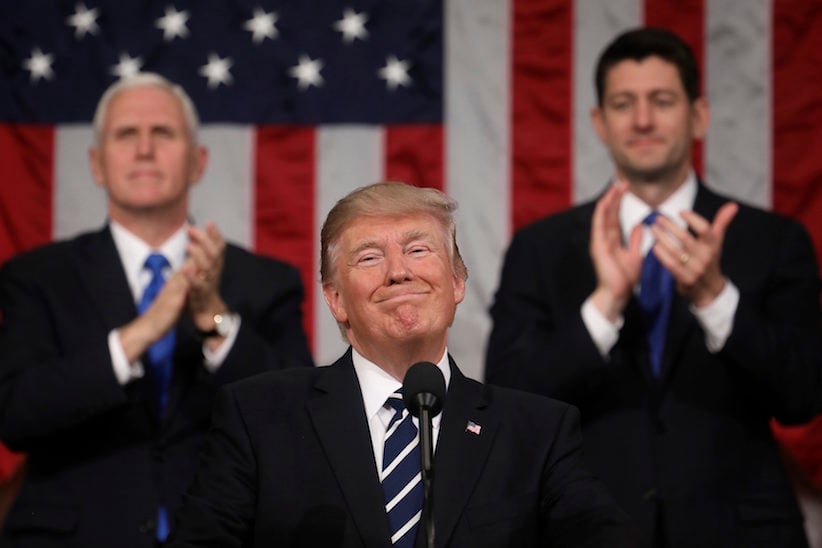 Trump’s disciplined and optimistic tone was what GOP lawmakers wanted to hear after a rocky first month that provoked daily anxiety on Capitol Hill with every new presidential tweet. Republicans welcomed Trump’s presentation and his call for “a new chapter of American greatness.”

“It’s just one speech, but I think what we see is a guy who comes from outside the political process now weaving his way through into becoming an effective leader,” said Sen. David Perdue, R-Ga.

Vice-President Mike Pence said on MSNBC Wednesday morning that Trump showed Congress and the nation his “broad shoulders, big heart, reaching out, focusing on the future.”

MORE: At Trump’s speech to Congress, an audacious call for hope

Yet even though Trump offered some specifics on health care and appeared to embrace a key element of a leadership-backed plan emerging in the House, his comments did little to settle an extremely difficult debate over Republicans’ top legislative priority.

Indeed, a day after the president called for “unity and strength,” Republicans looked as divided as ever as they try to make good on seven years of promises to repeal and replace former President Barack Obama’s health care law. Most said Trump’s speech hadn’t changed that or brought them much closer together.

“I don’t know that that was his intent,” said Sen. Bob Corker, R-Tenn. “But I mean he gave the kind of guidelines that I think most presidents give on issues like this and it’s up to us.”

As Republicans cheered and Democrats sat silently Tuesday night, Trump declared: “We should help Americans purchase their own coverage, through the use of tax credits and expanded health savings accounts — but it must be the plan they want, not the plan forced on them by the government.” Those were comments House GOP leaders interpreted as an embrace of their plan to replace the Affordable Care Act with a new system built around refundable tax credits.

But conservatives who’ve been rebelling against that plan, denouncing the credits as a costly new entitlement, disagreed. And they showed no sign of backing down.

GOP Sen. Ted Cruz of Texas, who has joined Sens. Mike Lee of Utah and Rand Paul of Kentucky in declaring their opposition to the legislation emerging in the House, accused the media of “bending over backwards” to interpret Trump’s remark as a specific legislative proposal. Cruz insisted that Congress should begin by passing legislation that simply repeals Obamacare like a bill Obama vetoed in early 2016.

“That should be on the (Senate) floor. And from there we should build up, and we should focus on areas of consensus,” Cruz said. “We should not focus on ideas that divide us and pull us apart.”

The stance adopted by Cruz, Lee and Paul provoked familiar backbiting from other Republican senators who fear that the rebels could block action given the GOP has few votes to spare with a slim 52-48 majority in the Senate.

“We do have some problems with two or three people on our side that make it so if this becomes a partisan vote we won’t have the votes,” said Sen. Orrin Hatch, R-Utah. “So yeah, it’s a problem, it’s a big problem.”

Amid the divisions Trump was lunching with top House and Senate GOP leaders, and Senate Majority Leader Mitch McConnell, R-Ky., summoned GOP senators to meet later Wednesday with key House leaders on the health care effort. It was unclear what would emerge but the sparring was certain to continue.

Trump’s comments on another massive legislative priority, overhauling the loophole-ridden tax code, also did not appear to move the needle. A vague overture on immigration was welcomed by some, yet with no details provided its future was cloudy. The president repeated his call for a $1 trillion infrastructure bill, but that could provoke a confrontation with deficit hawks and is on the back burner on Capitol Hill anyway given the enormous legislative lifts on health care and taxes that loom first.

And Trump’s failure to say anything about Medicare and Social Security, the massive entitlements that are eating up the budget, left some Republicans complaining that he was ducking political reality.

“The president has a saying, ‘All talk, no action.’ His budget is all talk and no action when it comes to long-term indebtedness,” Sen. Lindsey Graham, R-S.C., told reporters Wednesday.