The first season of Designing Women is coming out on DVD next Tuesday. To promote the DVD release, the show’s creator, Linda Bloodworth-Thomason, who wrote most of the episodes, gave interviews to journalists… and also to me. Here are some excerpts: 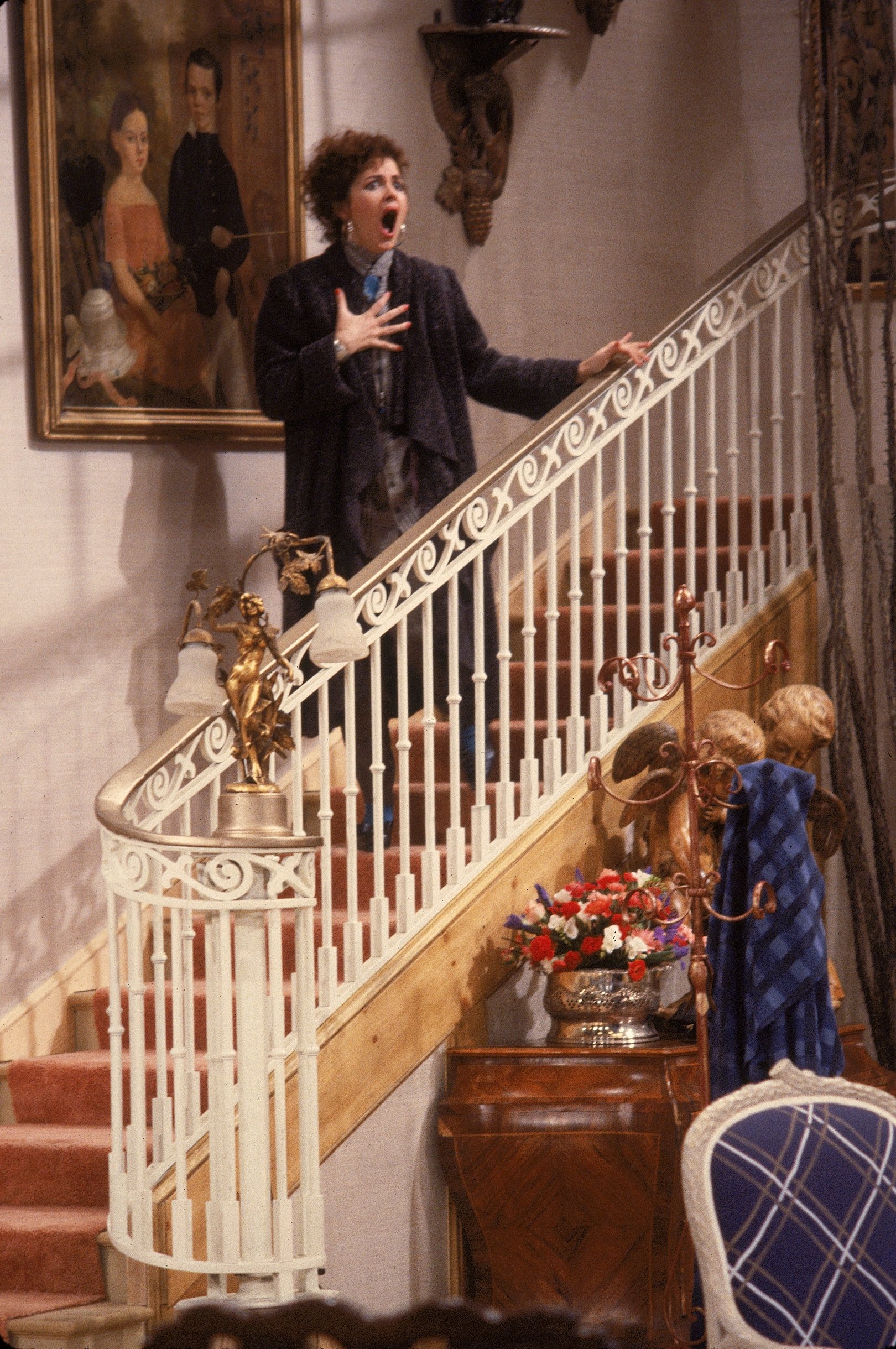 Q. Why was there such a delay in releasing the show on DVD? I’d heard it was about music rights, but I didn’t hear much music on the DVDs, except “Georgia On My Mind” [the theme song].
A. A lot of it [the music] is out now. That’s what we did. We removed a lot of the music. I’m just a music freak. Very few producers or writers bothered to buy music for their shows, and I bought pop songs all the way through for five years. It was very expensive, but I was spoiled by Jeff Sagansky at CBS; he just allowed that. I learned a good lesson, because it held up the DVD for years. Anyway, it’s out now, and it’s pretty much music-less, except for the score. In a way I think it [the delay] worked out for the best. I think there’s such a lack of strong, big-shouldered women in comedy that it’s worked to our benefit. I’m glad it’s coming out now, because I think it’s going to sell even better; I hear more people saying that they miss the loud-mouthed women like Roseanne and Candace and Bea, and all the women who paved the way. We don’t have many of them now.

Q. You came on not long after The Golden Girls…
A. I thought they went off before we went on. I don’t think we were ever on at the same time.
Q. No, Golden Girls started in 1985.
A. Are you serious? This is shocking. I had no idea. I thought Golden Girls was like 1980. You’re very informative.
Q. Was the network looking for something like The Golden Girls?
A. No. They hired me to do something else. I was going to do a pilot about a man, and one day I got in my car and I said “I can’t write this.” So they said “What do you want to write?” And I said: “I just want to write some Southern women who aren’t like the usual Southern women you see on television, and I want to have some beautiful, sexy feminists who are man-loving.” I thought feminism had been so vilified; you were a man-hater if you were a feminist. So I thought, I’m going to make these women beautiful, sexy and desirable, but they’re going to be feminists. That was the point of Designing Women. [And] to put it frankly, I wanted to show smart hicks. I felt that the American television scene had been only informed by Jed Clampett and The Dukes of Hazzard. I didn’t like that; that didn’t jive with where I came from, and my family. I wanted to show another side of that, and I think these women did that pretty well.

Q. Were there any cast members you had in mind from the beginning?
A. All of them. I knew Dixie and Delta from a show I did called Filthy Rich. They were brought to me by a wonderful casting director named Fran Bascomb; I fell in love with them and I said “We’ll do another show together.” Amy Annie and Jean had been on some dramatic show together, and we thought, if we get these four together, we’ll really have something.

Q. In the enclosed booklet, you talk about the production designer [John Beckman, a veteran production designer who had done many big Warner Brothers movies in the ‘50s] and the importance of the set. What made the set different from other sitcoms?
A. It seemed to me that a lot of sitcoms, when I was growing up and after I became a writer, all had the same look. It didn’t look very rich; it’s kind of tinny and anemic and unmemorable — not everything, but most things. I wanted something really grand. I guess we wanted to be pretentious. And here comes this 90 year-old guy, John Beckman, a national treasure. With the ageism factor in Hollywood, they tried to discourage me. They said “You wouldn’t want to meet this man; he’s too old.” Well, of course, I had to meet him, and he was everything I thought he would be. The set just looks like a place where there’s going to be some grand women: the staircase, the little atrium in the back. It’s big, it’s wide, it’s open, it’s very Broadway-esque. I had never given that [set design] any thought at all. I thought the only thing that matters is the acting and the words. But John Beckman really taught me something there. I think that set became a little bit iconic.

Q. You also mention in your booklet essay that you didn’t get many notes from the network. I get the impression that there were more shows in the late ‘80s than today where the networks didn’t give a lot of notes. Was there any reason why you didn’t get a lot of interference?
A. TV is a very corporate environment today. Back then it was more about individual personalities. You have to find somebody who emerges as a really strong figure who’s going to back you, and that doesn’t happen very often any more. I don’t know if it ever happens. For me it was Jeff Sagansky and Howard Stringer. I don’t think I could ever find that again. The day I found Designing Women was going on the air was the day my mom was diagnosed with AIDS. She died just as it premiered. And I was never a script ahead in the entire series. I was flying by the seat of my pants, writing most of the scripts on the weekends. They never knew what I was writing, because I didn’t know what I was writing. And they never questioned me. We did the Clarence Thomas hearings, women in the ministry, domestic violence, date rape, blah blah blah, never a word. They just said “you go,” and they loved the excitement. It was almost like live television. It was exhilarating. I don’t think that could ever happen again. Now you have nine people from the network following you around with little furrowed brows, and they all have note pads, and they all have suggestions, like “maybe this person should have a dog.” They just got out of college; they don’t know anything yet, and they’re supervising people who have been writing for twenty-five years. It’s silly. But these guys [Sagansky and Stringer], they picked who they wanted to work with and they said go.

Q. Are there any episodes from this collection that you particularly like?
A. I do like the Beauty Contest… is that the name of it? It’s the first sort of “Terminator speech,” where Julia tells off a beauty contestant. That was the first speech where you knew who Dixie’s character was going to be. The first year was like the Wild West; we were given so much freedom, and we were wild at heart, and we ran with our hair on fire. It was fun. There’s not an episode I don’t love in the first year.

Q. About the cast issues…
A. The Delta thing? Delta and I are still very good friends. Dixie and I are also. Delta has more than apologized for that period of our lives together. I think everybody involved could have acted better, but she was the only one who had a doctor’s excuse. As she said, she was crazy. It was hard, because you couldn’t really say what was going on. But there was never a weight issue, from our standpoint; I never cared what she weighed, I told her that constantly. But it was something in her, and she didn’t believe it. And I think I learned a lot. We were all a lot younger, and we could have talked more instead of getting on the wrong side of each other. But it all worked out okay; we love each other and we’ve done three shows together now.

[On the addition of Meshach Taylor, mid-way through the first season, as their only male regular]:
He came in as a guest, and he was great. And we thought, wouldn’t it be great, with all the racial tension involved in Southern shows — and the race factor is always a high-decibel factor in the South — wouldn’t it be great to throw a black man into the mix? I got a lot of angry mail about him being an ex-convict. I had taught school in Watts for a couple of years, and I knew a lot of my children’s fathers were in jail. It didn’t mean they were bad people. But he evolved into an owner of the business, and he and Suzanne were golden together, because she was a racist, and it showed how someone could be a racist and still work her way to a relationship with a black person that actually had love in it. I thought that was interesting, and they did that more through the acting than the writing.

[On filming next door to Seinfeld at Columbia/Sony]:
Seinfeld was our next-door neighbour; they had the office next to us. We got to be friends with them, but they would come over to us, totally puzzled. They would go “what was that about?” And “why would you put red sauce on meat?” They didn’t get the whole thing. Actually, the writers from Seinfeld are the only people who ever told me they didn’t get it. But I’m kind of flattered by that, because if they had gotten it, I wouldn’t have been doing it right.