What you should and shouldn't watch tonight 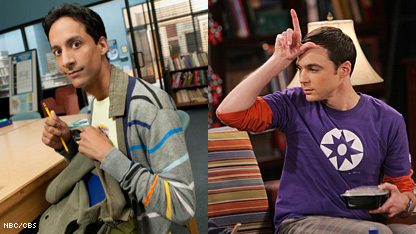 And now comes one of the bigger nights of this wild premiere season — though another night that probably won’t produce a breakout hit. Except for Lone Star (where the network had to make a special announcement that they’d be showing a second episode) and last night’s The Whole Truth, there have been no out-and-out flops among the new shows. But there haven’t been any out-and-out smash hits either: NBC’s The Event was probably the best performer relative to its time slot, while Hawaii 5-0 and Mike and Molly both did well but not terrific considering their plum time slots. Most of the new shows are like that, doing OK but not great but not terrible either. Which ones stay on and which ones get canceled will depend on how they do in future weeks and what the network has waiting in the wings, plus the network executives’ opinions. (Cougar Town, for example, continues to do very poorly given its time slot, losing a huge chunk of Modern Family‘s audience. But ABC seems to like it, so they might cut loose some other show to keep it on.)

Instead, the big numbers have been posted by returning hits, particularly light n’ fun shows: Two and a Half Men, Modern Family and Glee were all up from last year.

In other ratings tidbits, the season premiere of Being Erica didn’t provide much good news: it was down to only 400,000 on an otherwise good night for the CBC. Since the network didn’t promote its return very much, I’ve heard speculation that this is seen as a possible last hurrah for the show: a chance to wrap things up without much hope of renewal. I guess we’ll see. I personally enjoy the show but have to admit that, because we’d seen her learn her lesson so often, I started to drift away a bit. There’s only so many times a character can learn the same lessons about personal growth.

I said just now that the hour is competitive, but in a sense it isn’t: The Big Bang Theory is likely to win the hour in total viewers and the Coveted Demographic. What makes it interesting is the question of how well it will do — will it get somewhere near what it got after Two and a Half Men, establishing it as a genuine smash hit? Or will some of its viewers prove unwilling to follow it to Thursday, establishing it as a bad night for CBS to try comedy? If the show can do in its new time slot what Glee did its new slot, then it will be a game-changer for its network, which would then move the aging CSI and start a two-hour Thursday comedy block to replace NBC’s. But that’s a huge “if,” which is why everyone’s going to be looking very closely at the numbers.

Then there’s Community. This show is not going to win the night; the question is whether it will hold up enough to get a third season. The quality should be as good as or better than the first season, especially since creator Dan Harmon is a guy who always sounds like he knows what he’s doing and can avoid the traps that sophomore sitcoms fall into. The fact that it’s going up against Big Bang also creates an irresistible story line; it’s not just David vs. Goliath, but a clash of two completely different comedy philosophies. Harmon talks a bit about it in that interview, but it’s almost less vs. more: Community is of the school that wants to pack as many jokes as possible into 21 minutes, while Big Bang is the kind of show that slows everything down: less plot, longer scenes, more leisurely pace (not to mention the pauses for audience laughter). I don’t think either is inherently better, but it’s hard not to see it as a sort of culture clash, particularly since some online commentators — like the author of this massively mistaken post — wrongly think that the more plot a show packs in, the more sophisticated it is.

If you know my love for the multi-camera sitcom style you’ll probably know that I’m rooting for Big Bang Theory to do as well as it possibly can, even as I worry that it’ll probably do somewhat less than the network expects. Any underperformance will be taken by every non-CBS network as an excuse to spend four more years not picking up traditional sitcoms, certain that they’re just about to go out of style. (They never will go out of style, but executives are frequently looking for a reason to claim they will.) At the same time, I can’t root against Community: along with Parks & Recreation it was the highlight of NBC last year, and it’s done just about everything right that most single-camera comedies do wrong: whereas the characters on, say, Modern Family still have nothing very distinctive about them after a year, every character on Community has grown beyond stereotype and developed a different kind of comic chemistry with every other character. So the ideal thing from my point of view would be for Big Bang Theory to do great while Community does what it did last year or a little better. Hope, hope.

Then you have Bones, a survivor. It almost always entertains and almost always manages to do well enough to keep going; it will never be a smash hit, but it doesn’t need to be — a solid, unspectacular but consistent show is almost as rare and valuable as a big hit. (ABC has another one of those solid type shows in the appropriately named The Middle.) Finally, My Generation is sort of Thirtysomething meets Modern Family — a non-adventure drama about people wondering where their lives are going, but shot like a documentary. The show has been pilloried for taking itself, and the problems of its characters, so very seriously, but that’s not always death; it wasn’t death to Thirtysomething, which got similar accusations of being way too dramatic about such insignificant people. But the time slot, the confusing format (which is now almost completely associated with comedy) and the lukewarm reviews may not add up to a great chance for this show.


The first pilot of Shat My Dad Says was terrible. (It included one of my all-time favourite bad exposition lines: “Ever since I moved back here to San Diego…”) The new pilot is not that terrible at all. It doesn’t have many useful jokes — the audience only really comes alive when Shatner gets a meta-joke about himself. And it has really no characters except the dad and his son: there’s another drop-in couple that isn’t funny, and aside from that there are no other regulars. But the actual scenes with the son and the dad, and the son’s resentment over the way his dad treated his mom, could potentially be the basis for some decent stories. Which makes this a “check back in six weeks and see how good or bad it’s become” kind of comedy.

The original version of this post left out 30 Rock, which goes to show you how much cultural currency it has lost. (Well, no, it shows you that my memory is going. But I’ll pretend it’s the show’s fault.) But while I’ve never thought the show was as great as its Emmy dominance would suggest, it’s always produced good jokes: it’s a joke machine, and an efficient one. It has issues with plot and characterization that it never fully worked out, and that finally started to catch up with it last year. So we have to see if this is a comeback season or a season that continues the slippage, but either way there’s bound to be some funny jokes in every episode. The show will probably be beaten in the ratings by Shatner, but low ratings have never mattered to this show, which has the full protection of the network for as long as Fey wants to keep it on.

Four biggies. Since each one is a strong performer in its own way, I don’t even want to speculate on what’s going to win and in which demographic — though it’s a reminder that even now, the prime-time audience is big enough to sustain four shows at once (plus Nikita on the CW) and qualify them all as successes in their own different ways. People will be watching to see if Fringe can build on the promise it showed in its second season (it’s been getting better at amping up the serial “mytharc” format its fans prefer while still turning out episodes that have a genuine idenity of their own).

But The Office is the big question mark, of course: will it rebound after the uncertain steps and aborted arcs in the second half of the last season? And above all, what’s with Michael? The whole season is really about Carell and what they’re going to do when he’s gone. It can’t help but give the show some interest: it’s like a reality show (and The Office was partly inspired by the success of reality shows), waiting to see who’s going to get picked to be the new boss, and what the dynamic will be like when the inevitable happens. The show will surely be weaker after Carell leaves, but if his departure is handled right it could make this particular season unusually gripping — just because no matter what happens, we’ll have that upcoming event in the back of our minds.

Enough people have bashed this pilot, deservedly, so I won’t even go there. Even the showrunner’s interview with Aaron Barnhart, where he tries to defend his show, makes it sound worse than it already does.

Not a lot of excitement there. The Apprentice seems to be past its sell-by date in every way, including popularity. Private Practice continues to keep spinoffs alive, just barely. And The Mentalist — well, I have the same feelings about it that I have for Modern Family in the comedy category. It’s a well-made show in every way, but I don’t personally see much there beyond the craftsmanship.

So 10:00 will instead be the time I turn to The Daily Show on The Comedy Network and try to guess whether this will be one of the nights they get the new Colbert Report at 10:30 (thus justifying their decision to move the shows an hour early) or when it’s not ready in time and they have to show a rerun (thus making us all angry). I know they want to make room for Conan O’Brien at 11, but they really need to find some kind of back-up plan in case Colbert is not consistently available at 10:30.

FILED UNDER: Big Bang Theory community My Generation The Office