With just the first sequel of the 'Twilight' franchise, the novelty is wearing thin 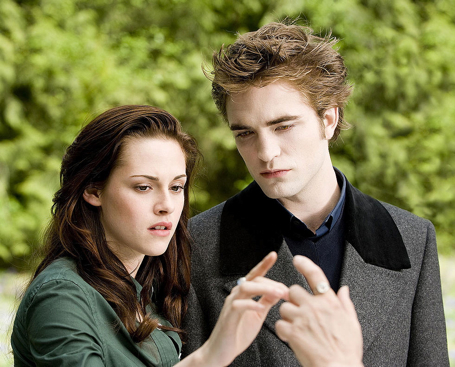 True confession. I’m no teenage girl, but even though I’m totally the wrong demographic,  I liked Twilight—the first movie. I was charmed by the novelty of it, by the fresh-faced vampire family, and by the actors, who were clearly relishing their roles. It was funnier than I’d expected. And there was an intriguing chemistry at its core. For a boy-crazy girl, Kristen Stewart conveyed a cool, self-possessed intelligence, and Robert Pattinson smoldered with the slow burn of a mock James Dean. The film found that elusive sweet spot between earnest romance and comic irony. The special effects were as makeshift and unsophisticated as Catherine Hardwicke’s direction, but somehow the thing worked. Yet despite the movie’s massive success, Hardwicke was summarily dumped from the Twilight series almost as soon as it was launched.  And Chris Weitz (The Golden Notebook) was hired to replace her for the first two sequels, giving them a more mainstream gloss and shooting them back to back in British Columbia.

Last night I was among a handful of male viewers in an audience of several hundred girls and women at the Toronto premiere of Twilight: New Moon. Sometimes a movie is not just a movie; it’s a pajama party. But I was expecting screaming hysteria, and was surprised at how relatively subdued the audience was compared to the one that turned out for the first film. With me was Jessica, a Twi-hard fan who works at Maclean’s. She was so keen to score a ticket, I expected she’d be beside herself. But this self-confessed addict of the Stephenie Meyer saga told me she was expecting the movie to be bad. Nevertheless, she was happy to devour it, like a junkie who’s in no position to quibble with the quality of the smack. She compared it to candy. I’ve found this to be true with a lot Twilight fans, who are often well-read, literary girls longing for a little guilty pleasure. Most of them feel they’re smarter than the stuff that has them hooked. They have a love-hate relationship with their trash. So how bad was New Moon? I’m not quite sure. But it feels like it’s waning, not waxing. The novelty has definitely worn off. And the allegedly timeless romance between Bella (Stewart) and Edward (Pattinson) already feels belaboured—it gets mired in so much lovesick sludge that the movie should be called New Mooning.

Bella, who’s just turned 18, and Edward, who’s a signficantly older man at 109, are now high-school sweethearts at odds in an inappropriate romance. She wants him to “change” her, i.e. penetrate her in every sense of the word so she can be his ageless undead darling. “You’re not going to want me when I’m a grandmother,” she says. But in an act of vampire chivalry that breaks her heart, Edward dumps her for her own good and splits with his family to Italy. The guy doesn’t even answer his emails. “It’s like a huge hole has been punched through my chest,” moans Bella, in one of countless cliches that test Stewart’s considerable talent as an actor and insult her character’s intelligence.

As Bella pines for Edward, she discovers that whenever she’s in danger Edward’s apparition will pop into view like a guardian angel. So she becomes an adrenaline junkie, and persuades her other suitor,  Jacob (Taylor Launtner), to rebuild a pair of motorcycles so she can risk her life. (This is how Stephenie Meyers conceives of plot.) Thus begins another teased-out romance that’s a clone of the one with Edward in the first movie. Jake has a big fat secret. This native boy spends far too much time running around the woods half-naked with a tribe of other native boys. He’s not gay, he’s a werewolf. But it amounts to the same thing: “It’s not a lifestyle choice,” he tells Bella. “I was born this way.”

There are quite a few laughs in New Moon, but I’m not sure all of them are intentional. Jacob spends much of the movie with his shirt off, and when he first bares his torso, revealing an absurdly gym-sculpted six pack, titters spread through the audience, as if we’d stumbled into a male strip club. And some of the romantic reveries between Edward and Bella—Harlequin-like scenes of them gooey eyed in a meadow—also drew uninvited laughter. When the romance is the main event and you can’t take it seriously, something is seriously wrong.  There is also a lot of slack screen time with Bella and Edward  mouthing vacant sweet nothings to each other. What made them intriguing in the first film was the tension, which has congealed into torpor. Their repartee has given way to mush. In this saga of supernatural abstinence, they haven’t even had sex yet and already they’re looking like a tired couple.

Before this review turns nasty, I should say that there’s still quite a bit of fun to be had in New Moon, which is painless to watch. There are some cute comic touches, including an awkward movie date involving a bad action movie called Face Punch. (In an astute local homage to Canadian cinema, the theatre’s lobby sports posters for like Bruce McDonald’s Pontypool and Peter Mettler’s Gambling, Gods and LSD). And although the story drags, there’s real pleasure is in the performances. Behind Stewart’s sulking ennui and Pattinson’s dull gallantry, you can still sense the presence of two strong, complicated actors fighting for air in a stifling script. When Anna Kendrick breezes into view as Bella’s best friend, Jessica, the movie suddenly comes alive. Kendrick, who co-stars with George Clooney in Jason Reitman’s Up in the Air, is a raging talent, and in New Moon she works miracles with a woefully underwritten role. The various supporting vampires are also a treat, from the Cullen family to the creaky elders who rule a Da Vinci Code-like netherworld in Tuscany. As Edward’s adoptive sister, Alice, Ashley Greene is adorable and has the best pixie haircut any vampire could hope for.

Wish I was as impressed by the digital effects. The CGI werewolves are simply not convincing. The effects in the first movie were cheesy, but it felt more forgivable, and at least they weren’t too ambitious. That movie cost just US$37 million. For New Moon, the budget was beefed up to US$50 million, which may sound like a lot of dough, but it’s still pretty stingy for a blockbuster franchise. What’s the deal? Do the producers think teenage girls are just in it for the romance and don’t give a bat’s ass about special effects? If that’s the case, it suggests an underlying cynicism that undermines the the whole principle of naive romance on which the franchise is founded. Summit Entertainment, the production company cashing in on Stephenie Meyers’ readers, seems content to suck the blood out of this series and pander to a captive audience of  female fans without worrying about the rest of us.