What took them so long? 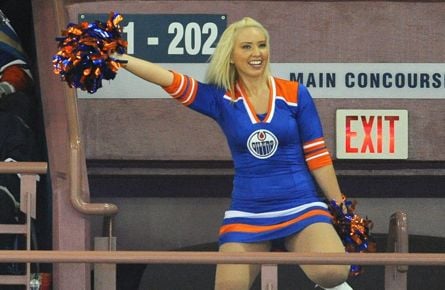 My hard-to-love Edmonton Oilers debuted their new cheerleading squad, the first ever assembled by a Canadian NHL team, in last night’s 4-1 home loss to the Maple Leafs. Some would have you believe this was a black day for hockey, for one of two reasons. I think we can dispense pretty quickly with the sexism argument; deprecating sexism has led to tremendous social and economic progress in the spheres of activity that matter, but the one thing that anti-sexism has never been able to defeat outright is actual sex. Attractive people still earn more money than unattractive ones, officemates still clamber greedily onto each other occasionally, and televised entertainment businesses still find excuses to put male and female crumpet in front of the camera. To complain about this is roughly as sensible as lamenting Copernicanism.

The more difficult argument is that cheerleaders are an otiose, tacky distraction in a setting where hockey is properly venerated. This argument, I think, is much more dangerous than the tendency to which it is opposed. We’ve seen Americans learn to treat baseball like an Orthodox icon—a field of dreams, a holy temple wherein the national genius finds perfect expression. The overall result for baseball of this kid-glove handling by poets has been a catastrophic loss of actual pre-eminence, as gridiron football, a violent game that accommodates gambling, has emerged as the real national pastime. Baseball struggles on, a sport too conservative and tradition-bound to apply the most rudimentary entertainment standards to itself.

Hockey should never fall into the trap of declaring itself a solved entertainment problem and deciding that marketing is henceforth unnecessary until the end of time. That’s why I like the shootout, in its place, and why I praised the NHL’s research-and-development efforts (in an article that was almost certainly the most influential one I wrote this year). As somebody who didn’t have colour TV at home until I was 8 or cable until age 11, I have a deep respect for the need to appeal to people with faster-paced nervous systems than mine, people who are hungrier for stimulus and who squirm during TV time-outs.

I’m thus the psychic equivalent of four or five information revolutions, each with its own moral consequences, removed from the undergraduates of 2010. The issue might not be whether hockey games should have cheerleaders but whether those cheerleaders should be wearing clothes. The admission of a few extra tarts to the hundreds who already underdress for hockey games should definitely bother us less than the cheesy contortions thought necessary to justify their presence—and I’m not talking about their dance moves, I’m talking about the social-Darwinist nods to “fitness” and the corny insistence on the girls’ “pride” in winning a beauty contest.

What makes the failure to accept this elemental fact doubly annoying is that Oiler hockey is marketed pretty casually by those proclaiming the impossibility of profit; really, the fans are left to do most of the work themselves. So even a minor, tentative Veeckian step like hiring cheerleaders is an encouraging sign of something less than total intertia. I think Veeck would say that it is best to either be the first to try a marketing gimmick or the last to hold out against it. Good for the Oilers for going first.