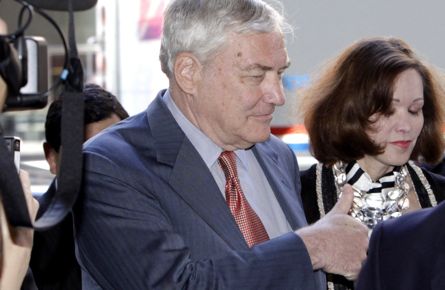 This morning’s oral hearing at the Seventh Circuit Court of Appeals in Chicago brought together two top American legal minds, conservative Judge Richard Posner and lawyer Miguel Estrada (whose own nomination to a federal appeals court by George W. Bush was blocked by Democrats). The hard-charging U.S. Attorney Patrick Fitzgerald had his name on the government’s briefs but did not argue the government’s case in person. The question before them was whether the U.S. Supreme Court’s decision in June to dramatically narrow the definition of “honest services” fraud meant that the conviction of Black and his associates should be reversed because the jury could have convicted them based on a legal definition of fraud that was no longer valid.

Because Posner was so aggressive in his questioning of the lawyers, it is hard to say what the other two judges on the panel might have been thinking. Were they silent at times because Posner was already asking the questions they wanted answered, or because they accepted the lawyer’s position? In a nutshell, Posner seemed to resist the argument that Black and the others should be cleared of one count of fraud for pocketing $600,000 from the sales of Hollinger properties to newspaper-buyers Paxton and Forum that were not authorized by the Hollinger board. But both he and Judge Diane Sykes seemed to have more sympathy for the defendants’ case that they should be cleared of two counts of fraud for taking $5.5 million payments relating of a sale of other Hollinger properties to American Publishing Company. Finally, Posner and Sykes seemed skeptical of Black’s argument that his obstruction of justice conviction (for improperly removing 13 boxes of documents from his office) should be reversed.

Here is how the hearing unfolded:

Conrad Black’s lawyer, Miguel Estrada, had barely begun making his case when Posner jumped in to make clear that he didn’t see how the narrowing of the definition of honest services required a reversal of the conviction of fraud for the non-compete payments that were taken by the defendants when Hollinger sold newspapers to Paxton and Forum. In that instance, there was no documentation disclosing the payments. The defendants argued that it was merely an oversight or accident that the proper documents had not been written up. Posner took the view that the jury must have believed there was an underlying theft if they convicted.

“Your brief is puzzling,” he began his comments to Estrada, explaining he could see how the jury could have convicted on the charge “without thinking this was theft.”

“You have $600,000 and no agreement that entitles you to it. It looks like old fashioned fraud,” Posner said. “How could they have found honest services fraud and not theft?”

Posner was so aggressive in his skeptical questioning that at one point Estrada said, “If I could be permitted three sentences to respond, I’d be appreciative.” Later Posner cut off one of his arguments saying, “That does not make any sense.”

Posner seemed to have made up his mind: “If a rational jury could only have found guilt on theft, then the instructional error drops out.” When Estrada tried to argue that was not so, Posner interjected: “The jury in finding it was a fraud rejected your accident theory and I don’t know what else there is to say about this.”

Estrada tried to illustrate his argument that the jury could have convicted on an alternative theory of fraud—honest services—that did not need to involve a finding of theft and that the Supreme Court had since struck down. When he began asking the judges to visualize the alternative theories of fraud as a series of Venn diagrams, Posner waved him off impatiently, “You’ve lost me.”

When Estrada began to argue that the government had led the jury to believe they could convict the defendants of fraud merely for their failure to disclose the transaction, Posner told him that was not the argument in the brief, and moved on to the next issue: Black’s conviction for obstruction of justice for removing 13 boxes of documents from his Toronto office.

Estrada argued that Black acted without any criminal intent in removing the boxes—he was merely clearing out his office because he was being evicted. But much of the evidence on the now-invalid honest services charge could have led the jury to believe that he was trying to hide something. But Posner was again skeptical, telling Estrada, “I don’t understand your argument on obstruction of justice,” and “I don’t see a connection” between honest services fraud and the obstruction conviction. Estrada argued that a jury is more likely to convict of obstruction if they think the defendant is guilty of a crime, but Posner appeared unconvinced. Posner said “There is certainly corrupt intent,” and “there is plenty of evidence” that Black acted with corrupt intent in removing 13 boxes from his office. At one point, Estrada told him, “It’s difficult to understate the circularity of that argument.”

At this point, Judge Diane Sykes, spoke up and suggested that it would be reasonable to assume that the jury was persuaded by the video tape of Black removing boxes: “On the obstruction count there was visual evidence,” she said. “And visual evidence is very powerful.” (Later in the hearing, the third judge, Michael Kanne, asked a few questions about the boxes: Did they contain documents not relating to the charges? Were the security cameras Black pointed to operating?)

Next up was Assistant U.S. Attorney, Edmond Chang, who got his own grilling from Posner—this time over the fraud conviction concerning the $5.5 million in non-compete payments paid to the defendants in connection with a sale by Hollinger of newspapers to American Publishing Company. The defendants’ lawyers argued that the non-competes were really management fees rightfully owed to the defendants, but that they had been characterized as non-compete payments, without the knowledge of the board of directors, in order to escape Canadian taxes. Posner raised the question of whether a jury could have believed the defendants explanation here—that there was no theft of money from Hollinger—and still convicted on the vague definition of denial of “honest services” because the defendants had concealed what they had done from the board and misrepresented the nature of the payments to shareholders.

“Couldn’t the jury have believed they were owed these management fees and wanted to scam the Canadian government so they pretended these were compensation for covenants not to compete…?” he asked Chang. Chang responded that the government never asked the jury to convict on that basis, and therefore, “It is unreasonable to assume the jury came up with a theory the government didn’t present.”

But Judge Sykes repeatedly pressed him on why the government focused so often on the non-disclosure of information to the board. “How do we know that the jury didn’t convict on that basis?” she asked. Posner also continued to press Chang, asking if the defendants said the payments were merely management fees dressed up as non-compete payments “to rip off the Canadians,” then “couldn’t the jury have believed that and believe it was honest services fraud?” [As opposed to theft.]

Chang insisted that the government never argued that way, and so the jury could not have reached that conclusion. But Judge Sykes again pressed doubt, noting that this was a complex four-month trial, with 16 counts and a lot of evidence, and told Chang that it was “extremely important how the government conceptualizes the fraud.”

She read from the trial transcript emphasizing that the government presented non-disclosure to the board as an “alternative” theory on which the jurors could convict. She said that is “of enormous significance” to how the jury would have understood the case.

The arguments circled back to the obstruction charge. Judge Posner reiterated his view that he saw no connection between the obstruction conviction and the honest services issues, and said a reasonable jury could have concluded that Black had criminal intent because he was facing criminal proceedings “so he may have wanted to see what was in the documents and maybe conveniently lose some of them.”

After the oral arguments, I spoke with Toronto lawyer Steven Skurka, who wrote a book on the Black trial, and who before entering the court room had expected the day to go in Black’s favour. His off-the-cuff prediction after witnessing the oral arguments was that the APC conviction would be reversed, the Paxton and Forum convictions were in play, and that the obstruction charge would stand.

Given the (relatively) small size of the Paxton/Forum $600,000 fraud, he expected that the defendants would get away with time served and that Black would not have to go back to prison. (Black has served a little more than two years of his six and a half year sentence.) If that happens, it will be a great victory for Black but not quite the vindication he has sought.