COSH: 'It looks like Britain will have not just a hung parliament, but one positively tied up in sadistic Japanese-style rope bondage' 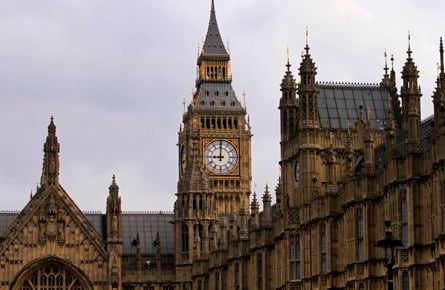 As I write these words, I’m about to enter my 13th hour of watching UK election coverage on the BBC (minus ninety minutes or so here and there for naps). Believe it or not, it has been a breeze. Really, the first two hours, when there are no results coming in and the various panellists have nothing to chew on but some detail-free exit polling, is the hardest part. From then on, it’s nothing but high-calibre entertainment: a grand soap opera full of naked emotion and characters of every imaginable kind from the sweet to the satanic. We have seen everybody from a pair of nigh-unintelligible he-and-she Yorkshire grocers to Joan Collins (a staunch Conservative, and still looking fabulous). As I see it, no living journalist can in good conscience miss an opportunity to see Jeremy Paxman, the Shakespeare of the short-form television interview, in action.

It is all crawling toward an uncertain conclusion, but the sanest guess I’ve heard, though also among the most counterintuitive ones, came from the historian Simon Schama at about 9 a.m. British Summer Time today. Schama did not put it quite this way, but he believes that Britain is about to become Canada—a country governed by a Conservative minority with the tacit support of the Liberals. He didn’t explain why, but here’s my theory.

RELATED ARTICLES
GALLERY: Nude protestors, an angelic Gordon Brown, and David Cameron taking tea— Photos from the UK election (and more to come)
UK election: The cool Thursday-night hang— WELLS: The UK situation shouldn’t be seen as a chance to refight our 2008 coalition crisis
Britain has voted— Hung parliament may result in a coalition government

Literally all the major parties are losers as of this morning. The Conservatives have enjoyed their greatest seat gain since 1983, but are certain to pull up somewhat short of a majority. Labour has been reduced to what are ordinarily called “Michael Foot levels” of parliamentary strength and vote share. The Lib Dem boom has translated into no seat gain to speak of—indeed, perhaps a very small loss. But the Conservatives and the combined Lib-Lab forces may be so close to one another in seat count that neither will be able to govern without the aid of the smaller nationalist parties of the Celtic fringe—the Scottish Nationalists, Ulster Unionists, and Plaid Cymru, in some combination.

It looks like Britain will have not just a hung parliament, but one positively tied up in sadistic Japanese-style rope bondage. In any other election, this might not be a problem. But the idea here is to form a government that will be able to inflict Spartan budget agonies on the public sector—a part of the economy that is most outsized in Celtica. For the nationalist parties, the price of support in the Commons will be the same as it always is: money, in the form of new public services. (Plaid Cymru, the Welsh nationalist party, has been particularly successful on this score over the decades; in 1979 they obtained an eventual total of a quarter-billion pounds in compensation for infirm Welsh miners, and are credited with the creation of the Welsh television station S4C.)

Mervyn King called victory in this election a “poisoned chalice”. Maybe so, maybe not. But flaying the public sector, business, and the dole-dependent class in England while meeting nationalist demands for new handouts elsewhere? That does smell suspiciously like an adulterated beverage. If a Lib-Lab bloc or the Conservative caucus need outside nationalist support to govern, and both outcomes seem probable at this hour, they may be reluctant to do it.

By comparison, the conditions for a Lib-Con deal, although such a thing would be unprecedented, seem relatively easy for both sides to meet. There is some common ground between the parties—on civil liberties, for example. The humbled Lib Dems are probably not in a position to demand cabinet seats, but they will insist upon electoral reform. The Conservatives can promise them a fair binding referendum on it, scheduled for six months or so from now, and reserve the right to oppose reform and back first-past-the-post in the campaign. For reasons I discussed Wednesday, this would be a tempting gamble for them to make. The status quo would probably win such a referendum. And what is there to be afraid of if it loses? Proportional representation is often opposed because it “doesn’t create clear majority governments” and “gives minor parties too much power.” Ooh, God forbid those things should happen!

Meanwhile, Labour is given time to find new leadership and will, at the next election, get to blame and nitpick both the Conservatives and the Lib Dems for the policy choices a Conservative ministry makes in addressing the financial crisis. Going into opposition may be the best choice for Labour right now, and all Gordon Brown has to do to put his party in this position is to resign as PM and be intractable about deal-making. “Fine, you lot take charge. Good luck to you.”

The psephological math may still change at the last minute, allowing the Conservatives or a Lib-Lab arrangement to govern alone. The BBC’s panellists are talking about almost no cases aside from the “natural” Lib-Lab one. Right now, I like the looks of the Schama Hypothesis. It comports well with the Canadian experience; we, too, have a divided House of Commons confronted with an ethnic chauvinist bloc that no one wants to get into bed with if they can help it.