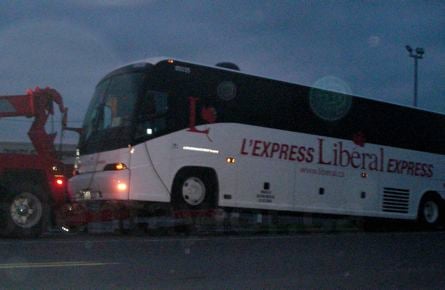 “For the last time: the physical world does not conform itself to journalists’ desire for metaphors!” barked Colleague Coyne in the wake of the breakdown of the Liberal Express yesterday. “Mechanical breakdowns are not “emblematic” of anything, except to reporters who like to press the facts into pre-defined templates of spurious significance (see: narrative), or who think the universe is governed by magic.”

At first I read this and gave a firm, satisfied nod of approval. I don’t think the universe is governed by magic either. But wait: isn’t Michael Ignatieff leader of the Liberal party largely because his predecessor was tried and convicted of exhibiting bad juju?

Thinking back to Stephane Dion’s video suicide, it seems to me that there is some room to regard outbreaks of “bad luck” as non-specific indicators of leadership problems. We call them “leaders” for a reason, right? They cannot be aware of all the details of a campaign, but they are responsible for creating an expectation of professionalism, a spirit of unity, and a climate of accountability. They set the moral tone for an organization and determine how much energy the rank and file will apply to mundane tasks.

If you’ve had a career of any length you’ve probably worked for bad, discouraging bosses and good, inspiring ones: which kind gets the worker bees to mind their p’s and q’s, to put in that little extra soupçon of effort? Which sort of executive will have his people coming into work an hour early because they have to pick a transport supplier and they don’t want the old man to lose face? When patronizing a business, don’t you notice, and judge on the basis of, all kinds of little things like this—things that might be strictly irrelevant in themselves? A smudged countertop, an untidy restroom? And aren’t blameless “accidents” often the way in which an unclear command structure, cronyism, or a dispirited workforce manifest themselves?

I don’t say that yesterday’s stop-and-go should by itself, or will, reflect on the state of the Liberal Party. It really is just a damn bus transmission: I feel faintly silly even suggesting that there could conceivably more to it. But if journalists are somewhat prone to Kremlinological flights of fancy about the internal morale of parties and organizations, there’s a reason for that: by and large, their opportunities for genuine insight are a lot less abundant and useful than you think. The press, aided by ethanol and unscrupulousness, does what it can to ferret out the truth. The better one’s access, the greater the inherent compromises.

The Liberal campaign might be a joyless death march, but the marchers themselves live by an ancient, inflexible code that obliges them to plod on uncomplainingly until they fall. All the rest of us can do is to keep our eyes unerringly fixed upon the place where, ahem, the rubber meets the road.