Warning: not safe for work (outside city limits anyway)

The National Farmers Union looks at an ad based on a classic pin-up, and its interpretation is that the new, competitive Canadian Wheat Board must be struggling in a liberalized agricultural market:

Glenn Tait, NFU board member, says: “We’ve heard that the CWB is having problems filling its pools. This ad seems to show the desperation that would suggest evidence of just that. Farmers have also reported that the agreements that the CWB made with other grain companies are being pushed to the back of the line. Elevators are favouring their own delivery contracts first, and only accept CWB deliveries if there is excess capacity.”

Tait says “Many long-time CWB supporters are deliberately marketing outside of the CWB as a statement of principle rather than a lack of loyalty. The choice signifies their rejection of the undemocratic process used to dismantle the CWB and the Harper government’s appropriation of our resources—farmers’ resources.” 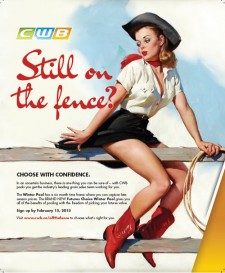 I guess the “appropriation of resources” phrasing refers to the legal theory that the Liberals placed the old monopoly Wheat Board permanently beyond the reach of statute, making its powers a “resource” that was supposed to be the inviolable property of permit-book holders. At least I think that’s what Tait is getting at here. One of the NFU’s mandates is to fight stereotypes about farmers, so it’s not really too cool for him to be spreading goofy notions of precisely the sort one would expect to hear from an angry yokel in a cartoon.

My own interpretation of the ad, if I may dare advance one, is that the CWB, having been obliged by the government to compete for farmer business, is going out and competing for it. They had a “Still on the fence?” message to convey, and someone found an image to go with it—one that happens to work pretty well with an old-school brand. And while I wouldn’t expect an irony-phobic socialist to understand, any normal farmer is perfectly capable of grasping that objects originally considered merely functional or ephemeral can graduate with time into the category of fine art. (I assume, anyway, that farmers’ universal habit of collecting and restoring old farming equipment has something to do with this instinct.)

Heavens, what sort of literalist doofus cavils at the sauciness of a Gil Elvgren painting in the year 2013? Even in their original setting the point of these pin-ups was innocent flirtatiousness, as opposed to pornographic frankness; now, unexpectedly, the NFU finds an Elvgren classic to be a disgraceful departure from the ordinary standards of advertising. “They must be in dire straits to stoop so low,” huffs the Women’s Vice President of the union. Couldn’t the same be said of the NFU itself?