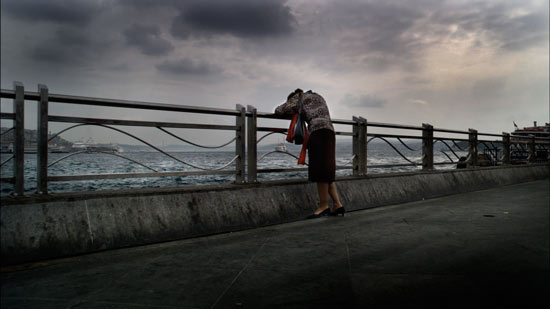 It’s raining again in Cannes, and the films have been as unsettled as the sky. And as moist. Earlier I blogged about clogged drains and nasty plumbing, which have surfaced as a bizarre theme in the program. I cited drain-clearing scenes in Brazil’s Linha de Passe and, by Walter Salles, and Serbis, by Filipino director Brillante Mendoza. Since then we’ve seen another plumbing incident in Gomora, a mafia movie from Italy called by Matteo Garron. And my National Post colleague Chris Knight reminded me that the incarcerated characters in Blindness spend much of their time groping around floors slick with human waste. Chris, in fact, he penned a clogged sink blog called Plumbing the Depths of World Cinema. Wish I’d thought of that.

We’re halfway through the festival. No film has blown us away. Last year, just two days into the festival we had a solid Palme d’Or contender in what became fatally known as “the Romanian abortion film” (4 Months, 3 Weeks and 2 Days). And it did, in fact, go on to win the top prize. Now at the end of Day 6, we’ve seen some solid films worthy of awards but not an obvious Palme d’Or contender. If the trade paper surveys are any indication, the most acclaimed film so far is Three Monkeys by Nuri Bilge Ceylan. I love the work of this Turkish director, in particular his previous film, Climates. He is also a brilliant photographer, and captures real time in slow, static compositions that are, well, like watching paint dry, but in good way. The man loves to shoot weather, as you can see by the image from Three Monkeys above. Yet his new film moved too slowly even for my taste, especially because it’s a noir drama about a corrupt politician, who gets his driver to take fall for him in prison then cuckolds his wife. For that kind of business, you need a stern tempo to maintain the tension. Still, I’ve learned not to judge the pace of films seen early in Cannes in a jet-lag daze.

Other impressive titles include Waltz with Bashir, an Israeli animated documentary about an atrocity, and Argentina’s female prison drama, Leonera, whose star, Martina Gusman, is emerging as an early contender for best actress. But she faces competition form Arta Dobroshi in La Silence de Lorna, another strong feature by Belgium’s Dardennes brothers, who have already won the Palme d’Or twice. We saw that film this morning, the latest in a flood of dramas about dispossessed folk at the mercy of the city who become criminals through dire necessity or tragic accident. The only sunny moments in this dark program have come from films out of competition, such as Kung Fu Panda, Indiana Jones and Woody Allen’s latest. Tonight we saw James Gray’s Two Lovers, starring Joaquin Phoenix as a lovestruck naif with his Jewish parents after attempting suicide. Although it’s only subliminally comic, it portrays relationship with the observational detail Woody Allen once specialized in before he gave up on reality. It was a relief to finally see a movie in competition that wasn’t about the end of civilization as we know it—and whose characters needed therapist rather than a plumber.