what dion must do to win the next election (hint: it's right under his nose)

Because I am widely regarded throughout the dominion as an expert political strategist (very savvy), people will often approach me in public with questions relating to what their preferred political leader must do to break out of the pack and triumph in the next election campaign.

Usually, I respond by smiling broadly and saying something harmlessly generic like, “Shut up” or “This really isn’t the place to discuss this, Mr. Layton.” After all, expert advice doesn’t just grow on trees! (Although if you retained the services of a very experty strategist like me, you would always know what does grow on trees. Apples, for instance.)

But I am in a generous mood today and will therefore share with you the opinion of one expert (me – very savvy) on what Stephane Dion needs to do to win the next election.

I know, I know – it’s sounds absurd… until you realize he has no other option. This is Dion’s last real chance to reinvent himself before the next campaign – to convince the Canadian electorate that beneath his awkward, over-earnest and tweedy exterior beats the heart of a man at home in Marlboro Country, a man of purpose and resolve and denim, a man capable of chafing the cheek of any woman foolish enough to accept his kiss – which would be all women, by the way, on account of his moustache.

Forget speech lessons. Forget advertising. The only image-changing option with sufficient intrigue, charisma and raw machismo to catch the attention of voters is to grow a moustache. I’m not talking about one of those impeccably groomed and dignified Jack Layton jobbies. I’m talking about a Magnum-style ’stache, thick and unkempt – pound upon pound of hirsute manliness perched upon the aspiring prime ministerial lip.

Yes, a moustache is the answer. A moustache will lead to Stephane Dion’s enhanced popularity and, come the fall, a panicked Stephen Harper’s desperate but ultimately unwise decision to implement Plan Afro. 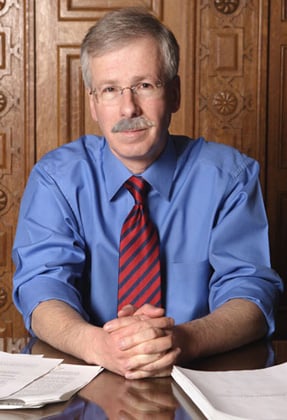 FILED UNDER: As for layton? needs to grow a pair