What you need to know about the arrest of Zhou Yongkang

Former member of the Politburo accused of taking bribes and leaking state secrets.

By The Associated Press December 7, 2014 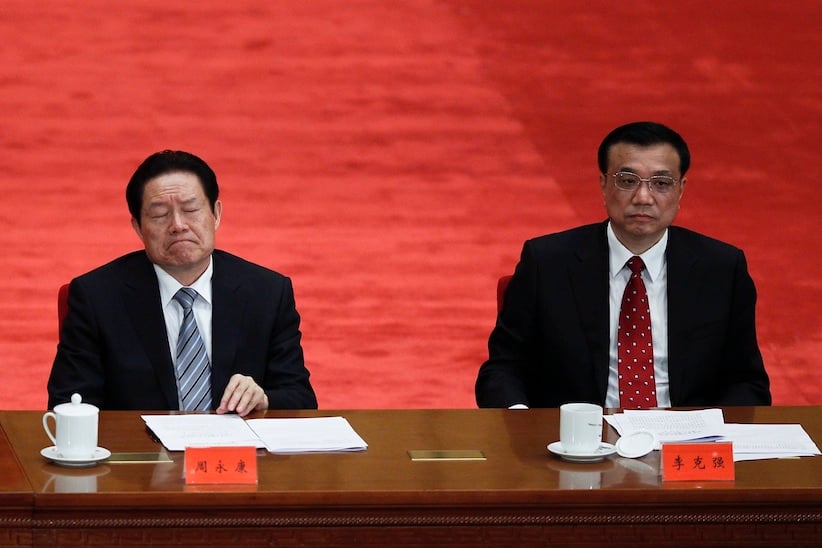 BEIJING — Chinese authorities announced that they have arrested Zhou Yongkang, a former member of the all-powerful Standing Committee of the ruling Communist Party’s Politburo, on accusations including taking bribes and leaking state secrets.

Zhou is the highest-level official to fall in Chinese President Xi Jinping’s anti-corruption campaign, which began in late 2012.

Here’s a look at Zhou’s rise and fall, and what could be in store for the man who once oversaw China’s vast apparatus of police, state security, prosecuting offices and courts.

Zhou was born in December 1942 to an impoverished family in a little-known village in eastern China. He was the eldest of three boys born to eel fisherman Zhou Yisheng. Zhou was a diligent student, and he excelled academically. In 1961, he enrolled at Beijing Institute of Petroleum, which is now China University of Petroleum, to study oil exploration. He is the only son in his family to attend college. In 1967, he was sent to work at the Daqing oil field in northeastern China, where he ascended in the ranks. By the mid-1980s, he headed the Liaohe Petroleum Exploration Bureau and served as mayor for the city of Panjin in Liaoning province before moving to Beijing to work as deputy petroleum minister.

In Beijing, Zhou moved to the powerful state-owned China National Petroleum Corp., where he worked for a decade, serving as its top executive the last two years. After a short stint heading the Ministry of Land and Resources, Zhou became Communist Party chief of the populous southwestern province of Sichuan, where he built a strong power base with his proteges within three years.

He returned to Beijing in 2002 to join the party’s Politburo and become the police minister. Five years later, he reached the apex of his political career when he secured a seat on the Politburo’s all-powerful nine-member standing committee. He oversaw the party’s political and legal affairs and came to be known as China’s security czar until his 2012 retirement.

Immediately after Xi Jinping took power in late 2012 as general secretary of the Communist Party of China, he launched an intensive crackdown on corruption. He warned that fighting graft is a life-and-death issue for the ruling party because pervasive corruption had severely eroded public confidence in the party and challenged the legitimacy of its rule.

Xi has vowed to go after both “tigers” and “flies,” targeting high-level and low-level officials alike. This year, the campaign also began to target “foxes,” or corrupt officials who have absconded overseas with ill-gained loot. Members of the public started to speculate whether the campaign would target officials at the highest level — namely those on the Politburo’s standing committee. The party, however, had yet to implicate a top leader in an unwritten rule aimed at preserving party unity.

Zhou formally retired in November 2012 at the 18th party congress, which installed Xi as the party’s general secretary in a once-a-decade power handover. Merely 18 days after the conclusion of the congress, Li Chuncheng, a deputy party chief of Sichuan and one of Zhou’s favoured proteges, was placed under a corruption investigation, triggering speculation that Zhou was also being targeted. In the following months, many of Zhou’s royalists in Sichuan and in the oil industry fell to corruption charges.

Zhou was last seen in public in October 2013. The party leadership launched a formal investigation into Zhou the following December, although it was not announced to the public at the time.

Media reports said Zhou’s relatives were taken away by authorities for investigation. Reports that more of Zhou’s proteges were placed under investigation continued to appear.

In July, authorities announced the probe against Zhou and placed more of his associates under investigation. Just after midnight Friday, the Politburo stripped Zhou of his party membership, accusing him of wrongdoing including bribe-taking, leaking state secrets and keeping mistresses, which is a violation of party discipline. National prosecutors then announced Zhou’s arrest, kicking off a criminal case against the former police chief.

Zhou is certain to be indicted, tried and convicted, though details of the criminal charges against him are not yet clear. A line in the official announcement that investigators have found other evidence of as-yet unspecified criminal behaviour could be an indication that prosecutors may negotiation with Zhou on charges and penalties, based on how co-operative he is.

It is unclear how open Zhou’s trial will be, with analysts noting that a charge of leaking state secrets could provide a reason for authorities to close at least part of the court proceedings and avoid the possible disclosure of dirty politics at the party’s highest level.