What's next for Chris Hadfield -- and the Canadian Space Agency 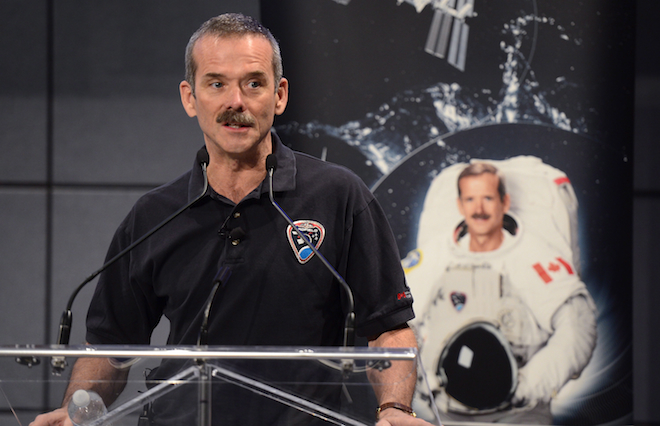 Chris Hadfield speaks at a news conference in Longueuil, Que., Monda, where he announced his plans to retire from the Canadian Space Agency. Paul Chiasson/CP

The life of an astronaut often means being very far from home. After representing Canada on threeseparate space missions, including the most recent—in which he became the first Canadian to command the International Space Station (ISS)—Chris Hadfield, who’s spent much of the last two decades stationed in Houston, is coming back to Canada for good. As of July 3, he announced today, he’ll be retiring from the Canadian Space Agency (CSA) and moving home. “[I’ll be] making good on a promise I made my wife nearly 30 years ago,” the 53-year-old said, “that yes, eventually, we would be moving back to Canada.”

Hadfield’s retirement isn’t entirely unexpected. One of four Canadian astronauts (including Julie Payette) selected in 1992, his career has spanned over two decades. “I’m the last astronaut of my class that’s still around,” he acknowledged today. Yet there have certainly been older space travelers than Hadfield, like Russian cosmonaut Pavel Vinogradov, 59, who in April became the oldest ever to walk in space. His retirement clears the way for Canada’s other two active astronauts, Jeremy Hansen and David Saint-Jacques; recruited in 2009, neither has yet been assigned to a mission. Hadfield has been a role model and mentor to both; the next Canadian to set foot on the ISS will be Hansen or Saint-Jacques.

What Hadfield does next is an open question. There’s already been speculation about whether he might enter politics, like former astronaut Marc Garneau, or seek a leadership role at the CSA, like Steve MacLean—a role in which some observers think he’d be welcome, following MacLean’s abrupt departure earlier this year. For now, Hadfield isn’t saying. His body is still recovering from the rigors of space: he’s lost up to five per cent of his bone density in some areas, just one of the nasty side effects of living in zero gravity. Going for a jog still makes him feel light-headed. Hadfield expects to be back to normal by Labour Day, but building back his bone density could take about a year, according to his CSA flight surgeon, Dr. Raffi Kuyumjian.

As Hadfield plans his next move, he intends to keep giving presentations about space, using the skills he became famous for during his time aboard the ISS. His videos about how astronauts wash their hands in zero gravity, or why there’s no crying in space, have racked up millions of views. His stunning photos of Earth have been seen, published, and retweeted around the world. And his lively, engaging presence on just about every social network, from Facebook to Google+, where he shared details of his life in zero gravity, has cemented his position as the most famous astronaut alive. Hadfield had about 20,000 Twitter followers at the time of his launch to the ISS, on Dec. 19; today he has well over a million. Commanding the ISS was the goal of a lifetime for Hadfield, who first decided he’d become an astronaut at age 9, when he saw Neil Armstrong and Buzz Aldrin land on the moon. Now that he’s achieved it, he’s ready to move on, and come home.