Opening Weekend: When is a motion picture truly 'important'?

The phrase ‘important motion picture’ gets bandied around a lot, especially as we approach the Oscars, where art tends to be judged by the weight of its subject. Important motion pictures are supposed to do more than make you feel good. They’re supposed to make you feel you’re doing good, just by watching them. The problem is, so many movies billed as important are merely self-important; and righteous drama can make for tedious viewing. This week offers a choice of two important motion pictures—Defiance and The Class—plus a light comedy that’s quite content to be of no importance whatsoever, Last Chance Harvey. As the true story of a Holocaust rescue mission, Defiance has its merits. But the one that I urge you to see is The Class (Entre les murs); I can’t recommend it too highly. It takes place almost entirely in a high school classroom, where a white liberal teacher is confounded by the insolence of his multi-ethnic students. Although it’s set in France, it should be required viewing for every parent, student and teacher in North American. The Class is one of those rare movies that actually is important. Which doesn’t mean it has to be seen out of duty. It’s as entertaining as it is essential.

Directed by French filmmaker Laurent Cantet, this verité drama is based on a book by former teacher François Bégaudeau, and was inspired by his own time in the classroom. Although he has no acting experience, Bégaudeau also stars in the film, as an embattled teacher named François. And his performance is flawless. He is at least acting on a level playing field with his co-stars: the 25 students are all non-professional actors, recruited from a pool of 50 students at a functioning school in a suburb of Paris. The teachers and most of the parents are actual teachers and parents. The filmmakers conducted workshops with a group of students for an entire school year, molding the script around their improvisations. “The adolescents never had a script in hand,” says Cantet. “When they improvised according to requested situations, they were able to come up with their own dialogue.” They also showed a facility for reproducing dialogue on subsequent takes—”perhaps,” suggests Bégaudeau, “because school is a continual invitation to play a role, to dissimulate, to cheat. The worst students often have this very talent, because they have to compensate for their difficulties with chatter, lying, make-believe.”

Although Bégaudeau’s character is sympathetic—a passionate instructor who challenges his students—the students also challenge his arrogance and cultural biases. The scenario of the idealist trying to tame a tough class may seem familiar, but Cantet’s film doesn’t resemble the Hollywood genre of scholastic triumph, with the inspirational teacher elevating a gang of disaffected teens to brilliant heights. It’s not Dangerous Minds or The Dead Poet’s Society. But it is intensely vital. François is a well-liked, liberal teacher with a sense of humour, but when he’s pushed he falls back on hard-wired traditions of French colonial authority, which the students confront with new doctrines of politically correct behavior. The drama evolves into a clash of wills without heroes or villains. And as we watch an insolent French-African pupil test his teacher’s patience, while risking his own immigrant status, our loyalties are torn—in art as naturally as they would be in life. 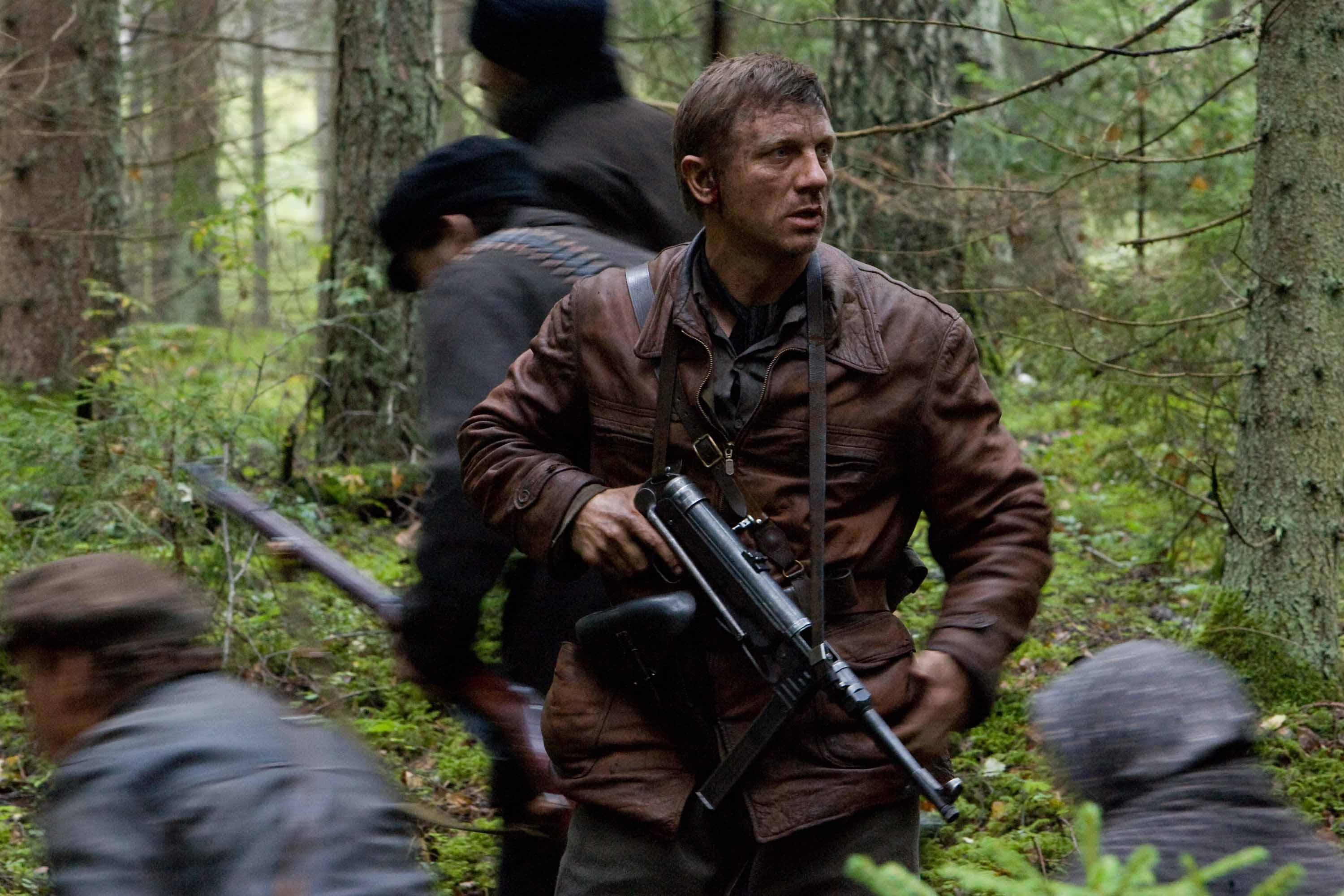 Daniel Craig deserves a lot of credit for taking on this arduous role and acting his butt off with an East European accent in the bone-chilling gloom of a Lithuanian forest. Craig is clearly not content to rest on his luxurious laurels as James Bond, determined to prove that he’s an actor first and a star second. In Defiance, he plays Tuvia Bielski, a Belarussian Jew who leads a resistance movement to rescue 1,200 refugees from the Nazi Holocaust. After Tuvia’s infant daughter and wife are killed in a mass execution of 4,000 Jews in the Novogrudok ghetto, he and his brothers escape with other survivors to the nearby Naliboki Forest. Much of the drama hinges on a conflict of Cain-and-Abel ferocity between Tuvia and his impetuous brother Zus (Liev Schreiber), with Jamie Bell cast as the younger brother who is caught between them. As Tuvia builds a Robin Hood band from a growing refugee community in the woods, Zus joins the Russian Army to fight the Nazis, only to discover another kind of anti-Semitism within their ranks.

The actors are compelling. And Director Edward Zwick inflects the material with his trademark mix of moral zeal and high adventure, as in previous epics like Glory, Legends of the Fall and Blood Diamond. With Defiance, Zwick has a strong (and important) story to tell—based on Nechama Tec’s non-fiction book of the same name. And what the film reconstructs is extraordinary: a forest hideout evolves into a makeshift village, complete with hospital, mill, metal-shop, bakery, and bathhouse and synagogue. But Zwick fails to reconcile the drama’s predominant tone of spartan authenticity (grounded in wintry Lithuania) with “movie moments,” flashes of overripe drama that make you think he would rather be directing a big, handsome David Lean spectacle than repatriating a bleak patch of Holocaust heroism.

To read my piece on Defiance in the magazine, which includes an interview with the director, click on: This guy’s not on Cruise control 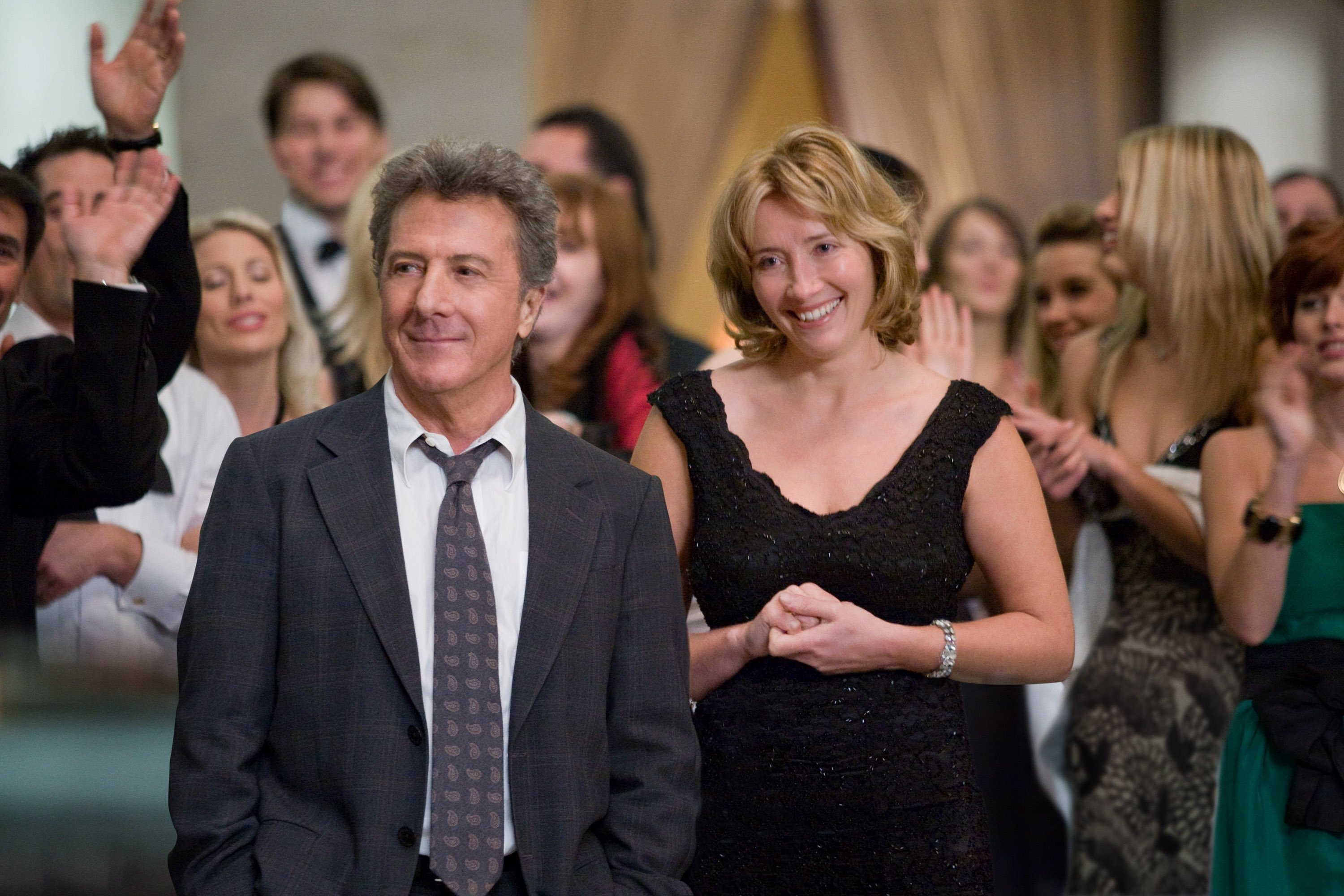 By no stretch of the imagination could you consider this blithe confection “important.” The operative word in this case is “amiable.” The movie’s overall lack of ambition is remarkable, and strangely refreshing. Hollywood’s formula for romantic comedy has become so torqued with high-concept gimmickry and physical farce that Last Chance Harvey‘s quiet modesty comes as a tonic, as underwhelming as it may be. Perhaps I just came to the film with abysmally low expectations, but I was pleasantly surprised. Starring Dustin Hoffman and Emma Thompson, Last Chance Harvey a middle-aged romance that revolves around a wedding. But the romantic leads are not the ones getting married, and unlike 27 Dresses or Bride Wars, this is not another lurid wedding comedy.

Hoffman plays Harvey, a Manhattan jingle writer who’s job is on the line. After being warned by his boss (Richard Schiff) hat he has one last chance to redeem himself, he flies to London to attend his daughter’s wedding on the weekend, promising to be back by Monday. He arrives only to discover that his daughter (Canadian actress Lianne Balaban) has chosen to have her stepfather (Josh Brolin) walk her down the aisle. That’s enough to make Harvey turn right around and head back to the airport, only to miss his plane and end up in a hotel bar seeking solace with Kate (Thompson), an employee with the Office of National Statistics, whose life has reached its own romantic dead-end.

Although Last Chance Harvey is no nearly as good as Vicky Cristina Barcelona, it’s another tourist movie in which the location plays as starring role. The characters spend lots of time strolling the banks of the Thames. And the tone is also distinctly unAmerican. British writer-director Joel Hopkins (Jump Tomorrow) serves up romantic comedy cliché with a soft, supple backhand, leaving Hoffman and Thompson lots of room to work their intelligent charm. You get the sense neither is taking the job too seriously, yet even at half-speed, they create some convincing chemistry. Maybe I’m damning with faint praise, but these are two actors I don’t mind wasting time with.