When Is It OK For a Comedy To Do an Hour-Long Episode? 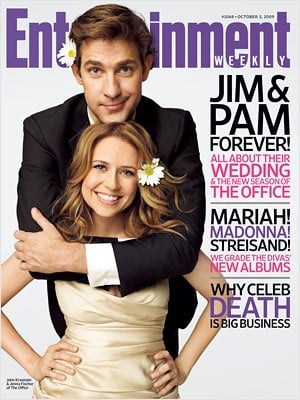 Tonight is the big Office event that we’re all looking forward to, though maybe a little tired of hearing about: the pedding of Wim and Jam wedding of Jim and Pam. It is an hour-long episode, as “event” episodes usually are. I haven’t seen the episode yet, but hour-long episodes of The Office always fill me with a bit of trepidation; as many critics have noted, the show’s structure and style isn’t really built for the hour-long format, with the result that long episodes often feel like short episodes padded out. (And the fourth season suffered in particular because of NBC’s decision to order a bunch of double-length episodes.) Not that there haven’t been good hour-long Office episodes. But like Seinfeld, another NBC show that didn’t usually hit home runs with one-hour episodes (“The Boyfriend” is the exception), it usually tells small stories and has to struggle to fill a “big” hour-long slot.

This doesn’t apply only to sitcoms; everyone who watched that show remembers the disaster that ensued when The Twilight Zone was expanded to an hour for one season. Running time is a tricky thing; a show like The Office does great when it has 30 minutes instead of 20 (like the original, and like some of the “super-sized” episodes NBC used to do), but 40 minutes is a problem, usually. And let’s not even get into the series finale thing: it’s generally understood that a sitcom will often have better artistic results with its series finale if it sticks to the half-hour length, the way Mary Tyler Moore and Newhart did, rather than doing a bloated, over-long, night-busting finale like Seinfeld or M*A*S*H did (I said “artistic” results, not “ratings” results; M*A*S*H got great ratings for the finale, but a half-hour version would have been a better episode).

However, the wedding may be a big enough story to make the double-length format work for The Office tonight. Which leads me, finally, to the question I brought up in the subject heading: when does it work for a half-hour show to expand to an hour-long story? What are some double-length episodes that work, and is there anything they have in common that makes them work? Of course the reason for doing an hour-long episode is that the network wants one. But what are some non-crass reasons for doing an hour-long show?

(I should add that not all two-parters are true hour-long stories. Sometimes a two-part episode really consists of two completely separate stories, both of which follow the typical half-hour structure, but have something connecting them. You’ve seen them, and they go like this: Week 1, the story seems to be finished, but there’s a twist that results in a “To Be Continued” cliffhanger. Week, 2, we get a story that follows up on the events at the end of Week 1. But the episodes are both separate entities. An example is King of the Hill‘s two-parter that spanned the third and fourth seasons. Part 1 was about Peggy and Hank feeling depressed on their anniversary, and ended with them working off their depression by going skydiving, only for Peggy to plummet to her apparent demise. Part 2 was about Peggy recovering from her near-fatal accident; the episode touched on some issues raised in the first episode, but it was a separate episode with separate writers and its own self-contained story.)

The obvious reason for doing a double-length story is that there’s a story that’s just too big to fit into 20+ minutes. I don’t know how many of those there are, though, since most stories that are appropriate for a sitcom are appropriate for a half-hour format. (Same with your Twilight Zone type of story, a short story with a surprise ending: if you’re not pitching a small story that can lead to a big twist, then why are you pitching it to The Twilight Zone instead of some other show?) That probably happens most often if the story for the episode contains elements of some other genre, like mystery, that usually requires more time to get the plot worked out. The Simpsons, which almost never does two-parters, did one for “Who Shot Mr. Burns?” and it had to be a two-parter, mostly because of the audience-participation gimmick, but because it needed the whole first half-hour to plant all the clues. (And even then, the second half feels heavily padded.) South Park does this sometimes, where they’ll expand to two parts simply because they get to the end of part one and realize they’re not finished yet.

Another reason for doing an extra-long episode is that something extra gets added during the writing or rehearsals, and an expanded length is the only way to incorporate the new material without killing the story. This has happened a few times. What started as a half-hour script for WKRP got expanded to a double-length episode when the guest actor started throwing in a bunch of improvised scenes with Howard Hesseman (they had been in the comedy troupe The Committee together), and the showrunner decided that they should expand their scenes together. So it became a basically small story, but with every scene running longer than usual.

And with the Keith Hernandez episode of Seinfeld, the need to showcase the guest star and give him a bigger-than-usual role for guest characters meant that if it had been a half-hour, they’d have had to cut down the other two stories pretty severely. As an hour, it may feel a little padded (though it’s one of my favourite episodes from my favourite Seinfeld season), but at least the Vandelay Industries and “spitter” stories can get all the time they need.

One show that had an interesting and fairly unique approach to the double-length episode was Taxi: every season they would do a special two-part episode that consisted of solo vignettes for each of the main characters, connected by a framing sequence where they’d tell stories about their lives (their experiences in a particular cab, the jobs they got while laid off from taxi driving, etc). The episodes weren’t separate from each other, but they didn’t have an hour’s worth of plot; they were patterned after two-part clip shows that some sitcoms would do, except all the clips were new.

FILED UNDER: Hour-Longs Sitcoms The Office