When the Stones were truly stoned

Jagger on the 8-year-old drug smuggler with the band: "It didn't do him any harm!"

Images from 'Stones in Exile'

“We were young, good-looking and stupid. Now we’re just stupid. Nixon was in the White House, the war in Vietnam was going on, and we didn’t know anything about that because we were stuck next door in Villefranche Sur Mer making this record.”

Mick Jagger had the patter down pat, and recited it twice, first in French, then in English. Taking the stage to wild applause in the Theatre Croisette, that’s how he introduced Stones in Exile—a documentary about the 1972 recording of Exile on Main St. in Keith Richards’ rented Villa Nellcote mansion a stone’s throw down the coast from Cannes. Mick seemed pleased as punch. Looking dapper in a sleek grey suit, the 66-year-old elder statesman of rock generated more heat in Cannes than any movie star who’s touched down here all week. After all, there are stars, then there are icons.

After the screening, Jagger, with gentlemanly poise, sat down to entertain questions from the audience with director Steven Kijak and the some of the crew. Given that the film documents one of the most debauched period in the history of one of the world’s most debauched bands, the discussion was rather tame, though Mick did have a bit of a giggle about the cute eight-year-old blond kid who served as the house drug smuggler at Villa Nellcote while the band made music history. I’ll get back to that Q & A later in this post, and by tomorrow I’ll hope to post some video that I shot from the fourth row (as soon as I can find a suitable cable to download it). Meanwhile, here are some notes on the film, which I guess is  old news back home. It’s already been shown on TV. And I just talked to my 92-year-old mother on the phone who knew all about it. She’d seen Mick on Larry King. 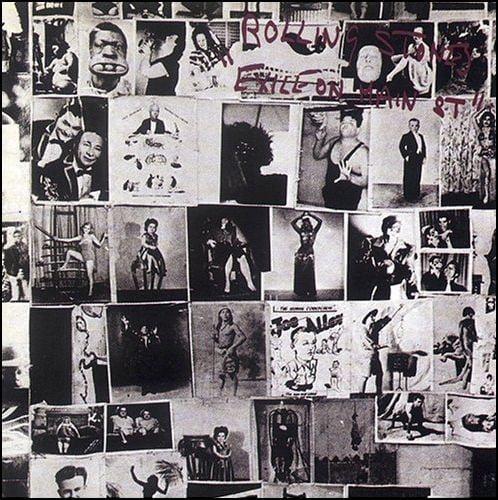 Exile on Main St., the album

Bolstered by some fresh interview with the band, the documentary unfolds largely as a montage of stills from French photographer Dominique Tarlé, who hung around Keith’s mansion for six months during the making of Exile, plus  footage shot by the late Robert Frank during that period for his Cocksucker Blues—a verité road doc about the band, which the Stones suppressed with a draconian deal that allowed it to be shown only once a year, and only if Frank was present in the theatre. I saw one of those screenings back in the day, and it showed enough sex and drugs to cause some embarrassment. Sure, the Stones built their brand by cultivating  a dangerous image, but there’s a fine line between sexy and  gross. And as it was pointed out in the Q &A the Stones owned the footage. They’ve got quite good at that—owning their stuff—even if they began by ripping off black music.

Tarlé’s photographs, along with outtakes from the recording sessions, tell most of the story, which has a Paradise Lost arc to it. At first it’s all fun and games. They talk of taking the kids to the zoo and beach. And the drugs knew their place. The photographer recalls Keith’s marching orders: “You get high on music and photography, and I’ll take care of the rest.”

Anita Pallenberg, Keith’s girlfriend at the time, remembers Jack the Cook, who didn’t just go to the market for groceries: “Where’s Jack? Oh, it’s Thursday”—which meant a drug run to Marseilles. “We got heavily in to drugs, breakfast, lunch and dinner,” says Palleberg. Then there was eight-year-old Jake Weber, now an actor on The Medium. The kids at Nellcote, he recalls, would roll the joints for the band—“that was my function in life.” And Mick sums up the whole escapade by saying: “You’re in control of this wonderful lifestyle and the lifestyle starts to choose you.”

They also talk about the music, a process of catching lightning in a bottle during rambling sessions of intoxication and chaos. Much of the album was finessed in a Los Angeles studio, after the band had fled France, fearing arrest. There is an amusing story about how Jagger came up with the words to Tumbling Dice by talking to his black housekeeper, who educated him in the basics of gambling. There are some nifty shots of the lyrics to Casino Boogie, cut up on strips of paper, William Burroughs style.

During the Q & A after the screening, the director talks about being led into the Stones “secret vault” of archives in London. “It looks like that scene in Raiders of the Lost Ark, everything of Stones from the beginning of time,” said Kijak. “And there were about 30 or 40 boxes of it, with film in it, which was like seeing gold bullion on a shelf.”

Jagger fielded a couple of question about whether the whole thing made him feel nostalgic. “Nostalgic?” he says, rolling the word around his mouth like a foreign object. “What would that be like? . . . It was very good time. And it’s very well-evoked in this film. So if you want to miss the period all you have to do is buy the DVD and put it on.”

Raking through the archives, he said, is “a bit like when you look through your family scrap book. You look at these old pictures and you get these nice feelings, but then you’re actually working. ‘That was a good one, that was rubbish.’ You have to be professional.  When you first see a picture it’s like seeing you and your mum years ago. Sometimes you can’t remember who these people were. We started looking at still pictures and came across this little boy with blond hair. Who was that kid? Let’s find this kid! [in a mock mogul growl] How did we find him?”

Kijak reminded Jagger that his name was Jake and that a book had been written “”He talked about being an eight-year-old drug smuggler. They strapped cocaine to him. He’s a TV actor now, He’s pretty well known. He’s in The Medium. He’s Patricia Arquette’s husband.”

“It didn’t do him any harm!” roared Jagger, pouncing on this quaint notion of childhood drug-running as a character-building enterprise.” Then he added, with a dash of politesse: “It’s not a recommended vocation for an eight year old.”

When Jagger was asked how the band managed to play music with all those drugs around, he looked mystified and stated the obvious: “Easy really.” Then he added, “I was just reading this article today in the New York Times on these marijuana cooks, and there’s this whole new range of cooking based on the fact that they smoke a lot of dope. There’s a whole movement in America of these pot smoking cooks. So it can be done. I’m not saying it’s great to smoke pot and sing.”

Asked about his favorite directors and actors, Jagger, who has produced and acted in his share of movies, couldn’t be bothered to rhyme off names. Finally he said, “ There’s so many good directors and so many great actors. Most of them aren’t here. One or two directors I like. Um….who do I really like? In the day, it was the release of Apocalypse Now, which came out the same year as Exile on Main Street. It was one of my favorite films of the period.”

A Frenchman (who else?) asked Mick if he preferred Jean-Luc Godard or Martin Scorsese, who have both made movies about the Stones.

“What a terrible duo, really,” said Jagger, dripping sarcasm. “Get them in a room talking about film. That would be quite interesting to do, wouldn’t it? Those two talking together. One Plus One, the Godard film, is a very good film. But no one’s been able to explain what it’s about.”

Then off they went, and it was back to business as usual in Cannes. Racing off to see a dreadful Italian movie, after having just spent longer lining up for Stones in Exile than I’d spent in theatre.