Where the rainy-day money went 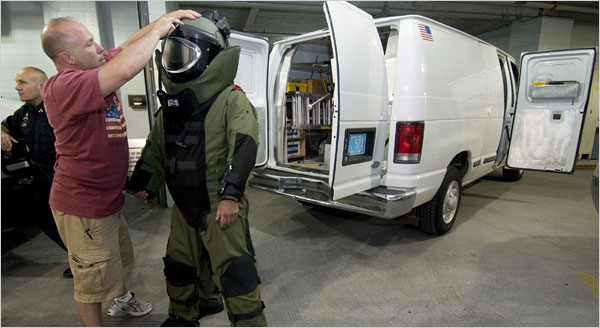 This very solid article by David Johnston of the New York Times (from which the above photo also comes) puts the best old-fashioned reporting virtues to work telling a subtle, important and poignant story. It focuses on the police force of Providence, Rhode Island, and the massive investments the force made after 9/11 on counter-terrorism equipment and doctrine.

All of that money sunk into staving off a catastrophic attack. An attack that hasn’t come. Meanwhile the money and most of the equipement can’t be used for the day-to-day challenges of “ordinary” police work, which is no less life-or-death in its importance.

Multiply Providence’s predicament by thousands of communities across the United States and, indeed, to some extent around the world, including here in Canada.

Johnston’s article is smart enough to recognize that the existence of a debate — and, indeed, of a great big problem — does not necessarily prove the existence of a bad guy, or even of a mistake. He interviews the guy in charge of anti-terrorism liaison for the Providence P.D., who defends all the spending: “I don’t think that you can let your guard down. Just because nothing has happened doesn’t mean that something won’t.”

And he interviews the deputy police chief, who has to run a force even on the days when jihadis don’t come knocking and who can’t afford to pay for overtime: “We know what our problems are. If you say to us the money can only be used for homeland security or equipment, it really limits how effective we can be in fighting crime.”

I’m not recommending this story for a Pulitzer, but simply as an example of a reporter’s good day or so at the office. It identifies a problem, resists cheap point-scoring, depicts policy dilemmas as human challenges. Journalism too often denies complexity. This story doesn’t.