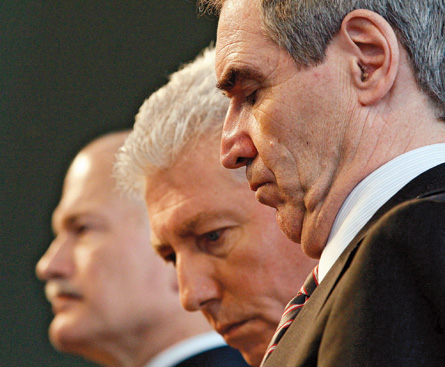 The Liberals won’t be able to say they didn’t see it coming.

In the first week of January—eight months ago—Stephen Harper sat for an interview with my boss, Ken Whyte. As he discussed the year he’d just finished, and the one just ahead, Harper kept returning, again and again, to that nastiness last December in which the opposition parties responded to Harper’s fall economic update by proposing a Liberal-NDP coalition government with Bloc Québécois support.

You might think that business was all behind us. Harper didn’t.

“Obviously, if we had an election today somebody will have a majority because it will be either Canada’s Conservative government or the coalition,” the Prime Minister said.

The boss’s ears perked up. “So you think the coalition’s going to stick together?”

Harper elaborated. “Well, I’m saying if we had an election, if they were to defeat us—and you know my view—if they defeat us the only constitutional, political and moral option is to ask the people to choose who should govern. And then there will be two choices. And somebody will win a majority if those are the choices.”

By now the boss was realizing this was a big part of Harper’s message for the day. “So you think they’d actually run as a coalition?”

“I don’t think they have any choice,” Harper replied. Oh-ho. “If they defeat us as a coalition they have to run as a coalition, and I think those will be the real choices before the electorate. The electorate will know that if you’re not electing the Conservative government you’re going to be electing a coalition that will include the NDP and the separatists.”

I reprint this exchange at some length because I have found that Stephen Harper usually tells you what he’s up to. Oh, sure, he throws it in with a bunch of distraction, misdirection, and outright flip-flopping. But usually at least in hindsight you can find a neon-bright thread of intent. I have also found that his opponents almost always ignore such threads, preferring to believe Harper is up to something else that would make him easier to beat.

He couldn’t possibly be clearer here. And he and his surrogates have reprised every element of this argument in recent weeks, as the possibility of a fall election becomes less hypothetical and, thanks to Michael Ignatieff, moves closer to an inevitability.

On Aug. 25—fully a week before Ignatieff’s Sudbury speech in which he announced the Liberals will no longer vote with the government in the Commons—Harper spokesman Dimitri Soudas had these curious comments after Harper met privately with Jack Layton. “It was also clear to us that the NDP prefers and wants to work with the Liberals and the Bloc Québécois,” Soudas said. “Mr. Layton probably asked for this meeting so that he can pretend he’s not working with his coalition partners. But the reality is that he is.”

That same day, a page went up on the Conservative party website with the title, “Ignatieff Will Bring Back Coalition.”

The Liberals, the NDP and the Bloc do not appear to have given any of this a second’s thought.

It’s easy to understand why they prefer to snooze. The whole notion of an anti-Conservative coalition had more or less vanished from the public discussion. Ignatieff had completed his staged retreat from the scheme. Nine months ago he publicly supported, vocally and with his signature on a petition to the Governor General, Stéphane Dion’s attempt to wrest power from Harper with the support of all opposition MPs. By the new year Ignatieff’s formula was “coalition if necessary, but not necessarily coalition.” Since the January budget it has more or less been common knowledge in Ottawa that Ignatieff wanted no part of a joint government with the NDP.

Yet he said what he said last December. And, whatever he says now, the unfortunate example of his predecessor stands. Dion, too, was categorical about refusing to contemplate a joint government with the NDP—until it became his only route to power. “We cannot have a coalition,” Dion said during last year’s campaign, “with a party that has a platform that would be damaging for the economy. Period.” That period didn’t take long to turn into a comma.

By now I can hear the bellowing from certain quarters: but what’s wrong with a coalition government? The answer is: often, nothing. It’s actually true that in our system of government, any grouping of MPs that enjoys the support of a majority of their peers can form the government. But the details matter. Last year the details included the Liberal leader’s previous refusal (“Period.”) to consider such a thing. And the fact that he could not govern without the explicit support of almost the entire Bloc Québécois caucus. And his previous acceptance, for more than a month after the 2008 election, of his party’s defeat.

As a result the coalition experiment was a searing shock to Canada’s politics, one that divided the electorate deeply—and not to Harper’s disadvantage. He noticed. He will proceed according to what he learned. He seems to be the only one.