Why no one is in a hurry to lead the Liberals 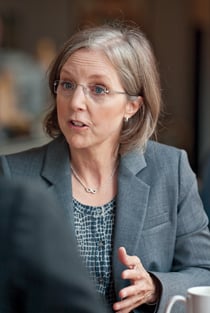 And now we bring you exciting news from the Liberal Party of Canada, where—no, wait! Come back!

The latest news from the Liberals is that Deborah Coyne has entered the race to become, more or less, depending on definitions, the party’s sixth national leader in a decade. (I never know how to count Bill Graham.) This is an exciting development if you’re the sort of person who wishes a conversation about politics were about any other conceivable topic, just, please, not politics, because it’s pretty easy to segue from talking about Deborah Coyne to talking about how Pierre Trudeau was the father of her daughter.

Bam! Suddenly the Liberal Party is about 14 times as interesting as it was a few minutes ago. You can measure this. There are instruments to measure such things.

Coyne’s arrival in the Liberal leadership contest is encouraging for two reasons. First, because while I have already described it as a “race” and a “contest,” so far it is neither. If it were a race or a contest, it would have speed and competition. But the Liberal party executive has decided the party won’t choose a leader until the spring of 2013, so there is no speed. And while there are other candidates, they are not yet titans of Canadian public life. The declared candidates include Shane Geschiere, David Merner and Jonathan Mousley. If you ask me for more information about these gentlemen, I will be obliged to tell you Pierre Trudeau was the father of Deborah Coyne’s daughter.

Coyne is usually described as a “Toronto lawyer and policy consultant.” She is the cousin of our former colleague Andrew Coyne, who sends his regards. She was famous 20 years ago for—well, besides that, she was famous for joining the informal cabal of central government enthusiasts and Quebec special-status skeptics who came together to defeat the Meech Lake Accord. On the weekend that the three-year deadline for ratifying those proposed constitutional amendments passed and the whole deal died, Jean Chrétien hugged Newfoundland premier Clyde Wells on the floor of the Liberal convention in Calgary. It just seemed like a time when Liberals were reaching out in so many ways.

On her website Coyne has a video setting out “a bold vision for Canada.” This includes a carbon tax, as the Liberals appear to have decided to propose one of those in every second election. She’s already told my colleague John Geddes she’d want revenues from the tax to go back to the provinces where they were raised. So the carbon tax wouldn’t leave a federal government any further ahead. A Prime Minister Deborah Coyne would need some other mechanism for meeting what she calls “a huge national commitment to raise funds—the billions and billions of dollars that we need—to fix the crumbling infrastructure and to expand public transit.”

The Conservatives, then, would greet a Coyne-led Liberal party by pointing out that she wants the “permanent tax on everything” they defeated when they ran against Stéphane Dion in 2008, plus some other tax of comparable magnitude. But of course many voters support the notion of a government that wants to do great things even if it means charging taxpayers a higher price. These days, the most common term for such voters is “New Democrats.”

Like every Liberal, Coyne decries a “polarization along an outdated ideological spectrum” that forces voters to choose between Stephen Harper’s Conservatives and Thomas Mulcair’s New Democrats. But the Liberals are having a lousy year because most Canadians have no problem with that polarization. The ones who say they will vote Conservative are not, by and large, wishing for some less conservative Conservative party they could support instead. And what may be more surprising is that the voters who say they’ll support the NDP don’t seem to be reluctant, mournful or hamstrung about it.

The Liberals used to complain about national-unity crises and the rise of Quebec separatism while using them—in 1968, 1980 and 1993— to win power. Today their brightest hope is for more “polarization along an outdated ideological spectrum” rather than the suffocating convergence that leaves the beleaguered party so little room to breathe.

But Coyne at least has the right instinct, the same one that made her briefly a figure of national attention during the Meech skirmishes of 1989 and 1990: she is willing to stand up for something she believes in. What she has in common with Shane Geschiere, David Merner and Jonathan Mousley, whoever the hell they are, is a refusal to let the Liberal Party go down without a fight.

They could use some company. The presence of Coyne and Justin Trudeau at leadership debates would be a little weird, but they’d get over it soon enough. Marc Garneau, the navy officer, engineer and astronaut, would be a formidable candidate. These relative heavyweights are in no hurry to commit, and they don’t need to hurry, because their party has set an insanely lackadaisical schedule for choosing its next leader. But in due time, potential leaders should not be shy about getting into the race. The Liberals are not doomed to disappear, but neither are they required by any law of the universe to keep thriving. It’s all up to the Liberals now.