Why Rob Ford shouldn’t clean up his act

The mayor's rehabilitation would be good for Toronto, but would it really be good for Ford? 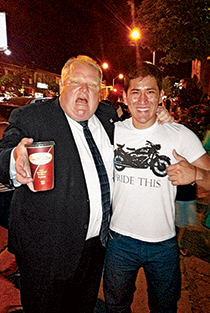 Something’s gotta give. Or maybe it doesn’t. Toronto Mayor Rob Ford’s political career could be the death knell of that cliché. Each time his detractors open the morning paper, read the latest Ford takedown and laugh, Rob Ford, presumably, laughs harder. He’s been the subject of every breed of scandal short of Weinergate, yet he remains as much the mayor of our country’s biggest city as he was the day his term began in 2010. He is, says Darryl Wolk, a long-time supporter and former volunteer on the 2010 Ford election campaign, “sort of Teflon.” He makes you wonder, says Wolk, “Is there such a thing as bad publicity?”

Or has all the Rob Ford publicity following the anti-climactic crack cocaine scandal, in which the alleged incriminating video never surfaced, made us too weary to protest? If that didn’t bring him down, after all, what can? Rob Ford’s success, it seems, is based on the presumption that the ugly truth is superior to a pleasant lie. Ford is nothing if not raw. Unlike his far slicker political contemporaries, most of whom can’t deliver a single, unpolished human sentiment, the Toronto mayor mumbles his way through awkwardly written press releases like a reluctant fourth grader at show and tell. Ford is so raw, he stains his shirt, flips off self-righteous mom-drivers, abandons his weight loss goals and, most recently—attends downtown street festivals seemingly intoxicated. That’s right: August has given Toronto another Ford fumble to bemoan and secretly relish. On Friday, Aug. 9, the mayor was caught on camera slurring his words, moving slowly down an east-end Toronto street at Taste of the Danforth, the city’s annual Greek food and culture festival. On his talk-radio show a few days later, Ford came to his own defence, saying he had had a “few beers” and “let his hair down.” His critics didn’t buy it, of course, and so began their usual refrain about the embarrassment that is our mayor.

This revelation—coupled with a recent Globe and Mail story about Ford having tried to visited a childhood friend, Bruno Bellissimo, at a west-end Toronto jail in March (apparently, a man with a “history of drug-related activity”)—is even more reason for him to step down or get help, according to his haters. Toronto City Councillor Jaye Robinson told CBC’s Metro Morning after the Danforth incident that, if Ford “wants to be the mayor of this great city, he needs to take a leave of absence and get help. It’s in the best interest for the mayor and it’s in the best interest for Toronto.” Sounds familiar, doesn’t it? It’s the same faux sympathy every Ford-wary politician digs up every time the mayor’s done something uncouth. And it’s getting tired. We know they don’t really care, but now, more than ever, we know they’re wrong.

Ford’s rehabilitation would be good for Toronto, yes, but would it really be good for Rob Ford? His health may improve if he curtails his alleged bouts of public intoxication, but will his political career? Or has he already assumed, as Wolk suggests, the Teflon status of some of the more lucid big shots before him? (Bill Clinton and Ronald Reagan were both, at one time, compared to Teflon for their abilities to prevail over controversy.) Ford’s approval rating is still almost identically where it was post-crack scandal (and it actually rose in the weeks following the original Gawker and Toronto Star stories). Each passing faux pas, it seems, is beginning to work in his favour. Some chalk it up to a levity most of us will never achieve: not caring what other people think. “He is gloriously un-self-conscious in a hyper-self-conscious world,” a provincial Ontario Liberal staffer told me (she preferred not to be named.) Others give credit to simple name recognition, arguably the most important thing any politician can have. Flawed or not, Ford is one of the only municipal politicians many people could pick out of a lineup. (He is also, if we are to believe the allegations, the one most likely to actually appear in a lineup.)

This month, the mayor announced he is “obsessed” with cleaning up the city’s graffiti. He even established a partnership with a graffiti cleanup service that’s offering a 15 per cent discount for work on private property, and complimentary services to Toronto residents whose property has been defaced with images that are “hate- and violence-related.” “Everywhere there is graffiti,” he warned, “I will guarantee that we will be removing it.” This is especially interesting, because an impressive amount of Toronto graffiti is actually dedicated to His Truly. Ford’s red-faced caricature marks many an alley; there are graffiti artists all over the city who specialize in Rob Ford-themed art. Knowing the mayor’s penchant for cleaning up graffiti himself (photos abound of the mayor gleefully wiping it off city walls), it’s quite possible that, sometime soon, we’ll see him expunging his own cartoonish face from the walls of Toronto’s buildings. Ford is literally at war with his own tainted image. But it’s a war he may want to reconsider, because if this season’s polls are any indication, it could be the best thing he has going for him.