On royal etiquette and mourning protocol 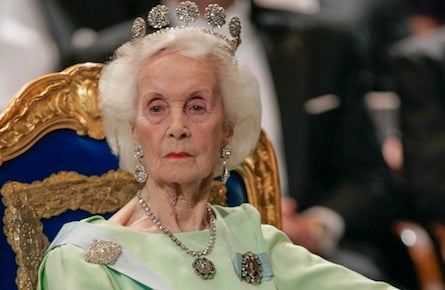 Royalty have a lot of fussy rules governing etiquette—for example they should start a conversation, not the person being introduced to them—but there are times when having those traditions makes sense. One is that royal families always travel with black clothes in their luggage, just in case someone dies and they have to show respect by wearing the colour of mourning.

When Diana’s father died while the Waleses were on a skiing trip to the Alps, they hastily dug out their black clothes and then got on a plane back for England. And when the Queen’s father died while she and Philip were looking at wild animals in Kenya–far away from their base and their luggage–the accompanying cameramen stood on the road, with their cameras down at their sides, to show they were respecting her privacy and wouldn’t take a picture until the royals were wearing black. Even Downton Abbey has an episode of mourning this season.

And it isn’t just royals who observe such rituals, it’s part of diplomatic life for every head of state. You either pack mourning wear or be prepared to quickly buy something suitable.

Yet the Turkish president and his wife clearly didn’t get a briefing on the topic. That’s really the only explanation for what happened this week in Sweden. On Sunday, March 10, Princess Lilian, 97, died and the nation went into mourning. So it wasn’t a surprise that the king, queen and rest of the family wore black when they greeted the president of Turkey, Abdullah Gül and his wife, Hayrünnisa, at the start of their state visit on Monday.

What is surprising is that Hayrünnisa Gul, a religiously conservative (and ultra fashionable) woman wore such a bright blue outfit. But perhaps she was travelling when word of the death reached her. Then, that evening at a glittering royal dinner, she again wore a dramatic dress—a shiny silver number complete with crystals—while the royals were all in black, though with glittery diamonds and tiaras since anything “white” is also acceptable. Crown Princess Victoria wore a broach given by Lilian. Even if she didn’t have black clothes, she could have pulled out her most subdued outfit from her luggage.

It must have taken a while for word to reach them that they should, perhaps, be a bit more respectful. On day 2 she wore a black outfit but a red head scarf. On day 3, as they left, the Turkish couple were finally in head-to-toe dark clothes.

Princess Lilian’s funeral is on Saturday. Don’t expect to see any bright colours.