Via The Comics Curmudgeon, here is the second and last panel of today’s Mary Worth: 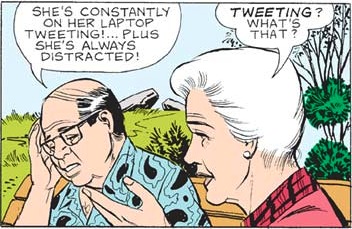 That’s it for Twitter, then. It’s not just that once a legacy strip acknowledges the existence of a fad, it means the fad is almost over. It’s also that once Mary knows what Twitter is, it doesn’t stand a chance. She will not stop until a) The evil, newsprint-threatening technology is dead and buried next to her “mysteriously” dead husband, or b) Twitter is married off and happy like a respectable technology is supposed to be. One way or another, once Mary’s meddling begins, nothing is safe, and now she’s got her sights set on Twitter. You’re next, Netflix.