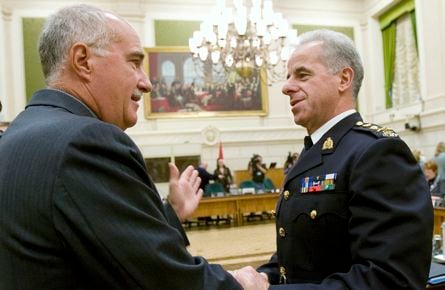 Garry Breitkreuz says the language in yesterday’s embarrassing press release “is not me.” Well, gee, Garry, it may not have been you, but as a longtime observer of your career I thought it was an excellent likeness. If you ask me, you picked a pretty bad moment to disavow the self-portrait.

Joan Bryden’s wire story for CP says that Breitkreuz’s statement “compared Canadian police chiefs to a cult and urged Liberals to beat their leader, Michael Ignatieff, ‘black and blue’.” On count one of the indictment, Breitkreuz must be judged not guilty. He actually compared the opposition in the Commons to a cult, and said it was being “led by organizations of police chiefs”—i.e., political advocacy groups that claim to represent police chiefs, and that have a strong interest in the naïve citizen (or the naïve reporter) confusing them with the police qua police.

Breitkreuz has always worked hard to emphasize this distinction, and it was highlighted rather intensely a year ago when John Jones, an ethics advisor to the Canadian Association of Chiefs of Police, quit because of the association’s incorrigible addiction to questionable corporate donations. As Christie Blatchford wrote in the Globe at the time:

Dr. Jones and the members of the ethics committee were in Montreal in August for two days of meetings around the CACP’s annual conference when they learned about Taser’s sponsorship and that of others, including a joint Bell Mobility-CGI Group-Techna donation of $115,000, which went toward the purchase of 1,000 tickets at $215 each to a Celine Dion concert on Aug. 25.

CGI Group Inc. is a major, long-term firearms-registry contractor. In the odious press release, Breitkreuz, or his evil twin, asked “Could it be that CACP support for the registry is financially motivated?” Why the pussyfooting? Seems like he could have just said flat-out that when it comes to the gun registry, the CACP has an obvious conflict of interest and cannot be considered an uncompromised source of policy advice.

As for the charge that Evil Garry called for Ignatieff to be beaten…well, the world will always have its thick-as-a-plank literalists, won’t it? The press release didn’t even refer explicitly to a beating, but said that “[Ignatieff’s] true colours are showing, and if his caucus has any integrity, those colours should be black and blue.” If Breitkreuz thinks that this rough-and-tumble metaphor is an offence worth apologizing for, fine; standards, after all, are ever-evolving in this area.

His real problem is that his rather careful statement about the CACP’s conflict of interest would have been easy for the opposition to strip of its context and twist into an anti-cop sound bite. In the wild-and-woolly Reform days, when the party’s base consisted of half-anarchist and heavily-armed rural Westerners, this kind of tension was not a major problem. Old Reformers readily recognize a implicit distinction between lawfulness and regimentation, between policing and the police state. But this philosophical razor is naturally a little blunter in a federal party that is trying to straddle multiple regions and political traditions. Reform’s passion for old-fashioned, demotic criminal justice seems to have been diverted into the task of elevating the police into a species of untouchable philosopher-king. And in the Ignatieff era, this is a contest in which the Liberals no longer have any compunctions about competing.

That puts someone like Breitkreuz in an awkward position, since he is dedicated to the destruction of a gun-registry program that many police really might like—not because it is in the public interest, but because it gives them another pretext for arrests, searches, and horse-trading with the bad guys. The registry self-evidently gives the police more power, but it is difficult to imagine that it protects anyone from personal harm. You can build all the databases you like, but no properly trained officer of the law will ever enter a premises or stop a suspect without accounting for the possibility of a weapon coming into play. If one were to take the CACP at its word, and accept that the registry with all its inaccuracies is routinely used to “check for the presence of firearms” in homes being visited by police, one would be forced to consider the possibility that the damn thing is nothing but a digital Petri dish of overconfidence and carelessness—well worth consigning to oblivion in the name of safety and common sense alone.