I know these are tough times. The revelation of the Verne Troyer sex tape has shocked us all. Not quite as much as it has intrigued us all vis-à-vis the “mechanics” of it all and whether you can hear Mike Myers in the background making tiny-penis jokes, but still – we’re all pretty shocked.

And yet duty calls. 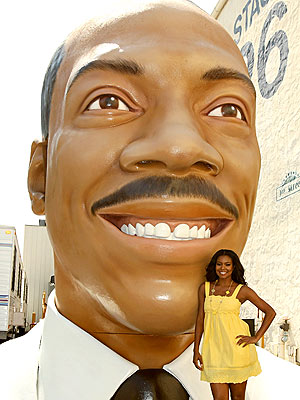 Anyhoo, to promote the movie – which is called Meet Dave – the studio has sent Eddie Muphy’s Gigantic Oversized Novelty Head on a cross-county tour, which will culminate in a three-day stint in Times Square over the July 4 holiday. At the same time, Eddie Murphy’s Gigantic Oversized Nether Regions are currently in the San Fernando Valley, shooting a three-way with Jenna Jameson and the robot from Short Circuit.

Your mission – should you a) choose to accept it, and b) not be too upset that I had the gall to steal the obvious Where’s His Huge Wang? joke – is to write a caption for this photograph in the comments section below. For the record, the woman in the picture is actress Gabrielle Union, who is not Eddie Murphy and therefore of no consequence whatsoever to Eddie Murphy.

The winner of this week’s caption contest receives the now traditional gift of Something From My House. Last week it was two DVDs (they’re coming, Shannon – honest). The week before that it was, if memory serves, my plumber.

Here are some actual facts about Eddie Murphy’s head that may be of some assistance to you:

FILED UNDER: all egos to scale