your friday caption contest: the hilarity of bodily trauma 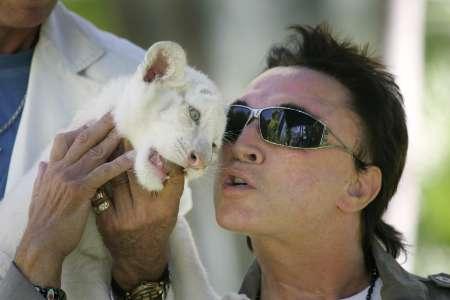 More specifically, it’s a photograph of famed Las Vegas illusionist, and World’s Most Famous “Guy Who Had It Coming,” Roy Horn. Completely specifically, it’s a photograph of Roy Horn nuzzling one of several six-week-old tiger cubs that will be “taking up residence” at Siegfried & Roy’s Secret Garden and Dolphin Habitat at the Mirage Hotel & Casino.

Wow, a Secret Garden AND a Dolphin Habitat?! When did Las Vegas get so staid? Back when the city was the first name in excess and opulence, this thing would have been at least a Secret Garden, Dolphin Habitat, Hooker Emporium, Pawn Shop For Human Souls & a Denny’s. But, fine, it’s got dolphins and tigers and crap. Whatever.

Point is: this is a heartwarming scene, isn’t it? On one hand, you’ve got the man who proved definitively that getting horribly mauled by a jungle beast could be hilarious after all. On the other, you’ve got the adorable baby tiger that will lift his spirits, heal his heart and, in approximately 18 months, finish the job.

FILED UNDER: liberace would have killed that tiger with his bare (well - bejeweled) hands