Why they marched: A Donna Ferrato photo essay

An estimated 500,000 people stormed Washington, D.C. on January 21, each one with a story, a motivation, a reason to join the ranks of the Women’s March. Iconic photographer Donna Ferrato—known for her coverage of domestic violence and New York City landscapes—took to the streets with writer Rosemary Westwood and captured these portraits of resistance.

By Donna Ferrato and Rosemary Westwood 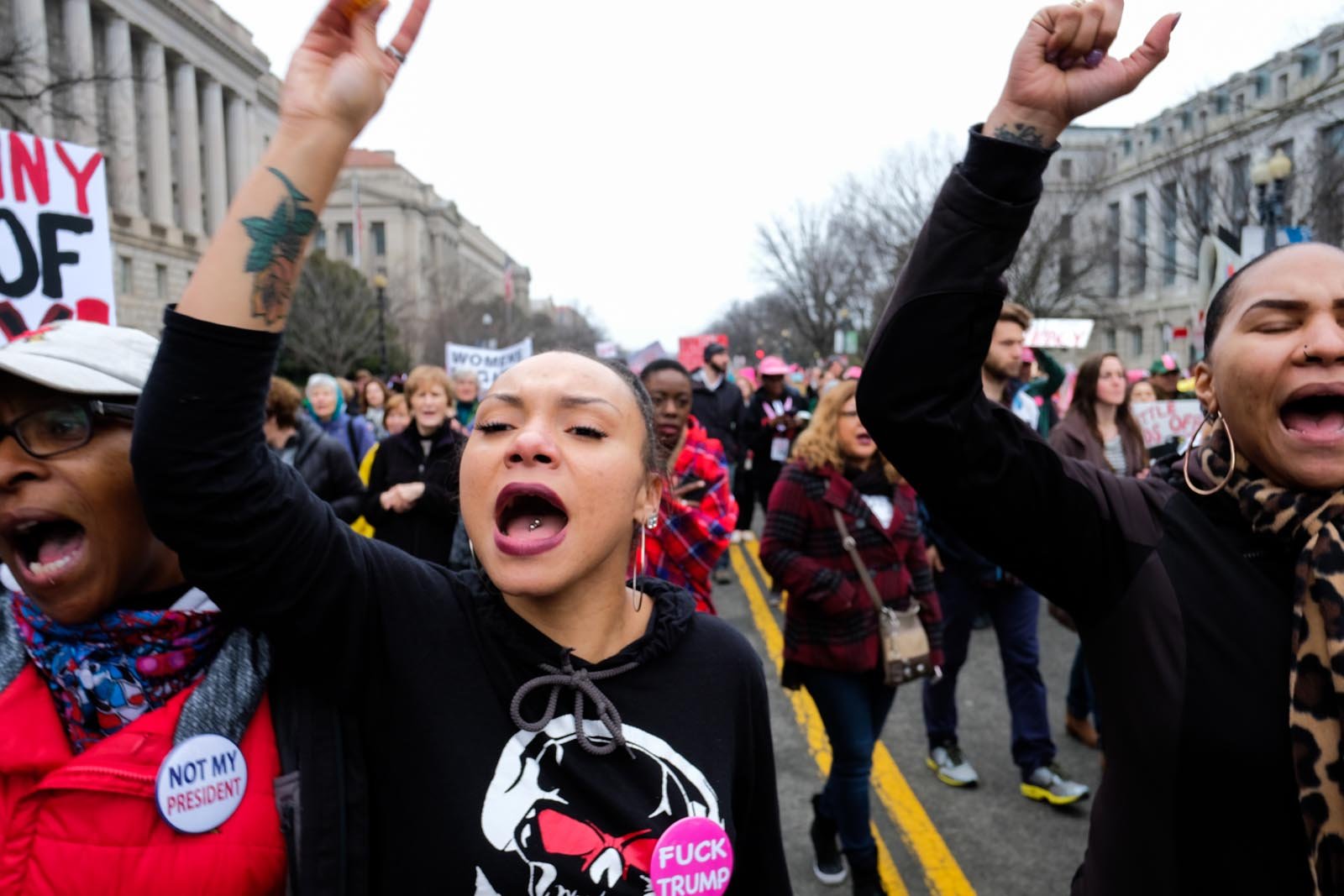 It’s crazy the turn our country has taken. Like my niece said, she’s got two younger ones. I think it’s important, because any injustice to any one of us is an injustice to all of us, no matter what our colours are, no matter what our beliefs are. We can still stand strong, and standing strong, we still can. So it was really important for us to be out here and show some solidarity. Bring it. He can’t take everything away from us.

I started to come because it’s part of history, but now, you know, today, I’ve got two daughters, I would never want them to come up in a world where they weren’t respected. I want to work extra hard, ten times harder, so my kids won’t have to. We have a president now that basically cares about himself, and you need to care about everybody. When you’re a president you’re supposed to think about your people, you make decisions for your people, you know what I’m saying? He is trying to push everybody out the border, build walls. That’s not what America is. America is to welcome all nationalities, all religions. We need to bring it back. And we’re gonna to struggle these next four years if people don’t come and they don’t protest and say what they believe in. I feel like today is making a stand that there are people out here that actually want better for our country. We live here. He can go to Italy or whatever he wants to to escape it. Me, I live on a minimum wage, I can’t escape this. This is my life.

It’s just a movement in this day and age, it’s a strong movement, and I want to be part of history. We have to stop the hate, the violence, we need to bring back love and respect, especially for women. 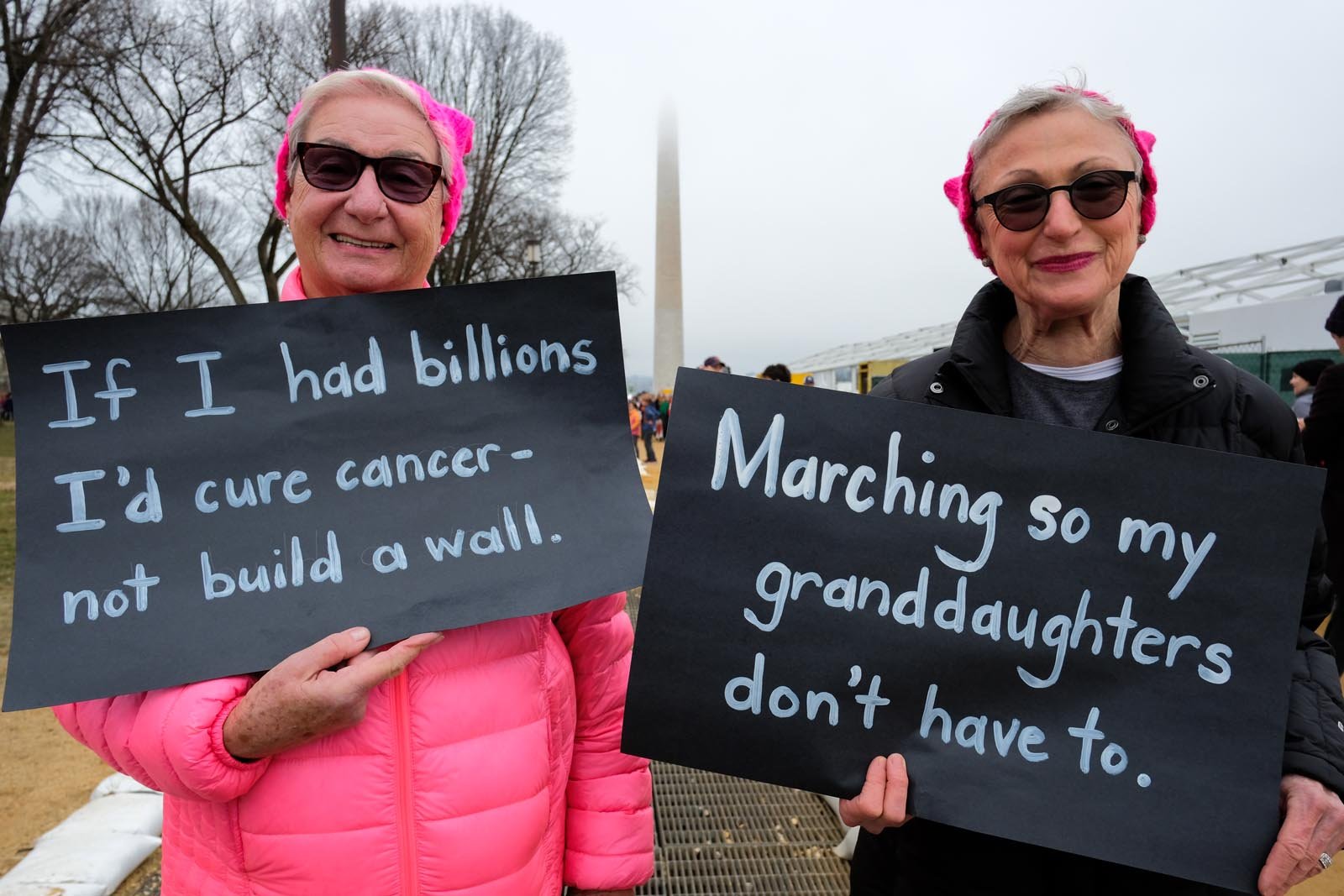 I think it’s great, for everybody to show force. I’ve marched for breast cancer, I’m a breast cancer survivor, but [otherwise] this is my first march. It’s awesome. 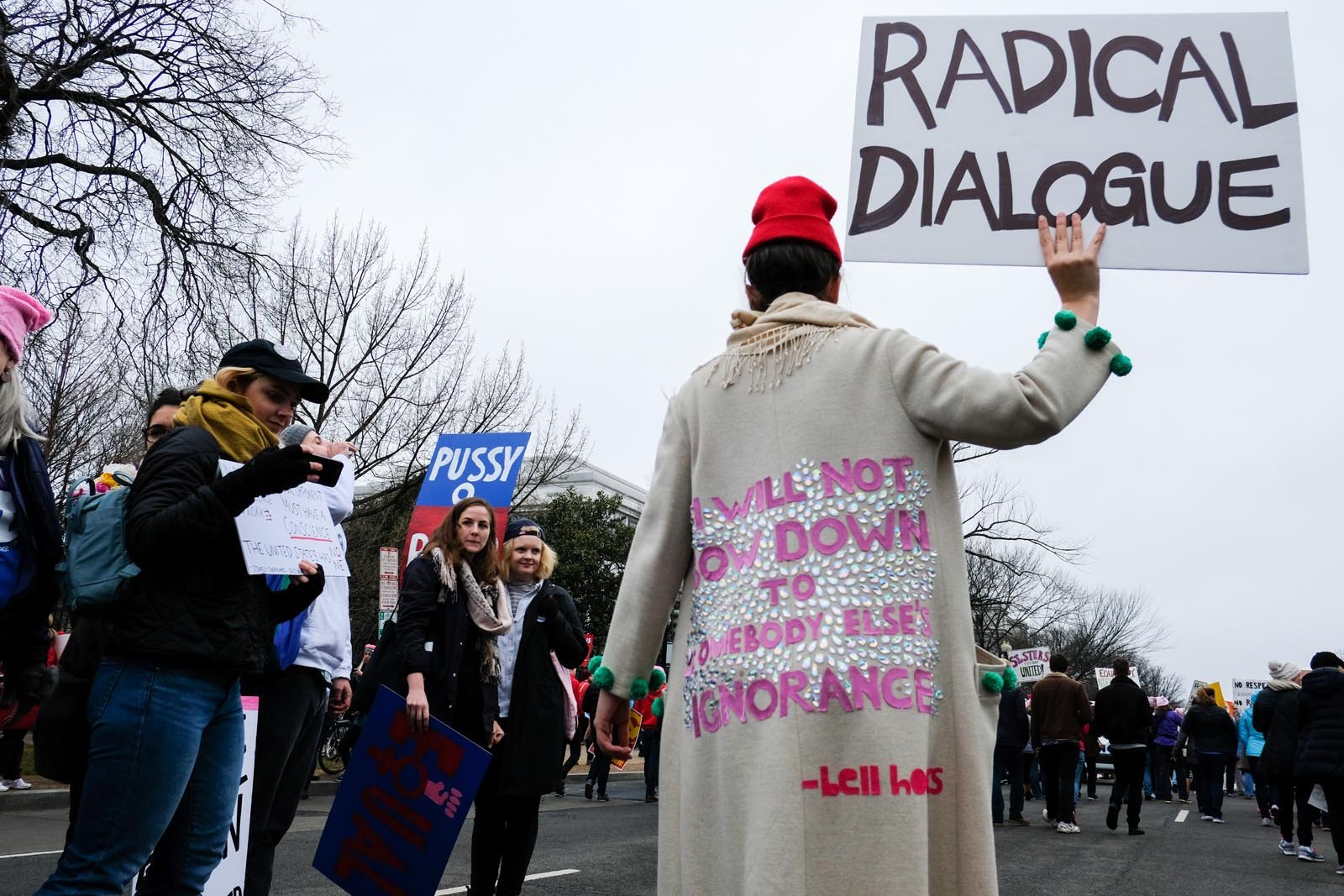 I came because this is bulls–t, and the only way that we can get things done is by people uprising and showing what true democracy is. [The quote on my jacket is from] a fantastic interview with Maya Angelou. I love the interview, anyway. It starts off with “Good morning, bell, how are you,” and it’s this dialogue between two women of colour, and bell hooks is a queer woman of colour. It’s been inspirational since college for me. 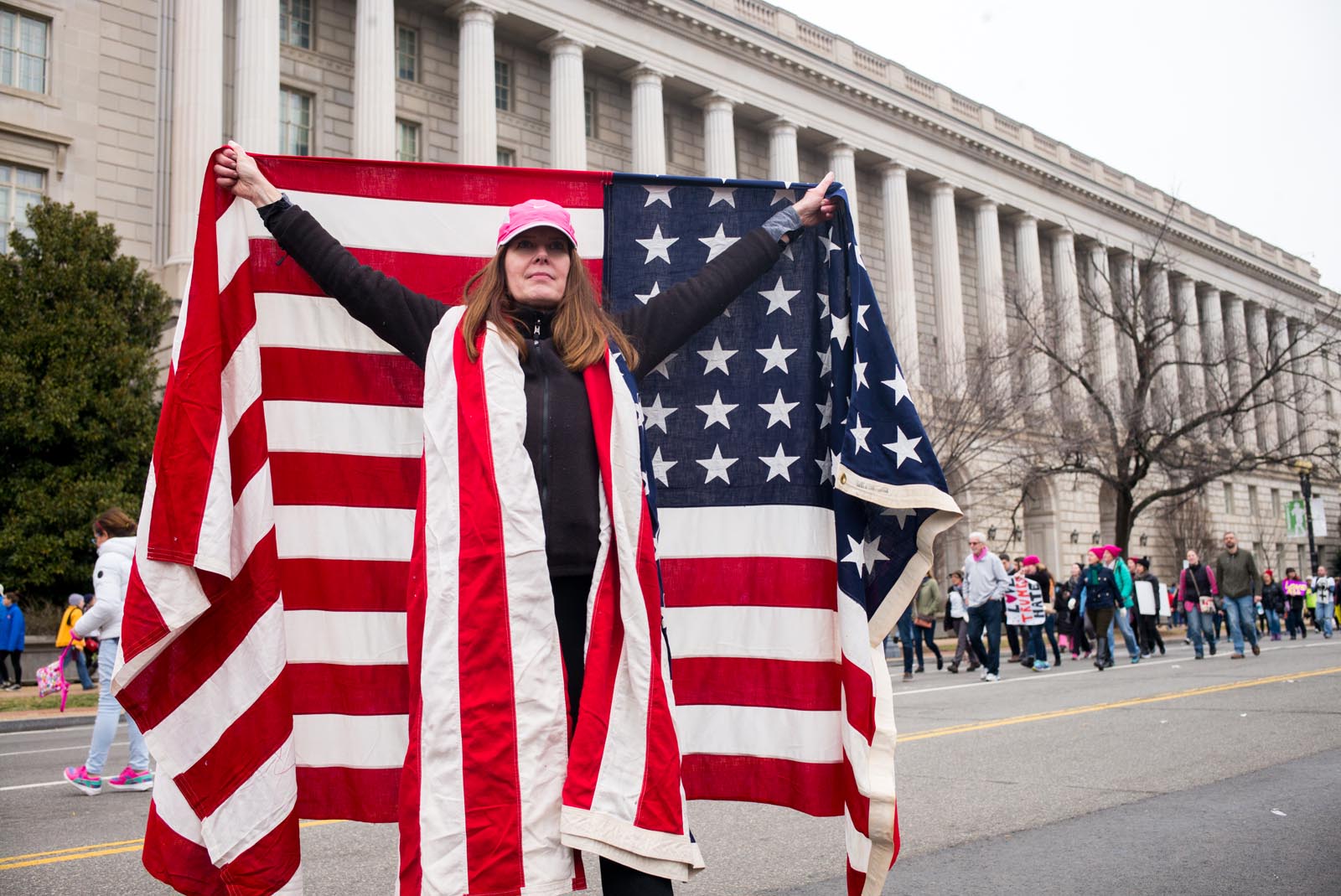 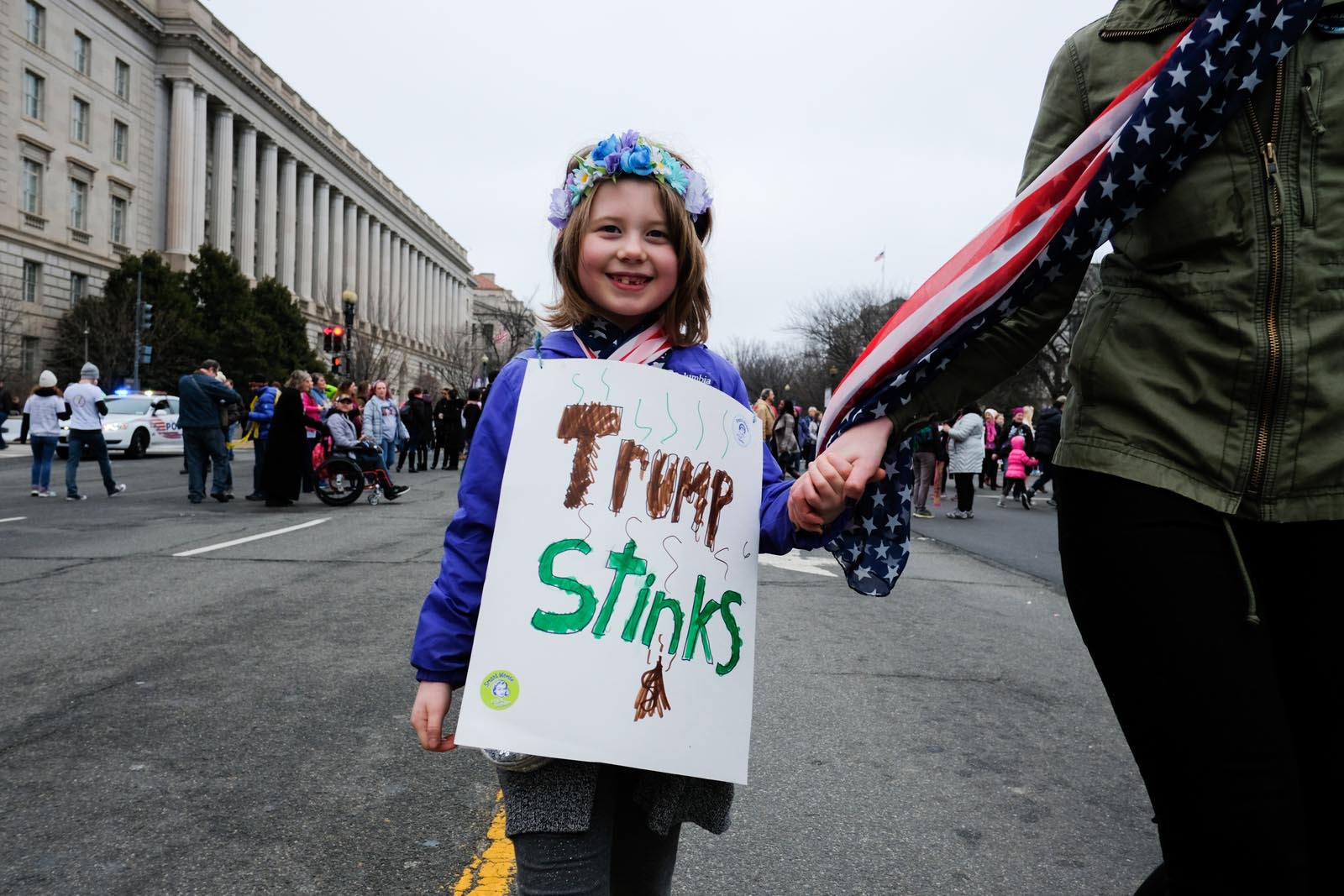 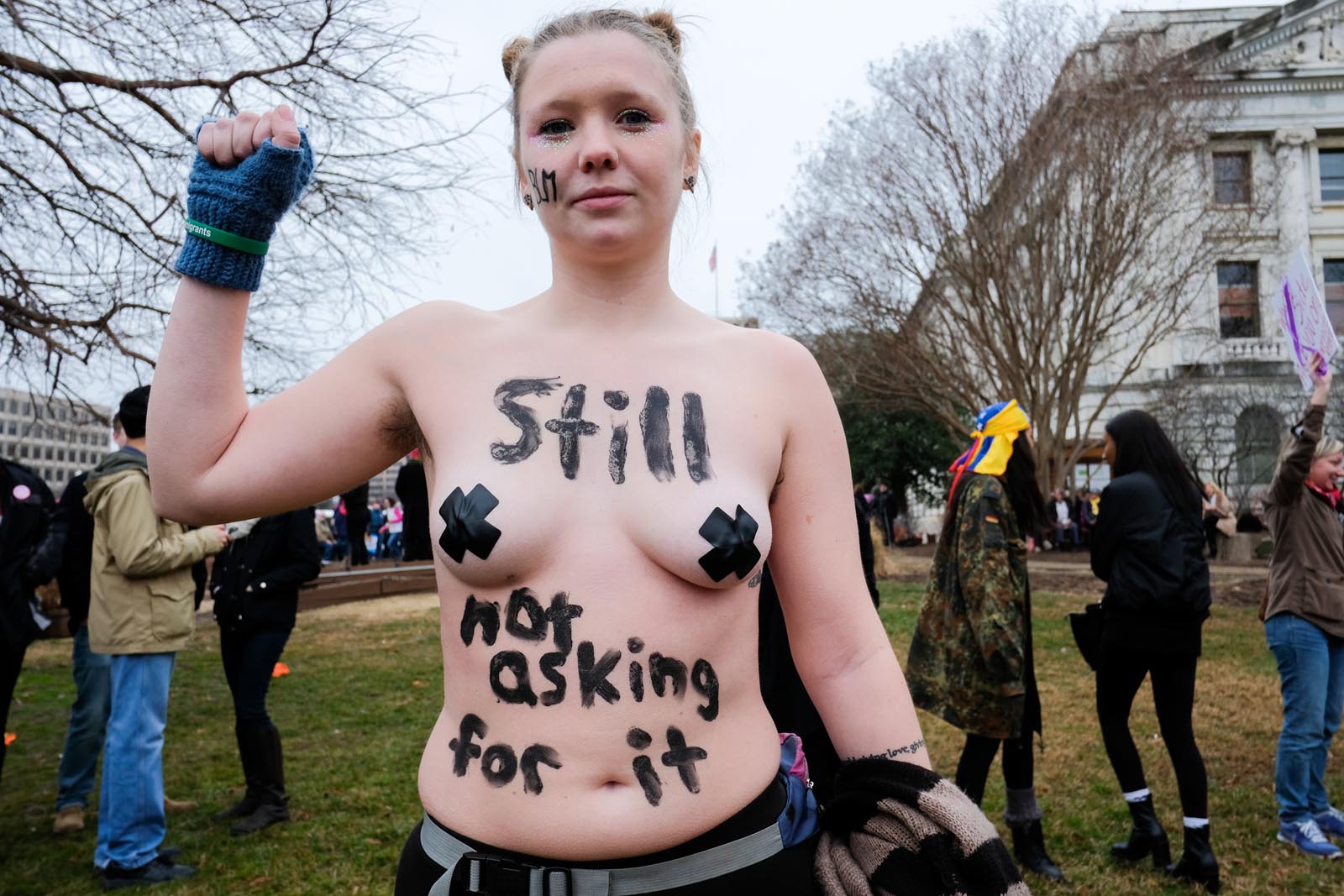 I’m here for everyone in this country. I’m here for women, I’m here for immigrants, I’m here for everyone of all colours. Against Trump, against the people he’s appointing, against the things he’s inciting people to do in our country. I’m from Minnesota so this doesn’t feel too [cold]. I wanted to make a statement. I hate slut shaming. Free the nipple! I would have gone all the way, but I don’t want to be arrested. I just feel very overwhelmed, and sometimes very depressed, and just making a bold statement is what is getting me through this right now. 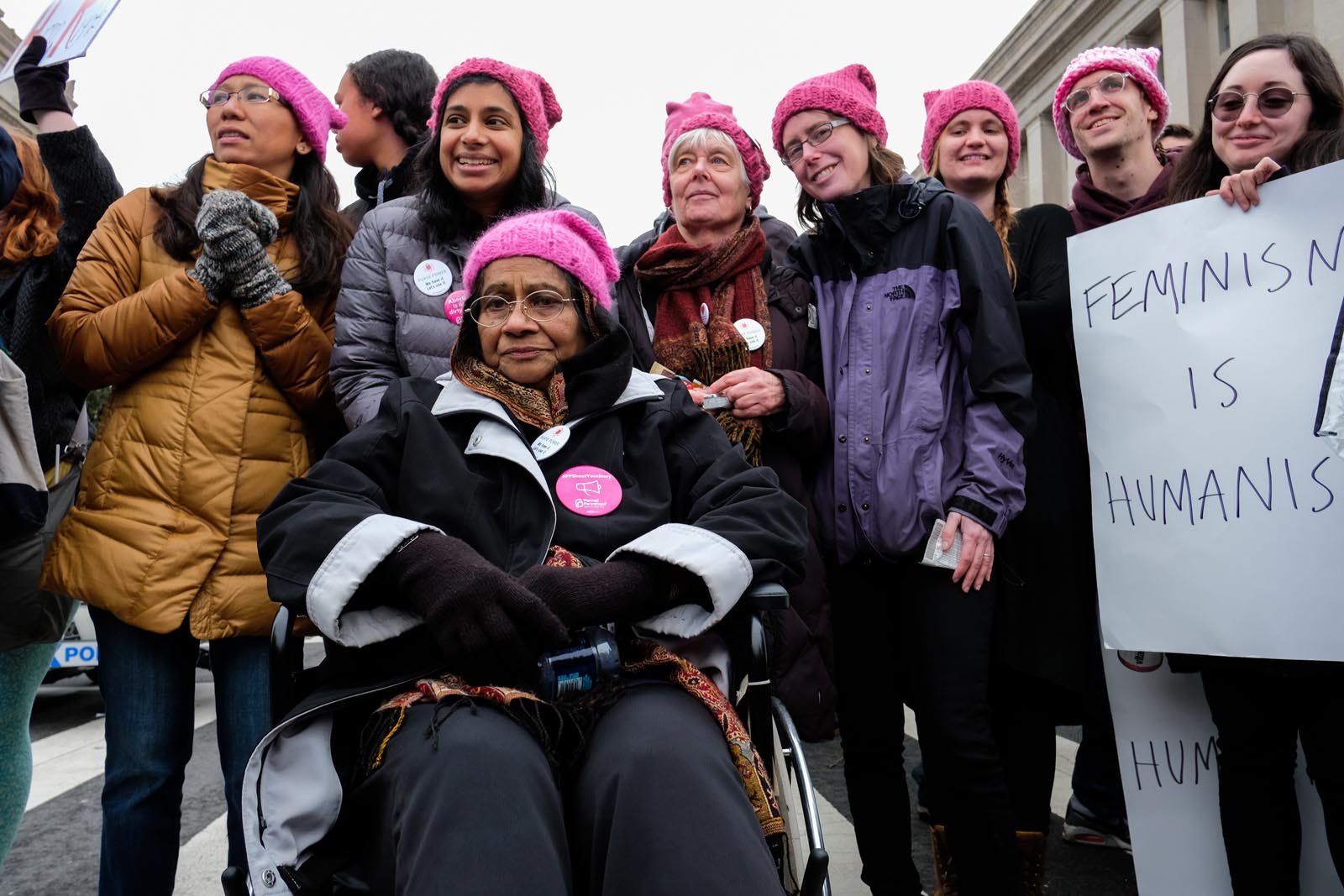 Democracy is gone. Now we are in a dictatorship. Fascism and corruption. Favouritism, nepotism, everyone is startled. We have to fight back. We cannot keep quiet. What is going on: racism, sexism, all that. Nothing good. 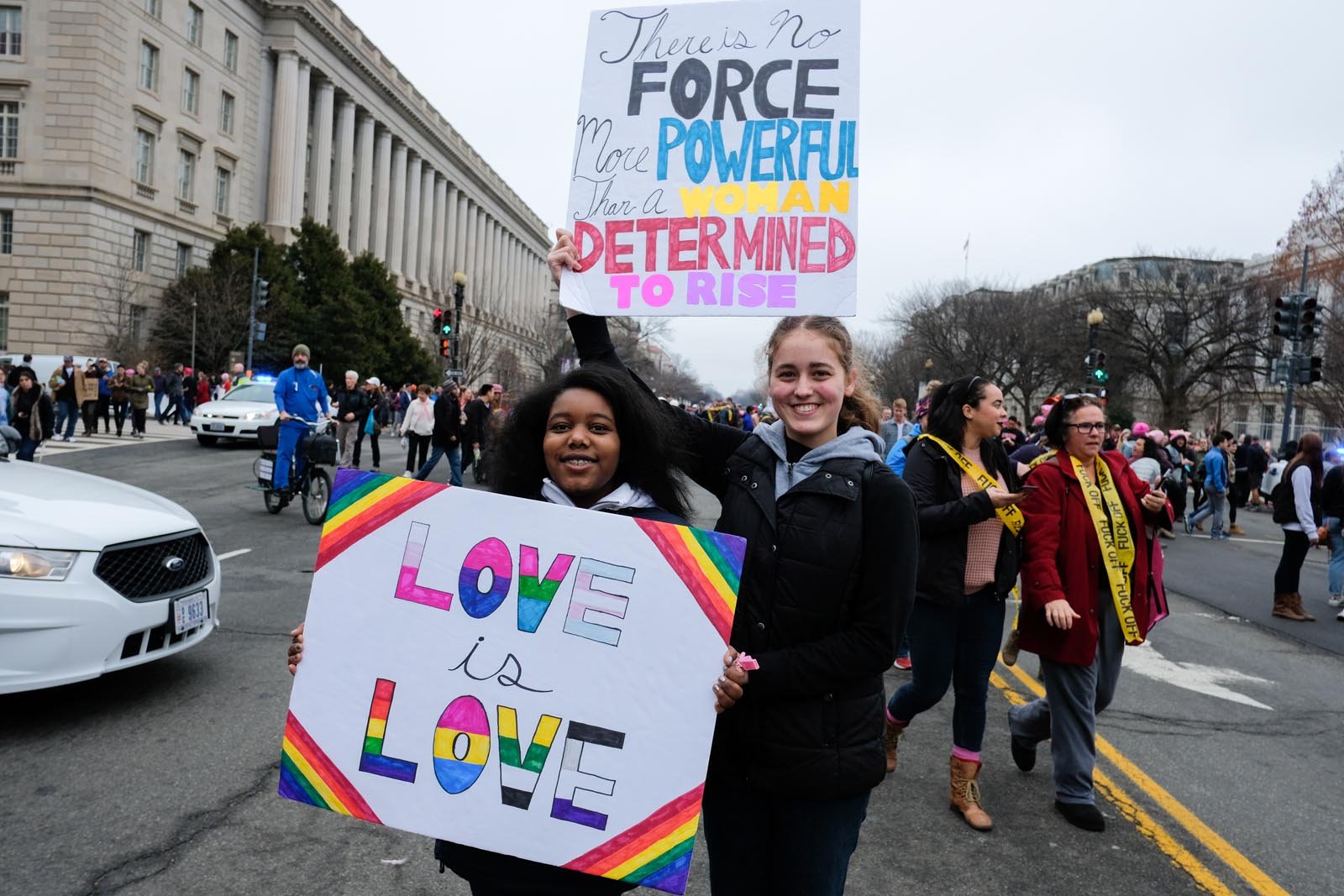 I’m marching because I support rights of women, LGBTQ, black people, all people of colour, Muslim, Jewish, Christian. And we need to fight for them, because soon, we might not have all the rights that we had before, we might get them restricted, and that’s not okay.

I want to fight for future generations. I’m fearing about what effect Trump has on little kids coming into the new world. 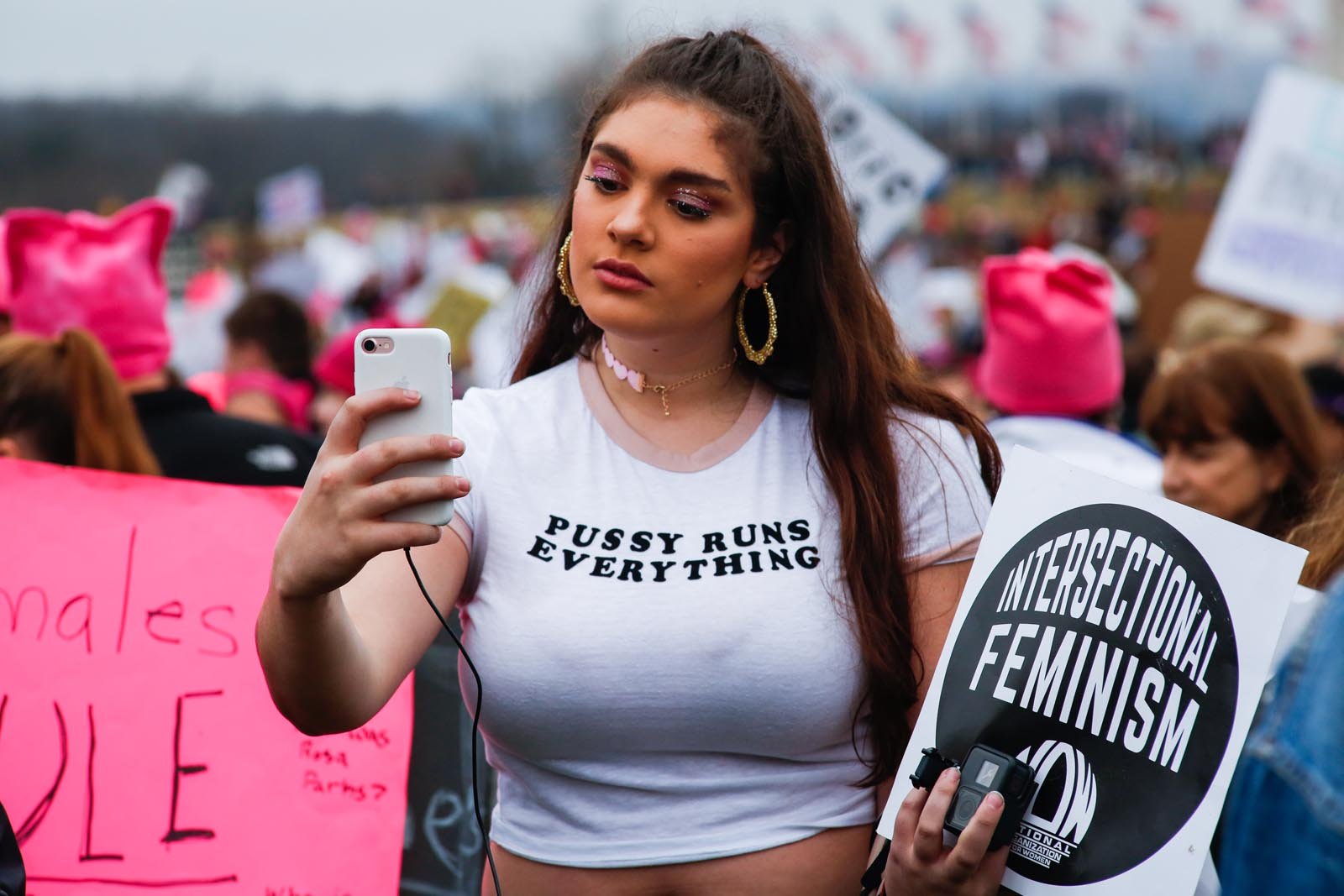 Maclean’s was not able to find this woman for later comment. 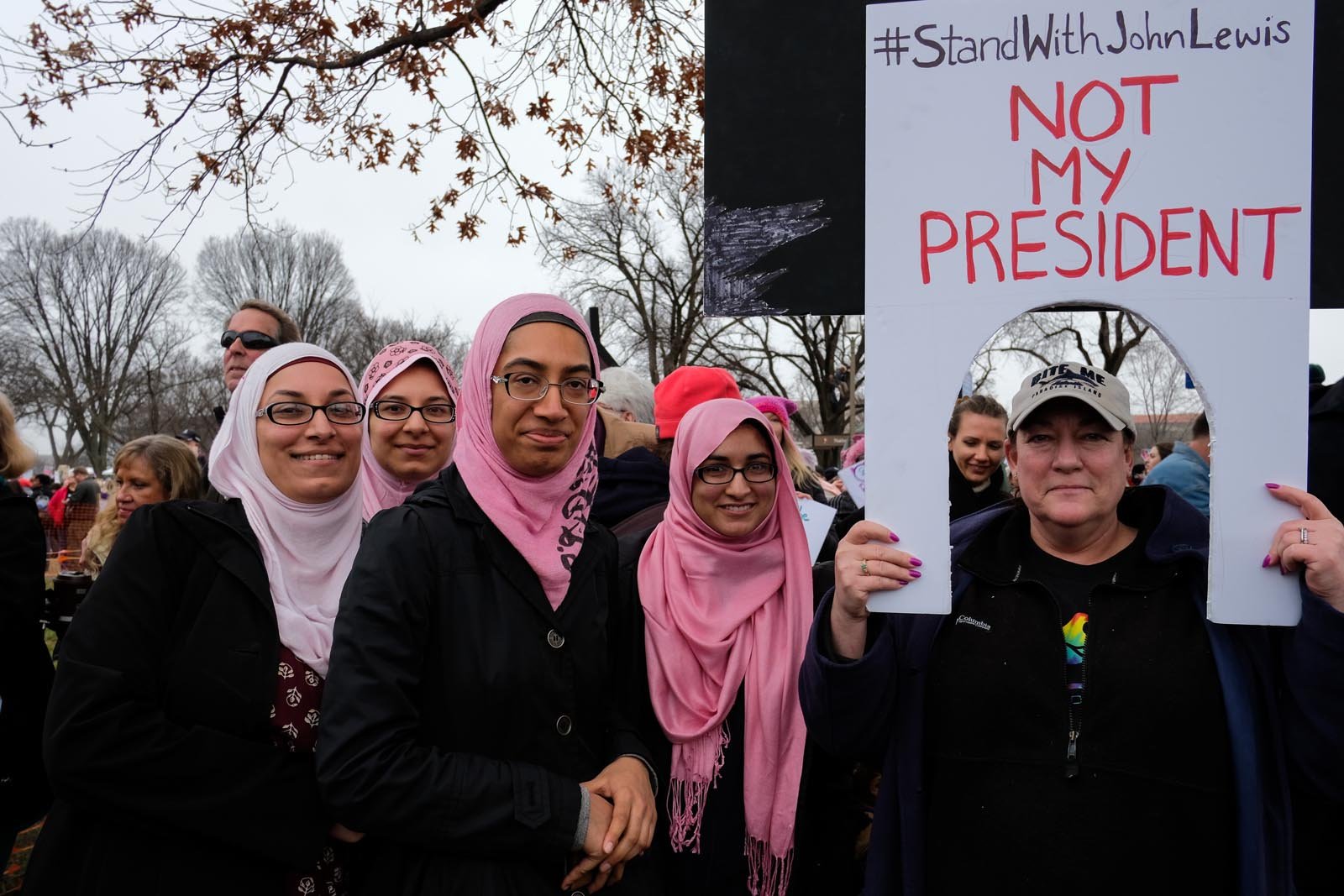 Really, I think it’s about all the nasty things Trump has said, and how disgusting and exclusive he’s been. I think it’s important to include all people, because America is a country that represents everyone, not just a select few people.

— Humera Sheikh, 25, from the D.C. area (second from right in picture)

What just happened is an abomination. It’s the worst thing that could have ever happened. Russia was involved in our election, no one seems to care, no one’s doing anything about it. John Lewis, an icon. John Lewis, the last person you would ever say is all talk and no action. It was just incredible. He’s incredible. And I stand with him, and not my president. 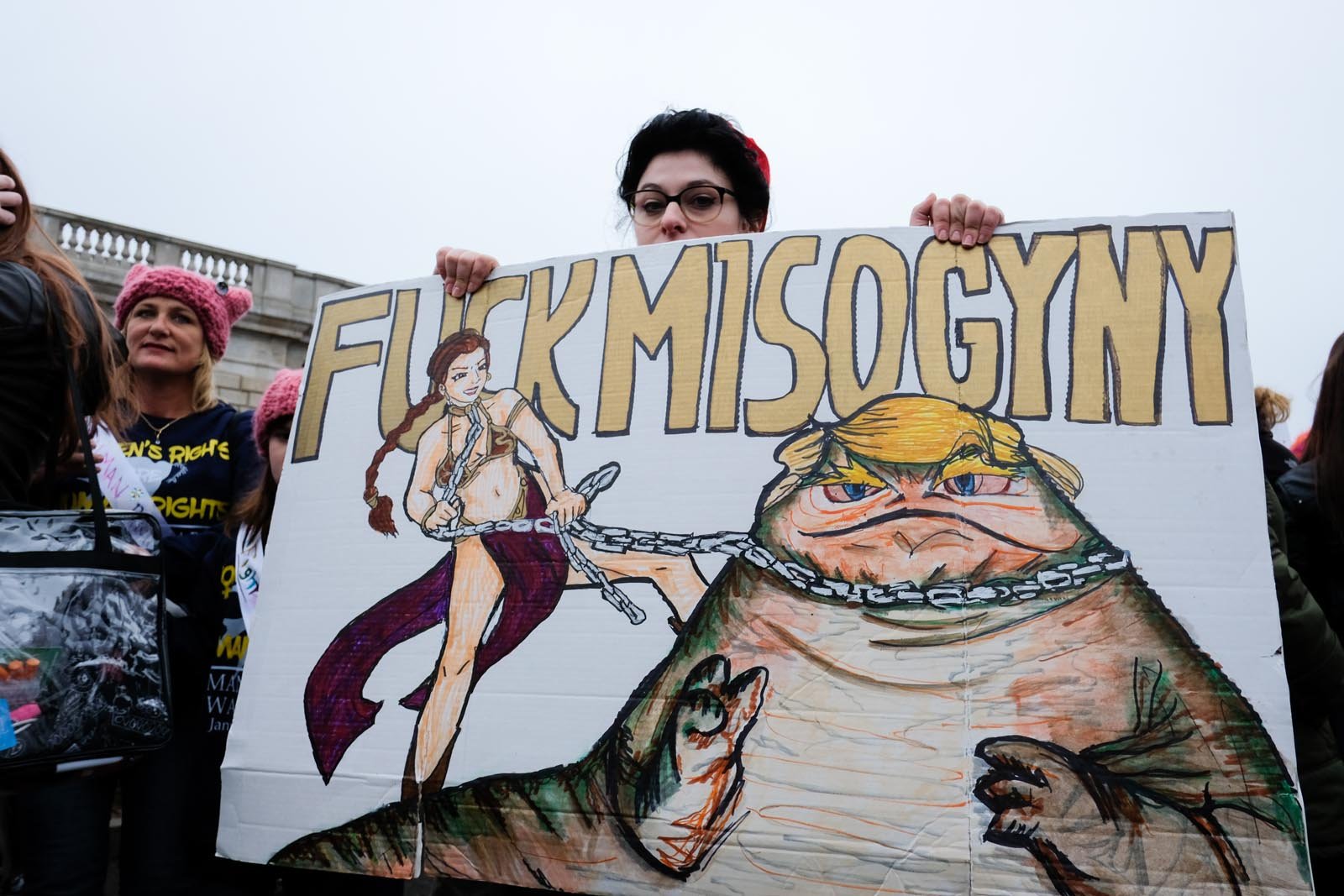 I’m here with my fellow Americans to protest a variety of issues that are all kind of falling under the umbrella that is the Trump presidency. I’m here for access to women’s health care and reproductive rights, fair wages between men and women. And I think both of those are correlated. I’m here for the Black Lives Matter movement. I’m here for everybody in New York City who is Asian, Black, Latino, East Indian, South Asian. I’m here for gun issues. I’m here for the environment. Global warming is a real issue. And I’m also here because our country shouldn’t be run by the Russian government. 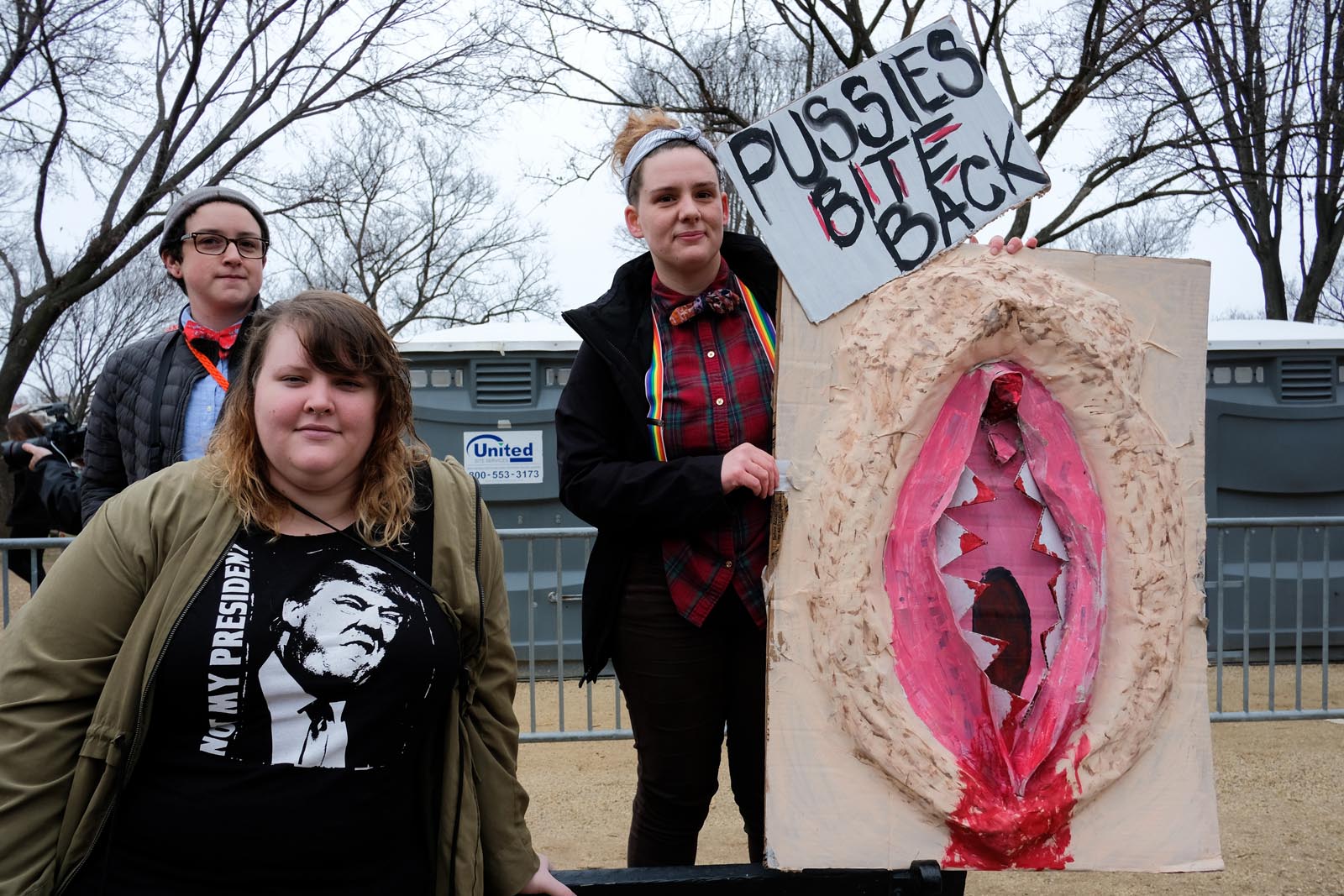 I’m just here to be with my fellow women, and show support and make our voices heard. Because things aren’t okay, and we need to keep speaking out. Donald Trump said he likes to grab them, so he needs to know you can’t just do that without getting hurt, or consequences. I took my inspiration from the movie Teeth. 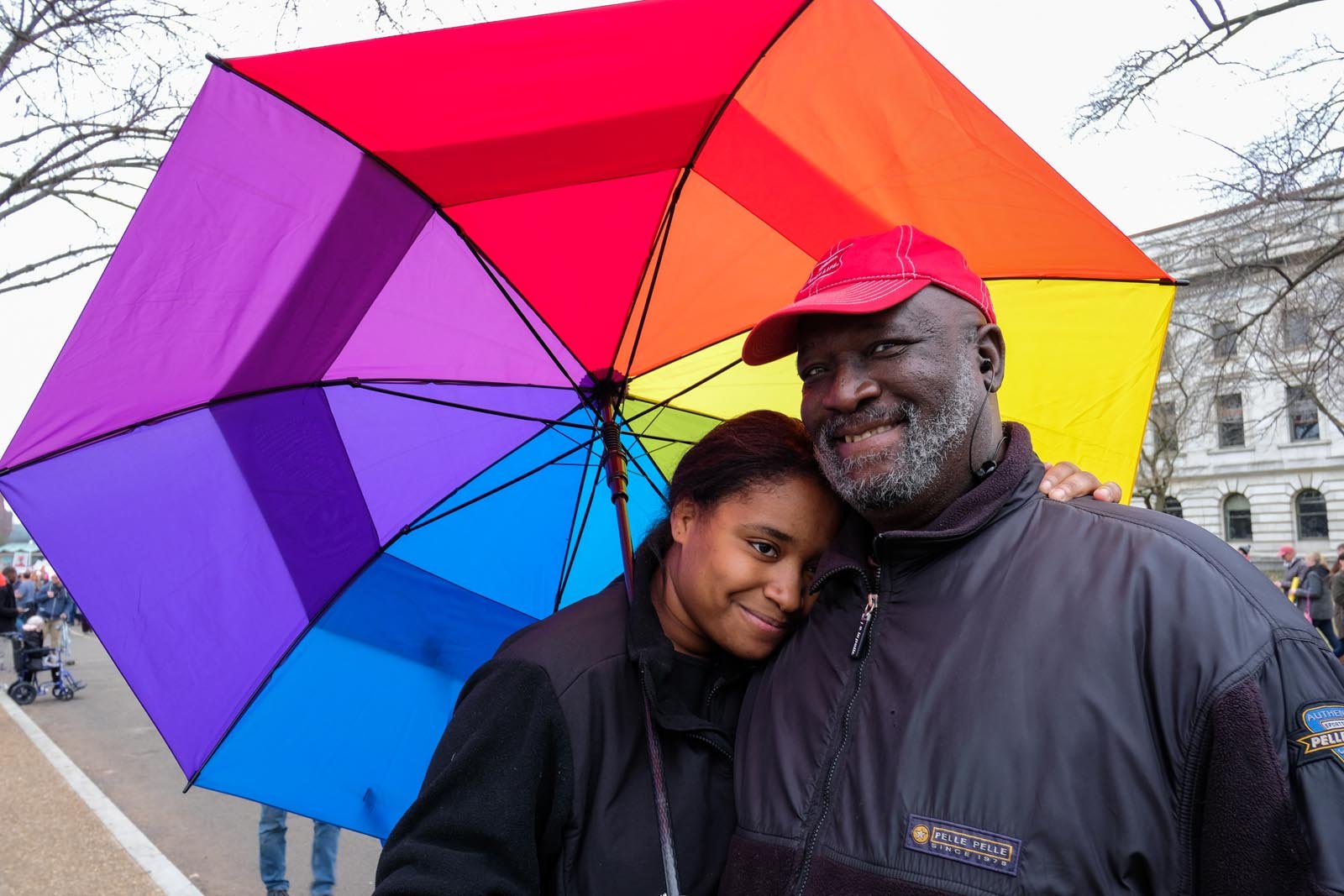 I’m here to support the women who are marching against Trump.

I’m here to support women, and show that we also have rights. Equality is for everyone. We are one. We are unity. 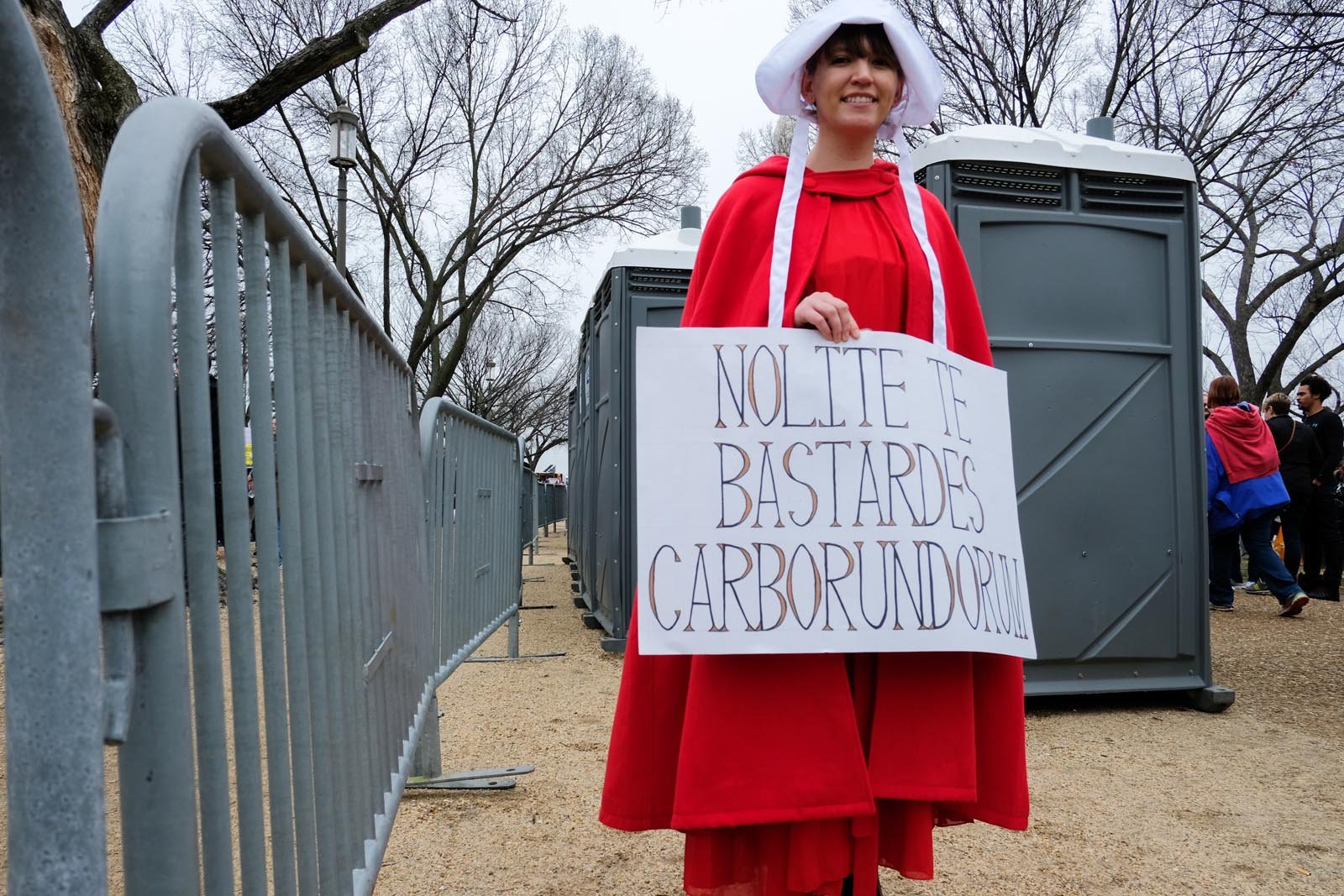 It says, “Don’t let the bastards grind you down.” It’s from The Handmaid’s Tale. I feel like the text is very relevant to what’s going on in our society right now. It’s about women, and the way society is treating them unfairly. I met up with my mom. I wanted to be a part of this. 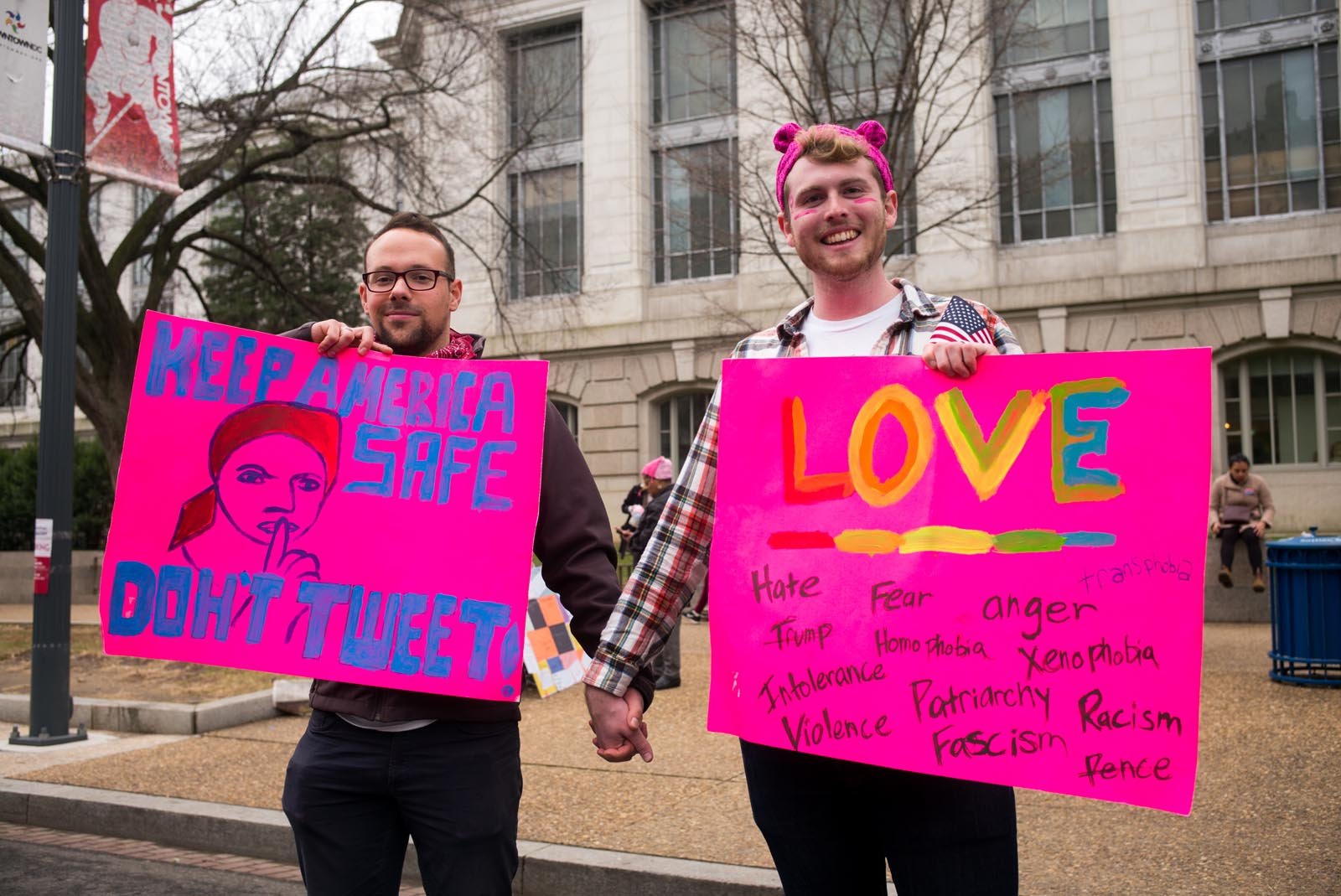 I’m here because some of the strongest people in my life are women and it would be an absolute travesty if any of their rights were taken away by such a foolish leader, that, honestly the majority of the country didn’t elect. I’m here to represent those women, and walk with them. 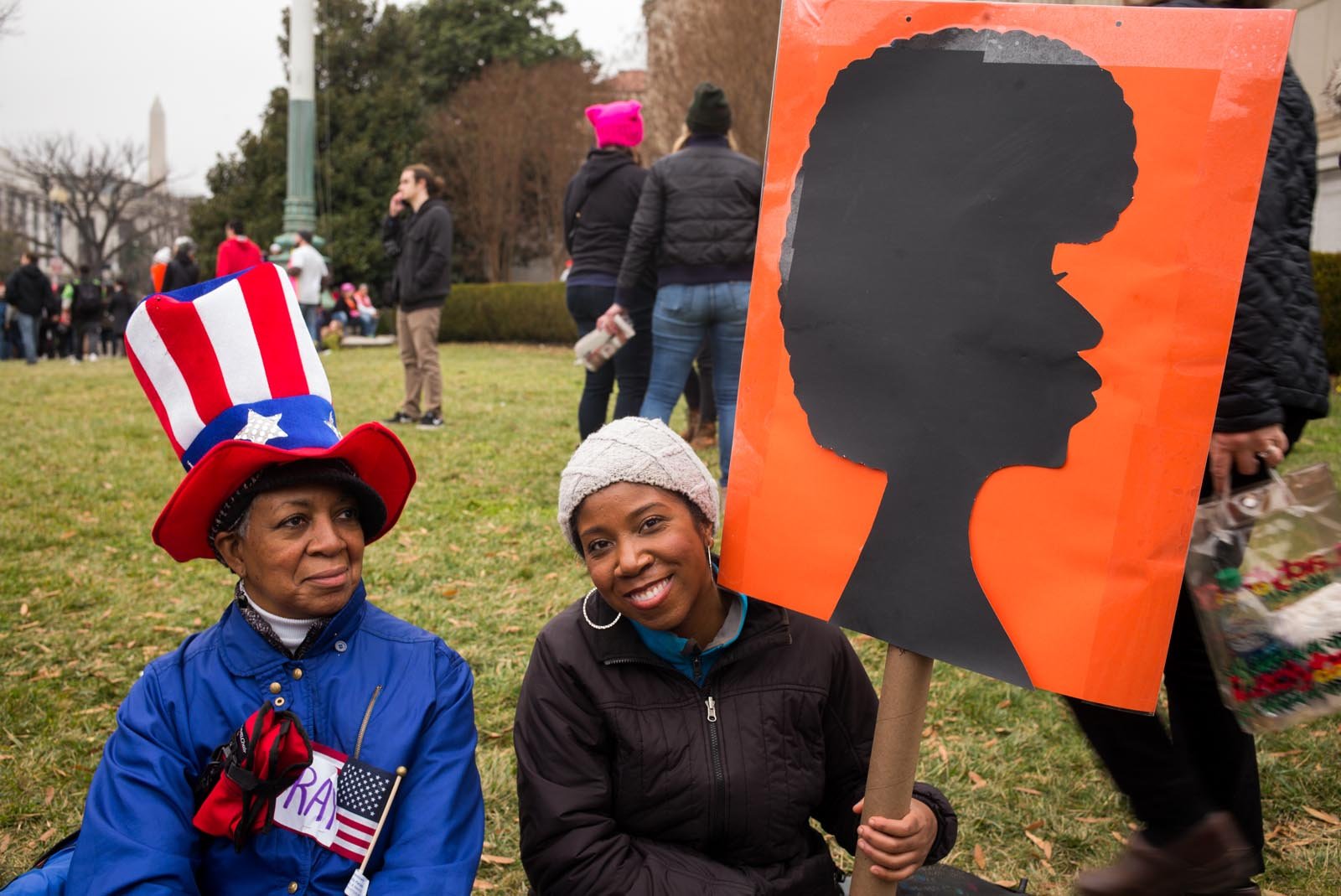 Well, silence means acceptance. I saw that on a sign, and so: No more silence.

I’m here today because, frankly, what’s happened I think is unacceptable. Too many people who are of marginalized groups, their rights are going to be eroded, and I’m not okay with it. I’m here to make sure they have a voice. 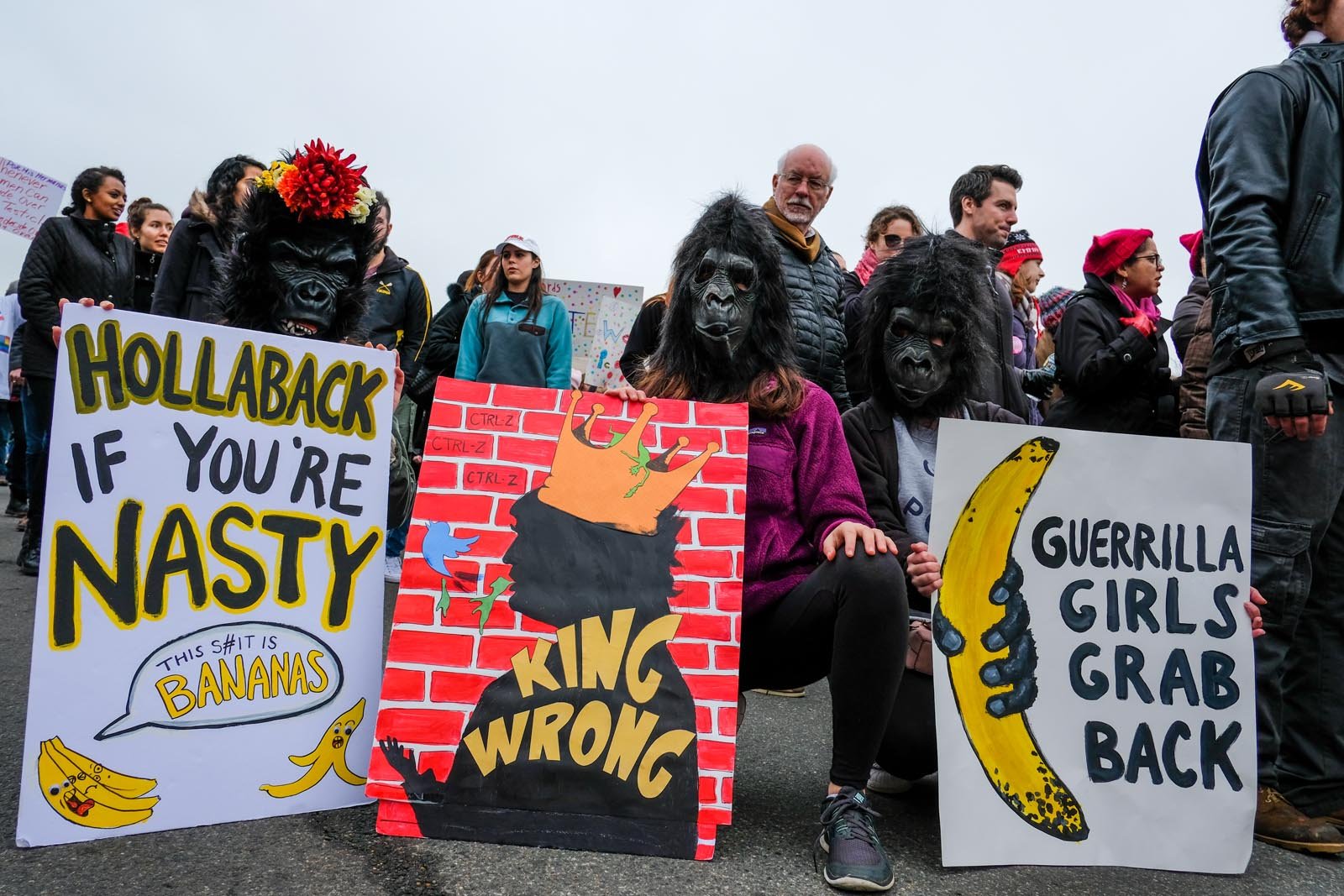 A group of 17 and 18-year-old women from Howard County, Maryland. 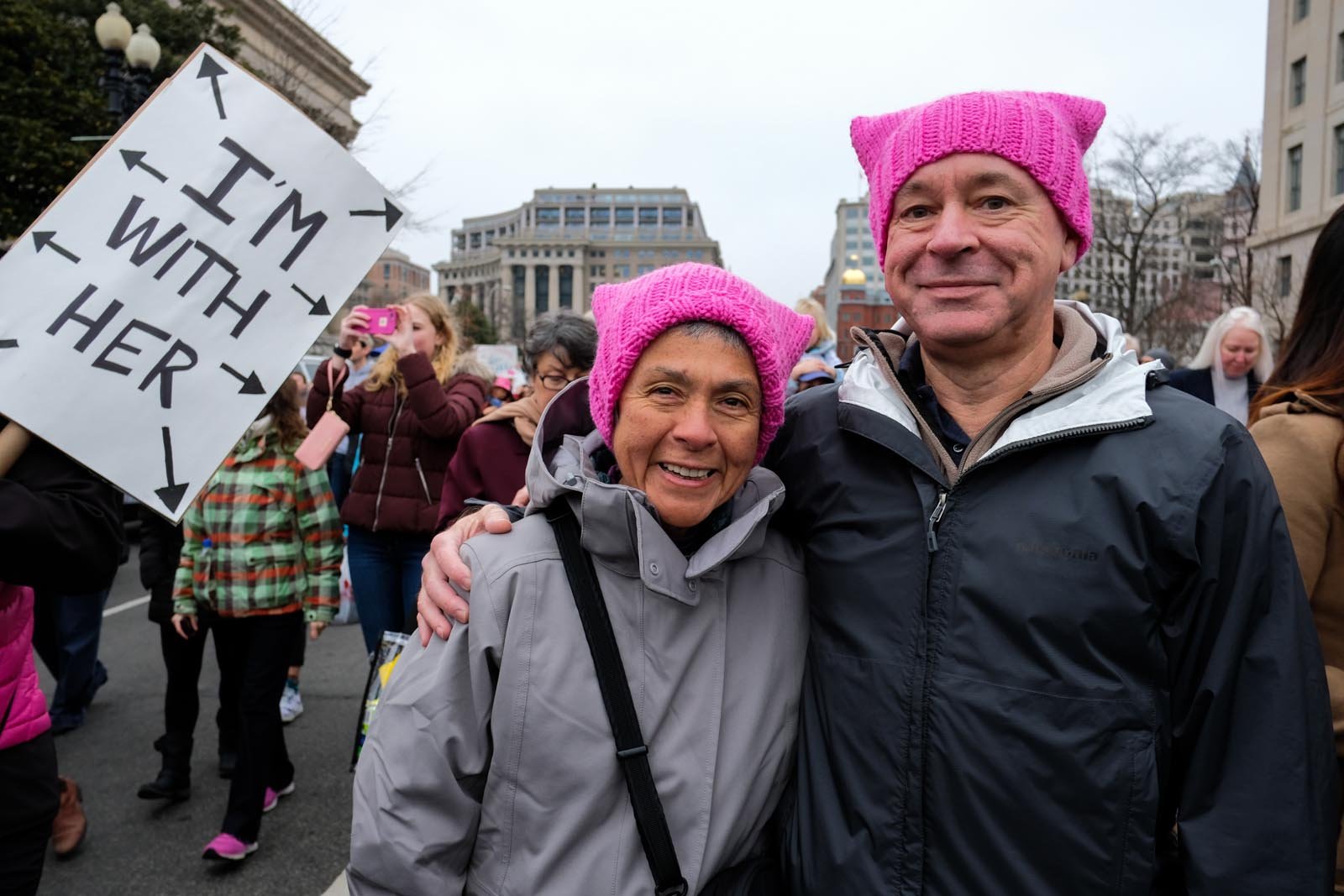 I think they asked everyone to try to wear a pink pussy cat hat. I’m with it!

We want to be positive about this—I mean, what’s done is done. I think we have to figure out how we move forward and make sure that everybody’s rights are ensured. I’m not here to protest Trump. I think that’s done. I don’t want to waste energy on that. I want to put my energies towards making this a better place.