East Coast Lifestyle earns an A+ in Marketing 101 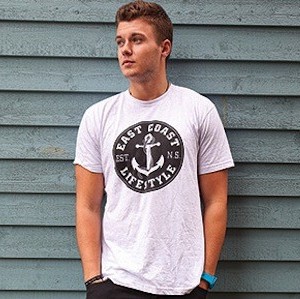 Last January, as part of an Acadia University entrepreneurship course, the marketing student launched East Coast Lifestyle, a line of casual clothing with a stylized anchor logo that evokes memories of summer days spent on the water. Atlantic Canadians became so enthralled with the brand there are now more than 11,000 photos tagged with #EastCoastLifestyle on Instagram, mostly of people “repping their coast,” as MacLean puts it, by wearing his stuff and posing from Machu Picchu to Dubai. His favourite photo is from closer to home: 26 members of a Newfoundland clan, aged four months to 84 years, wearing the matching hoodies and T-shirts they got for Christmas.

MacLean’s success is a reminder that strategies taught in business schools, such as social media marketing and social entrepreneurship, a model where businesses plan to have a positive social impact, can both quickly pay off. Michael Sheppard, the professor behind Venture Creation, teaches a systematic approach known as the “lean start-up model,” where the goal is to try out business ideas quickly and cheaply with a “minimally viable product.” MacLean had a hunch east coasters would get behind a brand meant to show off their regional pride, especially if it promised to give back to the community, so he borrowed $800 from his father and ordered 30 hoodies. While waiting for them to arrive, he prepped his social media channels and posted East Coast Lifestyle stickers all around campus. A few curious people found his Facebook page and asked what it was all about. When the hoodies arrived, he showed them the answer. The first 30 were sold mostly to friends, but the next order of 60 sold swiftly to strangers.

Spring break was coming up, so he designed and ordered tank tops and sold them to students heading south. Several in Cancun, Mexico, tagged their photos with #EastCoastLifestyle on Instagram and that’s when his social media strategy took off. MacLean reposted the photos to Twitter, Instagram and Facebook and asked his fans, “Where do you rep your East Coast Lifestyle?” More photos came in and so did more followers.

He paid back his father and donated 100 shirts to a local homeless shelter, making good on the promise he had made to give back. He made a video, set to hip hop, of his crew handing out the T-shirts, and shared it online. (He’s since done more charity work, including for S.M.I.L.E., a campus club that helps disabled children develop motor skills through athletics.)

Soon, Trey Lewis, captain of the Halifax Mooseheads major junior hockey team, messaged him on Twitter with a phone number and wrote that he wanted to place an order. Practically the whole team bought some clothing, including Nathan MacKinnon, who shared his photo on Facebook a few weeks before he was picked first in the NHL draft.

Months later, MacLean heard that even bigger sports celebrities were coming to town for training, including Team Canada captain and proud Nova Scotian Sidney Crosby. MacLean had a classmate who was working in the arena, so he asked him to take in a box of free merchandise. The friend obliged and the players dug in. MacLean ran out of large T-shirts by the time Crosby got there, so Crosby got the shirt off his back. It was a good thing he did; Crosby was photographed at a restaurant with an anchor on his chest and it was posted on Instagram, giving East Coast Lifestyle the type of publicity that usually costs big money. Sales took off. The clothing found its way to other NHL players, as well as rapper Classified, and Kim Coates, who plays Tig Trager on Sons of Anarchy.

Sheppard says MacLean’s sales were driven in part by his promise to give back. While plenty of businesses support charities, it’s easy for people to buy into the brand as a way to do so. “East Coast Lifestyle doesn’t just represent sailing and surfing, but caring for other people.”

Most of MacLean’s sales so far have been through Pseudio, a clothing chain in Atlantic Canada. Sheppard says there’s a risk that the local market will get saturated, but MacLean has a plan. After graduating in May, he’s going to drive down the east coast of the U.S. with friends and stop at beaches and festivals in Maine, Massachusetts, New Jersey, Maryland and Florida, states where he’s already filling online orders. They’ll sell merchandise, take photos to hashtag, and meet with local clothing retailers. His other strategy is to diversify; he released a new line in January, where the anchor is replaced with a snow-topped mountain. After just a few weeks, West Coast Lifestyle already had 5,700 Instagram followers and counting.