Tait, Karimi, Tremblay, Saint Pierre. The list of successful fashion grads out of Quebec is growing. 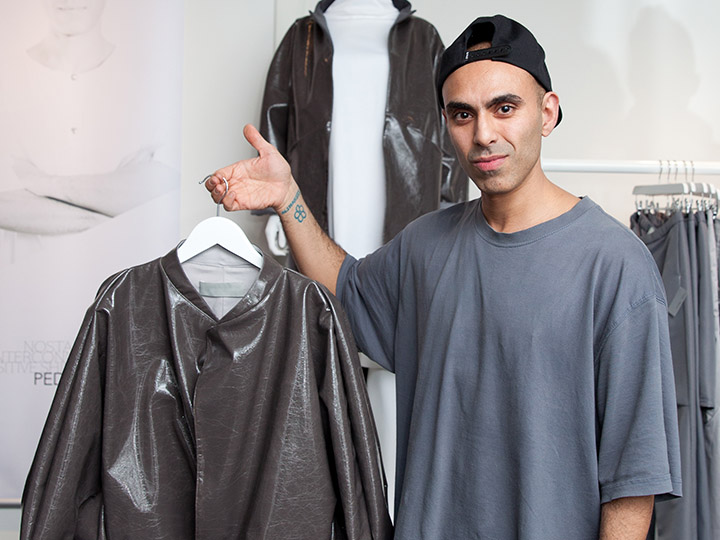 Since his graduation from Montreal’s LaSalle College, Pedram Karimi has been a vibrant international voice in gender-neutral fashion design. After placing second in the Télio competition for Canada’s breakthrough designer while still in the intensive two-year program in womenswear at LaSalle, Karimi launched his own label in 2012, based in Montreal.

Born in Iran, Karimi was raised in Austria, then Toronto. He began his fashion career “by fluke,” he says, in London, where he had been attending the Vidal Sassoon Academy, but “realized I didn’t want to be in such close proximity to clients, cutting hair.” He extended his student visa by enrolling at the London College of Fashion, where he spent two years before transferring to LaSalle.

“LaSalle College was great for learning a bit of everything, but nothing heavily focused. After all, I don’t think everyone who studies fashion design wants to be a designer. Some students rather focus on pattern cutting, some want to become seamstresses, some want to continue in textiles or illustrations.”

He says LaSalle, and all that he learned there, put him on the map, especially the Télio win. “It does have an international reputation, since they [graduates] are in many countries across the world. With Milan Tanedjikov as the creative director, LaSalle is gaining more recognition as a creative school.” Alumni include Thomas Tait, the Toronto-born avant-garde designer who now works and shows in London.

This reputation for artistic prowess has been in place for decades now, says Clara Northcott, who ran the Canadian arm of the Smirnoff International Fashion Awards. “There is a certain panache about Quebec designers,” she says, “and LaSalle has been a creative powerhouse, producing top contestants and winners. Frederic Tremblay won the international finals when he was at LaSalle.” Tremblay, who is now creative consultant at Draper James, Reese Witherspoon’s fashion line, also held senior design positions at Tory Burch and Marc Jacobs.

Susan Langdon, executive director of the Toronto Fashion Incubator—home to pearl jewellery designer and LaSalle alum Jon De Porter—is impressed by the consistent talent coming out of the school. “Canadian brands such as Mackage and Marie Saint Pierre, all LaSalle grads, are some of the country’s best,” says Langdon. “It will be interesting to see who’s next on the horizon.”

Karimi says some instructors were key to his success, including Julie Bérubé, “then my mentor and now my dear friend, and the creative director of Field of Ponies, based in London.” He also cites Jean-Claude Labonté and Hélène Cohén as instructors who nurtured him at LaSalle. “Julie encouraged me to start my own line. Jean-Claude taught me to keep a cohesive collection by using the same block to make patterns from, so the silhouettes and the overall volume and shape of the clothes become relevant to each other.”

Karimi says that, since his graduation, he’s been in contact with other students and supporting them in any way he can, “giving them my collection for their fashion-marketing projects or photo shoots or any interview or questions they reach out for.” He also acted as mentor for one final project in menswear, where students had to design for his brand.

Karimi’s aesthetic is clean and simple, in basic shapes and what he calls “quiet” colours. The secret is that the garments are genderless, as he says, until they are worn by someone. He also takes the concept of minimalism literally. “We live in a polluted and cluttered world of so much nonsense,” he says. “I don’t believe in trends and clothes that can be disposed of in a blink of an eye.” This season, Karimi collaborated with Montreal artist Luc Dubois on wearable metal sculptures for his spring/summer 2016 presentation.

Looking back at his education, he doesn’t believe fashion students need a piece of paper at all, but there is something more important they can gain from going to school. “After talent, unconditional dedication and continued hard work, what they need is connections and more connections, a great co-operative attitude. It’s all about who you know that can put you in front of someone else, with your profile and skills.”