These Careers Pay Solid Salaries, Even While You’re Training

Looking for high paying jobs in Ontario? Some skilled trades careers have starting salaries of more than $70,000! 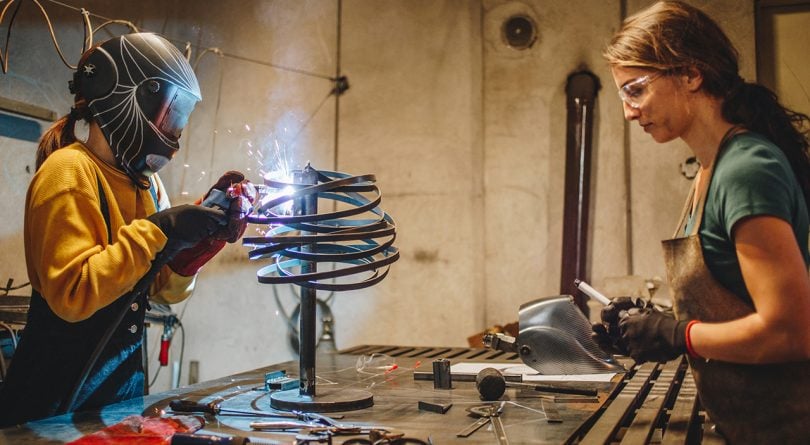 It’s increasingly difficult for Canadians to make a good living. According to a Statistics Canada report released in September 2019, more and more workers hold low-paying jobs; in fact, “between 1998 and 2018, the proportion of employees earning minimum wage grew from 5.2% to 10.4%, with most of that growth occurring between 2017 and 2018.”

The skilled trades present at least part of the solution, offering careers that combine high demand and high pay, says Shaun Thorson, chief executive officer of Skills Canada. “I think there’s still the belief that people aren’t paid that well,” he says. But that’s just not true. Some skilled tradespeople can easily earn more than $100,000 annually, especially if they take on jobs with overtime pay.

“Of course, it’s different across the country,” Thorson says. “It depends on training, occupation and region. In some parts of the country, the dollar figure is better than in other parts.” In general, there’s a surprising amount of money to be made working, “on the tools,” as tradespeople say.

“I’ve been with the Toronto Transit Commission (TTC) for about 10 years. I started as a mechanic, repairing and working on escalators all through the subway system. Now, I’m a trainer and work methods writer for the elevating devices section—I have a hand in running the apprenticeship program for the approximately 30 apprentices in this [department].

Once an elevating devices mechanic finishes their apprenticeship, they make close to $40 per hour [$78,000 per year]. But some people can make more than $100,000 per year.

And this trade seems to be recession-proof. Machinery always needs somebody to maintain it. With elevating devices specifically, we’re mandated by the Technical Standards and Safety Authority, so every escalator, elevator, dumbwaiter and freight elevator has to meet a certain point of reliability, or else it’s not in operation. So that work is always going to be there and it’s always going to be a decent paying job because no one else can work on this equipment.

Being in the skilled trades, you definitely have to be passionate. And you have to be thinking about the people coming up behind you. But once we as Canadians lose that knowledge, it’s gone. There’s already a trade shortage, but somebody has to do [these jobs], or else these machines don’t run. And there’s also the disability standpoint. At the TTC, we have a duty to move people regardless of their ability.” — Nathan Verseghy

“When I was in high school, I had no idea what being a millwright was. I actually went to the provincial skills competition for robotics. But it’s a competition for all the different trades and technology, so there’s welding, electrical, millwrighting, cooking—anything you can think of. While I was there doing robotics, I was walking around, and I saw millwrighting and I thought it looked really cool. At the time, I was debating between university and the trades, and after high school, I decided to give it a try.

There are so many different types of millwrights, but basically, they maintain and repair industrial equipment. I work at a water treatment plant, so not wastewater, but taking water from the river [and turning it] into drinking water for the city. But there’s so many different industries that you can be involved in, any production facility, manufacturing facility.

One benefit of working in trades, in my job specifically, is that I get a three-day weekend. You don’t really get that in every job as a millwright—in my last job I worked a bunch of overtime—but there are jobs out there that will offer you a good work-life balance. And then a good wage. When you’re just starting out, you might make $60,000. And it’s possible to make more than $100,000. I know people who work in the oil and gas industry who do a lot of overtime and make close to $150,000.” — Deanna Reynolds

“I started off in plumbing. I did five years of that, then I switched over to steamfitting-pipefitting, which I’ve been doing for five years. Now, I work on the industrial side, so in the mills and refineries and the nuclear plant. And I love my job. You get to build stuff, use your mind, create things with your hands. That’s what I love the most. And every day is different—you might go from working on steam lines one day to working on the wastewater treatment lines the next.

I always wanted to do something in the trades, but at the time, it wasn’t about how much money it was paying—it was the fact that it was paying. But the pay is decent. When you’re just starting out, you’re probably making $40,000 gross a year. By the time you’re Red Seal [certified by the Red Seal Interprovincial Standards Program, a national set of trade qualifications], and depending on what part of Canada you’re living in, you’re in the range of $80,000 to $100,000 on average. Now, if you hit a lot of shutdowns [when a plant or factory shut down operations for scheduled maintenance or upgrades] or you’re in a job where there’s a lot of overtime, you could end up at $300,000 a year, depending on where you are in the structure of seniority. So, can you make money? You sure can. If there’s work, you can make a beautiful living.” — Justin McGrath

I didn’t decide what I wanted to do until halfway through the summer after grade 12. In my first year [at trade school], it was rough, but after that I just kept going and I excelled in my second year. Right now, I’m doing construction. We get shuffled around, so one day it could be a simple wiring job at a house or a business, or I’ll do bigger industrial jobs on other days. I eventually want to move toward the automation side of things.” — Robbie McMahon