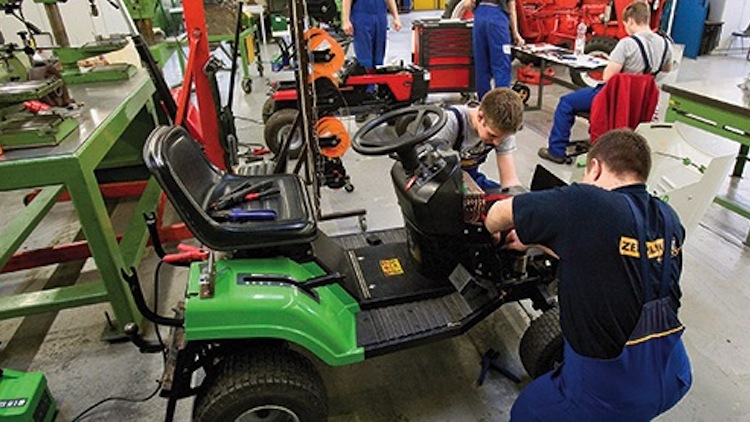 For most North American young people, the word “apprentice” calls to mind either Donald Trump’s reality-TV show, or the plumber’s assistant who helped install a new drain in the basement. But in North Carolina, it increasingly means a ticket to an advanced manufacturing job straight out of high school. The state has won numerous accolades for its Apprenticeship 2000 program, which is designed to prepare people as young as 16 for local factory jobs by following an apprenticeship model first perfected in Germany: four years of free training split between school and the workplace, and a job upon completion.

The program was first launched by the U.S. subsidiaries of European hinge-maker Blum and industrial component supplier Daetwyler. But it has since grown to include other corporate heavyweights such as Ameritech Die & Mold, Pfaff Molds and Siemens. Even U.S. President Barack Obama has endorsed the idea, lauding the German model of skills training in last year’s State of the Union address. “We need to give every American student opportunities like this,” he said.

In Canada, too, there are calls to better emulate the German model, as this country struggles with an unemployment rate of 7.2 per cent, and with concerns about a looming skills shortage in the workplace. In a recent interview with Maclean’s, Bombardier CEO Pierre Beaudoin highlighted his company’s experiences in Germany, where its rail business is based. “This is where we work in conjunction with schools, and have tradespeople who work in our company and go back to school—a combination for two or three years,” Beaudoin says. “That gives us very exceptional employees who have really great skills, from a trade perspective.”

But is Germany’s workforce really something that can—or should—be emulated on this side of the Atlantic? There’s much to be admired, starting with Germany’s unemployment rate of 5.2 per cent, less than half that of Europe as a whole. But rarely discussed are the unique characteristics of the German economy that make it all possible. There are also plenty of downsides for workers—not least of which is the prospect of being trapped in a highly specialized position that could be made obsolete by new technology or a shift in the economy. In fact, even as Western officials try to follow Germany’s model, that country is going through its own reassessment of how it trains workers.

There’s no question that, in recent years, Germany’s performance has become the envy of not just Europe, but the world. At a time when most industrialized economies have seen millions of manufacturing jobs shipped to lower-cost countries such as China, Germany has proven it’s still possible to base a modern economy on building things, as opposed to just providing services. Moreover, German companies have a reputation for making the things people crave most, from luxury cars and high-end appliances to mission-critical industrial equipment.

It’s no accident. Germany’s education system, both at the secondary level and beyond, puts an unusually high focus on vocational, or skills-oriented, training that encompasses a wide variety of occupations—everything from industrial mechanics to retail sales. Around the ages of 16 to 18, more than half of all German students opt to enter the country’s so-called “dual-system” (so named because it splits education between the workplace and classroom) by applying for training contracts with employers. If they are accepted, they spend two or three years training with a company, while also receiving taxpayer-subsidized education that’s designed to meet industry needs. A job is usually waiting for them upon completion—resulting in an unemployment rate among youth in Germany of about eight per cent, compared to 14 per cent in Canada.

In Canada, by contrast, apprenticeships are generally limited to the skilled trades—carpenters, electricians, pipefitters and the like—and attract a much older crowd with “signi?cant” labour market experience, according to a 2011 Statistics Canada study. Only about half of the more than 400,000 registered apprentices will actually complete their programs, with studies attributing the low success rate to everything from the costs associated with the in-class training (when apprentices aren’t being paid) to concerns about job prospects when they’re done. Vocational training for other jobs is often left to colleges, who may design curricula with particular employers or industries in mind. Work experience generally comes in the form of work-placement or co-op programs.

Sarah Watts-Rynard, the executive director of the Canadian Apprenticeship Forum, says a key difference between the German and North American post-secondary systems is the degree to which employers are involved. “In Germany, you have a culture where employers feel it’s not only their responsibility to train, but their right,” she says. “The education system is designed to train workers to meet employers’ needs.”

That might sound sensible—after all, finding a job is top of mind for most graduates—but it depends heavily on companies, unions and governments all working side by side. Educators base their programs on company needs and, in return, employers accept a degree of state involvement in their businesses. “BMW’s mechatronics apprenticeship program at its Munich plants will be equivalent to the Mercedes-Benz program in Stuttgart, or the Volkswagen program in Wolfsburg,” according to a 2012 report prepared for Connecticut’s Office of Legislative Research. Unions, meanwhile, agree to allow apprentices to be paid less than ordinary workers, helping to keep labour costs competitive.

It’s difficult to imagine such a close-knit troika operating on this side of the Atlantic. In North America, the relationship between unions and employers is more likely to be nasty than co-operative. In Canada, meanwhile, there may simply not be enough companies with the scale to make such schemes viable. “We have 1.1 million small- and mid-size firms, with an average size of six to seven employees,” says Nobina Robinson, the CEO of Polytechnics Canada, which represents 11 colleges and polytechnic institutes in Canada. “How much can they really invest in training? And can they really be expected to let people go to pursue the next step up? Who is going to do the job?” Watts-Rynard similarly notes that only about one in five skilled-trade employers are actually hiring and training apprentices in Canada at present.

There are also philosophical reasons why the German model may not be an ideal fit. While it offers easy access to employment at a relatively young age, it comes at the expense of closing off other career opportunities later on. In fact, the doors begin to close as early as age 10 or 11, when aptitude tests and parental guidance help sort students into vocational or academic streams. “We are a liberal society,” says Charlotte Yates, the dean of the faculty of social sciences at McMaster University. “And that means we value people having choices at various stages of their lives.”

It’s also worth noting that Germany was, as recently as 2005, still considered the “sick man of Europe.” Then, as now, its huge export sector was viewed as a bright spot, but the rest of the economy was a mess. Unemployment was rampant in the former East Germany and domestic consumption trailed other European countries, many of which were enjoying a boom in financial and other service sectors. “Over time, depending on the circumstances, their model looks better or worse,” Yates says. Even today, there are concerns about a growing number of low-wage workers in Germany, up 13 per cent between 2005 and 2010. German officials have responded by making the post-secondary system more flexible, as more German youth seek out a university education, and the higher salary and better job opportunities that often come with it.

That doesn’t mean there’s nothing to learn from the German way. While Canada talks a lot about the importance of advanced manufacturing and value-added work, many of our most important industries are still focused on digging resources out of the ground and shipping them to other countries. And for all their complaining about the challenge of finding enough skilled workers, many Canadian employers do a poor job of fixing the problem. One recent study by the Conference Board of Canada suggested that investment in employee training among Canadian companies has actually fallen nearly 40 per cent since 1993.

Perhaps the most important lesson, however, is that a successful economy doesn’t require everyone to have a university degree hanging on their wall. “There seems to be a hierarchy of education in Canada,” says Watts-Rynard. “What I take away from the German model is that there are different ways to learn. We have to recognize that, as a society, yes, we need doctors, lawyers and accountants. But you need people who can work with their hands, too.”