Students tell universities how the system is working. It’s all about class time. 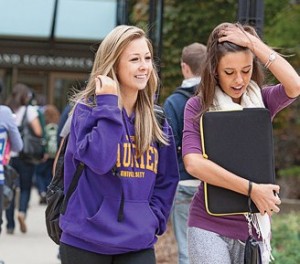 Teaching often comes second at universities—quite literally. Professors are expected to spend only 40 per cent of their time in the classroom, consulting with students, and marking their work. The rest is spent on research and other duties. The research-intensive university produces world-class discoveries to be sure, but it also produces grumbling undergraduates. The results of this year’s student satisfaction surveys couldn’t show this more clearly. The research-intensive universities for the most part do not perform as well on these student surveys.

Schools that dare to focus on teaching have risen to the top of the National Survey of Student Engagement (NSSE). Professors at teaching-focused universities like Quest, Trinity Western and King’s at Western are free to spend a majority of their time engaging with students in the classroom, the office or beyond. Considering the fact that a recent study from the University of Alberta found that the average professor is already working 56 hours per week, it’s difficult to expect them to do more. The only way they can spend more time with students is to de-emphasize research. And not all researchers make good teachers. Teaching-focused schools focus on pedagogy in the job interview, says David Sylvester, principal of King’s at Western. It’s certainly paying off for his school. Six in 10 senior-year students say they would definitely go back to King’s if they were allowed to start over, the NSSE survey found. That’s compared to only 45 per cent of students overall, and only 21 per cent of senior-year students from the University of Ottawa.

But there’s another factor affecting student satisfaction that this year’s results reveal. Small campus size matters greatly—even at research-focused schools. Students from Nipissing (pop. 4,600) and St. Francis Xavier (pop. 4,800), which both fight valiantly for research dollars, come out close to the top of the heap when students are asked by the Cana­dian University Survey Consortium if they are satisfied with their choice of university. Most schools with fewer than 5,000 students could rally more than half of their students to strongly agree that they were pleased with their decision to attend. Comparatively, only two large research-heavy schools, McGill and Waterloo, can say the same.

University administrators have long suspected that small classes and a sense of community matter to students. But student satisfaction surveys add the missing proof. The following pages are just a sample of the results of the two major student surveys that Maclean’s closely watches each year. The NSSE and CUSC are where the charts on the following two pages come from. Between them, the two surveys consulted more than 30,000 students in 2010 about the undergraduate experience—in the classroom and beyond.

The U.S.-based NSSE is a study of “best educational practices” and an assessment of the degree to which each university follows those practices. The survey looks at several elements that are considered crucial to an undergraduate’s satisfaction: stimulating courses that challenge the intellect, personal attention from professors, a sense of community and a supportive environment. Research suggests that these things don’t just make students happy—they promote learning, too.

The CUSC survey is used by Canadian administrators to assess how their schools are measuring up. Nearly 12,500 first-year students shared their views in 2010.

Combine both surveys and the picture is clear. Students who spend more time with teachers are more likely to be pleased with their education. And, for students at least, isn’t that what universities are all about?

Are you happy with your university education?

The National Survey of Student Engagement (NSSE) includes a small number of satisfaction questions—including this one, asking first-year and senior-year students to pass judgment on their university’s educational quality.

Would you go back to school at your university?

The majority of students say that they would return to the university they currently attend, but at many schools the level of agreement differs significantly—for better or worse—between first-year students starting out on their academic careers and those who are about to graduate.

How satisfied are Canada’s university students?

The Canadian University Survey Consortium (CUSC) is an annual study of undergraduates, with a focus on student satisfaction. Thirty-nine
institutions participated and almost 12,500 first-year students responded to questions about everything from academics to support services.

The NSSE and CUSC surveys include more than 150 questions. We are publishing two satisfaction questions each from NSSE and CUSC that are the broadest and most representative of the student experience. Each chart lists the universities in descending order of achievement. Responses to questions are ordered according to the percentage of survey participants who chose the highest level of satisfaction (i.e., “excellent”). The CUSC charts list 39 institutions, representing 12,488 students, that took part in the 2010 survey. The NSSE charts list 23 universities, representing 19,148 students, that took part in last year’s survey, and include the NSSE average, which is the average score for the 595 Canadian and U.S. schools that took part in the 2010 survey.

First-year student data are not displayed for Royal Roads University as it does not offer first-year courses. Similarly, there are no results for senior-year students at Quest University Canada as it is producing its ?rst graduating class as of this year.