All work and some play 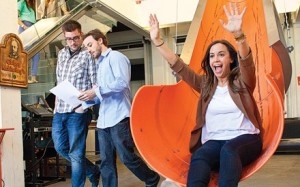 The music is spilling out the back door of Corus Entertainment’s headquarters on Toronto’s lakefront. The building’s soaring glass atrium is a kaleidoscope of green, pink and purple, the colour of women in spring dresses refracted through hundreds of wine glasses inside. Taxis pull up; men in suits open doors.

Corus isn’t a nightclub, but the multi-platform media company is celebrating the 10th anniversary of W Network at its trendy office building, which was designed with fun in mind. Even with all the eye candy, guests crane their necks to get a glimpse of the building’s centrepiece: a three-storey slide.

A few blocks northwest at Grip Limited, an advertising agency, they’re pouring beer from the office taps as workers arrive from the sixth floor via a big orange chute for the weekly get-together. Around the world—at Google in California, Lego in Denmark, Red Bull in London and online insurance company iSelect in Australia—office slides are part of the plan to attract and keep talented young workers. Two more will be built inside the University of British Columbia’s new student union building, scheduled to open in 2014.

At Corus, chief technology officer Scott Dyer oversaw the project to design and construct the ultra-modern headquarters, which opened in 2010. The building has improved employee satisfaction as measured on internal surveys. “I do a lot of tours,” he says. “One of the things I hear at the end of every tour is, ‘Are you hiring?’ ”

Jaimie Galloro, 35, watches cartoons for a living, which is also known as quality control. She uses the slide most days. “It’s a little break from our days,” she says. “When I first heard about it, I immediately thought of recess in elementary school.” And, she adds, “the novelty has not worn off.” Employees are trained in slide safety, including the red-light/green-light system that prevents pileups, and can dive down any time they want. Guests are welcome too.

Over at Grip, creative partner Rich Pryce-Jones, 44, gave designer Johnson Chou a mandate to create a “young and vibrant” space in 2006. That’s when Chou proposed the slide. “It was about creating a space that would inspire those working within it.” He was inspired by Italian fashion designer Miuccia Prada, who leaves her third-floor Milan office via tube. Chou was worried the idea wouldn’t fly with Pryce-Jones, but he was an enthusiastic supporter. “I’d always wanted to put a slide in my house, so when Johnson came back with this idea, I was like, ‘Yeah, totally, you’ve got to do that!’ ”

It added $15,000 to the budget, but it was worth it, says Harvey Carroll, Grip’s 41-year-old president. When college and university students visit, the slide is a star attraction. It was useful in attracting young talent as the company grew from 80 people in 2006 to 180 today, many of whom work on interactive ad campaigns for companies like Honda, Expedia and Labatt.

Not everyone is ready to take the plunge. Leslie Van Duzer, the director of UBC’s school of architecture and landscape architecture, says slides are part of a trend to encourage people to take a break and play a bit, which sparks creativity and new ideas. She just doesn’t think chutes are an intelligent way to do that. They can be arresting, because people expect to see them in playgrounds, not office buildings, “which causes people to reflect on their expectations.” Although “those moments in architecture can be very powerful,” slides remind her of the visual gags of the ’80s, when buildings had columns that didn’t reach the ceiling, for example. “I think most of us look back on that and cringe a little bit,” she says. “Architecture that has a joke in it just isn’t funny after you see it a couple times.”

At Grip, Chou says the slide makes sense because it reflects the company’s culture. “To call it a gag is like somebody buying a sports car and being criticized because it’s childish.”

Fad or the future, slides are fun—and fast. It takes Galloro about 10 seconds to get from her third-floor workspace to the first floor. That’s a bonus at Corus, where it means never being late for the party.